Kobe Bryant is a tough man to keep down.

Even in 2008, when Boston made his task so difficult even Sisyphus himself would have looked at him and thought, "Man, that's hard," Bryant still went off for a 36 point, 12-for-20 effort in Game 3. Through four games of this year's Finals, Bryant has hardly been invisible, but also not the otherworldly figure we saw through the first three rounds of the postseason. 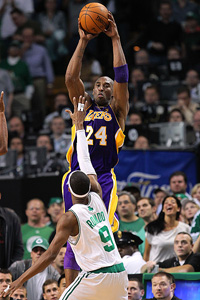 Kobe Bryant rose up with 19 points in the third quarter, but collectively, the Lakers' offense was stuck in the mud during Game 5.

Coming out of the half in Game 5, with his team down six, he was apparently ready for his closeup.

At the 10:42 mark of the third quarter, Bryant drilled a tough 15-footer for his first two points of the second half. Over the next 5:50, he'd add another 17, almost entirely off a dizzying array of jumpers. He nailed a spectacular runner, driving off the left hand, shooting back to his right. There was a three from somewhere in New Hampshire. Another with Ray Allen in his face, and a catch-and-shoot at the elbow with Allen on his hip. After struggling in the first half, hitting only four of his 12 attempts, Bryant was seven-for-nine in the third, the 19 points representing a high for any player in the 2010 Finals. In fact, Bryant scored 23 consecutive for the Lakers, dipping back into the end of the second quarter.

Dwyane Wade was picked up by the sideline camera, shaking his head in disbelief. It was classic Mamba. Except for one thing: The Lakers, down by 11 when Bryant began his assault, were still down by 11 just one possession after it ended. Despite all of Kobe's fireworks, the Lakers were giving up points in bunches at the other end. And in a completely appropriate contrast, Boston's points were decidedly easier to come by.

A layup from Ray Allen off a nice feed from Rajon Rondo. Paul Pierce waltzing past Ron Artest for a layup, and so on.

The Celtics finished the quarter making 12 of their 19 shots, a healthy 63 percent clip that, shockingly, brought down their 65.6 mark leaving the half. The Lakers' first defensive rebound of the frame came with under four minutes to play, because you don't get credit for DRB's by grabbing the ball as it falls though the basket.

They managed to restore some sense of order near the end of the third and into the fourth quarter. The ball found other players. There were Lamar Odom and Pau Gasol sightings, the defense tightened up (as did the Celtics), and if Artest had made a pair of free throws it would have been a one possession-game with 43 seconds to play.

But there was no miracle finish for the Lakers, no rabbit to pull out of the hat. The other three quarters were too much for the Lakers to overcome on a night where only two Lakers scored in double figures (Bryant with 38, Gasol 12) and the team shot under 40 percent.

That's not going to work.

Despite the need to get Andrew Bynum as healthy as possible, the Lakers may be lucky to have a quick turnover between Games 5 and 6, facing two games they obviously must win if they are to claim the series. The travel day Monday means they won't see the media until Tuesday at shootaround.

They won't hear the questions about offensive balance, and whether Kobe's heroics served as a blessing or a crutch. (Some will say he kept them in the game, others that so much Bryant is in the end counter-productive. Both are correct to some degree.) They won't hear questions about Gasol's performance, about poor defense, and so on, or about why tonight's game, and much of the Game 4 for that matter, looked so much like a page torn from the book written two years before.

We'll ask them anyway, but the Lakers won't have to answer until Tuesday night. But that will be their last reprieve. Because if in between they can't figure out how to get production from the rest of the lineup (and to make Kobe's looks easier) or to make Boston work harder for points, the questions that follow will be much more uncomfortable for the purple and gold.

BACKS AGAINST THE WALL

For the first time this postseason, the Lakers are behind in a series, and it comes in a situation where there is, quite obviously, no margin for error. For all the oft-deserved talk of inconsistency or complacency over the course of the season, the Lakers have been outstanding in games they've had to win. It was true of the regular season, and through the playoffs (heading into Game 5, at least). But none of those games were true must-wins. And aside from a Game 7 against a vastly inferior Houston team in last year's championship run, the Lakers haven't seen an elimination game since... 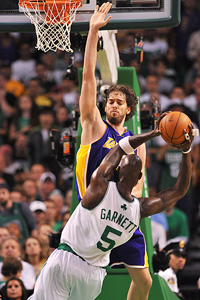 Raise your hand if you think Pau Gasol was outplayed by Kevin Garnett in Game 5.

Frankly, there's no way to know how the Lakers will play in Game 6. Or the Celtics. The frame of reference may be 2008, and it would be naive to believe the events of two years ago can't play a role in the psychology of Tuesday's Game 6. But it's a different series with different players. The Lakers are undoubtedly disappointed to head home needing two wins instead of one, after taking Game 3, but if you'd have told them in December two victories on their floor would get them a title, likely they'd have taken their chances.

Momentum is obviously with the Celtics, but given how the series has gone, how much does it matter?

17: The number of shots for the Lakers inside five feet, 12 fewer than they averaged through the first four games of the series. The Lakers took 61 shots away from the rim, and hit only 22 (36 percent). It's no secret the Lakers aren't exactly a bunch of Dell Curry's when it comes to the perimeter game, so if they're not getting into the paint, there's a good chance the Lakers aren't scoring enough. Certainly Sunday night was no different.

15: The combined point total for Bynum and Derek Fisher after the first quarter. Unfortunately for the Lakers, it was also their combined point total at the end of the game. Ron Artest was two-for-nine, Jordan Farmar took a donut in four attempts. Gasol was five-of-12, and only went to the line three times. Again, not nearly enough help.

28: Bryant's fourth quarter shooting percentage through five games (9-32), 99 possessions, and 72 touches. Like the assists number from Sunday's game, it's another indication the Lakers just aren't running any semblance of an offense. Give credit to the Celtics for not letting them, but then again nobody expects L.A. to pile up points like they're playing the Suns. As the series has gone on, L.A.'s ball and player movement have decreased, while the willingness for individual players to take matters into their own hands has increased.

It can be a self-fulfilling cycle, too. As fewer guys touch the ball, they're more reluctant to move it out of concern it may never come back. Against the Celtics, who help extremely well and have a defense designed to punish teams when the ball doesn't switch sides of the floor, this is a very poor recipe for success. The onus is on Phil Jackson to find the right scheme.

13: The number of free throws shot by the Celtics. Initially, I thought it was the one sign of good defense played by the Lakers, but considering Boston's incredibly high shooting percentage from in tight (17-of-23) and overall, the lack of free throws is more likely due to the fact L.A. rarely put bodies on anyone.

Kobe Bryant, on his teammates not getting caught up in the moment or the past heading into Game 6: "Just man up and play. What the hell is the big deal? I don't really see it is a big deal. If I have to say something to them, we don't deserve to be champions. Down 3-2, go home, win one game, then go on to the next one. Simple as that."

Lamar Odom, on the game and accompanied by what appears to be a very loud shower in the background: