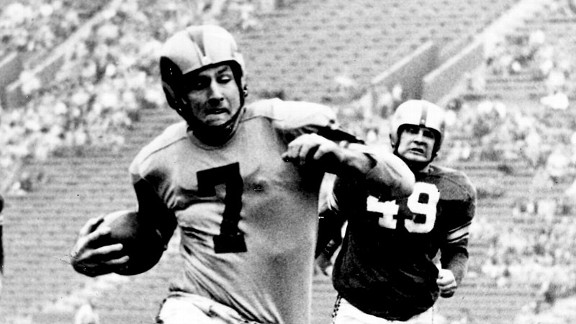 Down through the years, unless the starting QB has been a Johnny Unitas, Tom Brady or Peyton Manning, the chant has always been “We want (fill in the blank with the name of No. 2)” whenever No. 1 has struggled.

So it should come as no surprise that the Rams, in their years in Los Angeles, were subjected to the QB chants of disgruntled fans season after season.

What is surprising is that it even happened when the No. 1 guy was a future Hall of Famer with an NFL championship to his credit, the skills to make the team a perennial contender and an accomplished history in the sport in Southern California.

That would be Bob Waterfield, who went to Van Nuys High School, led UCLA to its first Rose Bowl game in 1942, went on to be drafted by the Cleveland Rams and became an instant star in the NFL.

All Waterfield did in his rookie season was lead the Rams to the NFL championship as the team’s quarterback, placekicker, punter and a defensive back.

For his efforts, Waterfield became the first unanimous league MVP.

The Rams struggled during their first three seasons in the Coliseum, going 18-15-2 without a postseason appearance. Waterfield’s numbers, strong the first year, dropped during the next two.

Owner Dan Reeves’ philosophy was to draft the best athlete available. So, even though his team had bigger problems, he selected two quarterbacks in the first four rounds of the 1949 draft: Bobby Thomason out of VMI with the first pick and, in the fourth round with the 37th selection overall, Oregon’s Norm Van Brocklin.

Thomason was soon gone, throwing only 12 passes in 1949, his only season with the Rams. But Van Brocklin was a keeper, a skilled passer who soon became one of the top quarterbacks in the league.

Van Brocklin didn’t start any games in his rookie season, a year in which Waterfield took the Rams back to the NFL title game, where they lost to Philadelphia 14-0. But whenever Waterfield got in trouble at the Coliseum, the “We want Van Brocklin” chant echoed around the stadium.

By 1950, Van Brocklin was sharing the starting duties with Waterfield. And in 1951, the two combined for arguably the most successful two-quarterback system in league history. Waterfield was the primary starter, but Van Brocklin got a huge chunk of playing time, even winding up with more pass attempts.

They were practically interchangeable. Waterfield led the league with an 81.8 passer rating. Van Brocklin was second at 80.8.

The Rams got back to the championship game where they faced the Browns. Waterfield started, but Van Brocklin threw the title-clinching, 73-yard touchdown pass to Tom Fears to give the team its first and only NFL championship in Los Angeles.

Talk about frustrating. Fans didn’t know whom to chant for that season.

When Waterfield left after the 1952 season, it seemed the controversy would be over.

The Rams drafted another quarterback, Billy Wade, out of Nashville. He only started one game in his first two seasons, but he heard his name chanted whenever Van Brocklin struggled.

When I interviewed him more than two decades later for the Orange County Register, Wade was still bitter.

“I wasn’t out there when the new coach [Sid Gillman] came in,” Wade said. “I couldn’t play golf with him in the offseason like some others could because I lived in Nashville.

“That’s why I always said they ought to just look at the record. Van Brocklin, of course, played on a championship team, but I wasted a lot of years out there just sitting on the bench.”

And so it went down through the decades.

When Van Brocklin left, Wade had to endure chants for backup Frank Ryan. The fans chanted for Zeke Bratkowski, for Bill Munson, for James Harris, for Ron Jaworski, for Pat Haden, for Vince Ferragamo.

The names change, the cities change, but never the chant. As long as you’re No. 2, you’ll become a fan favorite if and when No. 1 falters.

But if eventually you become No. 1, beware. The party may be over. The fans will still love No. 2.

Only then, it won’t be you.