Jackie Slater never won a Super Bowl during his 20-year career in the NFL with the Los Angeles and later St. Louis Rams. The closest he came to a ring was in Super Bowl XIV when the Pittsburgh Steelers beat the Los Angeles Rams, 31-19, in front of a record crowd of 103,985 at the Rose Bowl.

Slater hopes his family will finally get its first Super Bowl ring this Sunday when his son, Matthew, a wide receiver, safety and special teamer for the New England Patriots takes the field against the New York Giants.

As much as Slater would like to see himself in his son, he admits that he reminds him of one of his favorite players and teammates.

“Isaac Bruce is a guy that I want my son to play like.”

Isaac Bruce, who turned 39 in November, looks like he could still play in the NFL as he sits down in the lobby of his Fort Lauderdale condominium in a track suit after a morning workout.

In fact, the 17-year gap is so large now, that in the case of Slater, some those former players’ sons are now playing in the league.

“I knew I was the last Los Angeles Ram playing,” Bruce said. “I didn’t know I was the last guy who played for a Los Angeles team that was still in the NFL. I knew Wayne Gandy was with me and after he retired I figured, well, I must be the last one. I guess I was carrying the torch for the city of Los Angeles until my retirement. I had a marvelous, phenomenal time out there.”

While Bruce played all but one season of his 16-year NFL career in Los Angeles, he still considers the city his home away from.

He first arrived in Los Angeles as a 17-year-old kid with two duffle bags and the hope of playing college football after being overlooked by Miami, Florida and Florida State.

Bruce would play at West Los Angeles College and then Santa Monica College before transferring to Memphis in 1992. He can still rattle off street names, bus stops and restaurants around Los Angeles as he sits in his home 2,800 miles away.

“When I go back to L.A., it’s funny because I still see the busses and I know exactly where they’re going,” Bruce said. “I lived on Arbor Vitae Street and I would catch the bus right at the bus depot next to the airport. It brings back so many memories. I would walk to the rental car center, which wasn’t far from my place and they would take me to the airport. I would catch the six bus that goes to Culver City and I would take that bus to the Fox Hill Mall and that would take me to West L.A. My second year I could get on the three bus that goes on Lincoln and takes you all the way to Santa Monica and Pico and I would go to school in the morning and come home the same way.”

When Bruce returns to Los Angeles, he still goes to the rental car station next to his old dorm off of Arbor Vitae at Northrop University and eats his first meal at D&K Drive-In, which was where he ate most of his meals.

“I don’t think the owners there recognize me because when I was 17 when I would be there so much,” Bruce said. “But I go down there and sit down and it’s amazing. That’s where I first started.”

When Bruce left Los Angeles for Memphis in 1992 he thought he was leaving for good but two years later he would return when the Los Angeles Rams selected him in the second round of the 1994 NFL draft.

Bruce found out he was selected by the Rams with the 33rd overall pick by overhearing his name in the background as ESPN’s telecast of the first round was going off the air.

“Chris Berman’s on the television and the first round ends and they’re going to the second round and there’s a guy in the background and you can barely hear him and he said the Los Angeles Rams select Isaac Bruce, wide receiver, Memphis,” Bruce said. “I couldn’t believe it. I was going back to L.A. and I was going to have a car and an apartment and some money. It was a dream.” 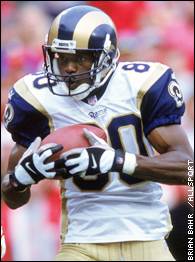 Bruce’s dream of returning home didn’t last long. He would only be in Los Angeles for one season before the team packed up and moved to St. Louis in 1995. It was a move Bruce and most of the players didn’t want to make after being accustomed to living

“Coach [Chuck] Knox didn’t mention the move much,” Bruce said. “It was in the papers and some of the veterans would mention it every now and again but I never grasped the concept that we were leaving L.A. to go somewhere else until the spring when Coach [Rich] Brooks got hired. We were still doing the minicamp in L.A. but he said we’re probably going to be moving to St. Louis. I was like St. Louis?! I don’t want to leave L.A. I loved seeing the fans and the melon heads every week. I thought when we won games, fans showed up. I loved the fans in L.A. and I didn’t want to leave L.A. I loved the weather. I had never lived in snow before and I just didn’t want to go.”

Bruce found a home in St. Louis in the spring of 1995 but spent most of the offseason in Memphis and Fort Lauderdale. Over the next 13 seasons in St. Louis he established himself as one of the greatest receivers in NFL history, being selected to the Pro Bowl four times and the All-Pro team three times and leading the Rams to their first Super Bowl win.

He was an instrumental weapon in what would be known as “The Greatest Show on Turf” as the Rams scored touchdowns with the ease of a teenager playing a video game. The mastermind behind the offense was Mike Martz, who was the quarterbacks coach and later the receivers coach with the Rams when Bruce was drafted to Los Angeles and was then named the offensive coordinator.

“The things we were doing in practice, some of the stuff he would put on the board was amazing,” Bruce said. “We would go in on Wednesdays excited to see what the game plan was. We knew we had to study because it was so intense but he had faith in us that we could run it and we had faith in him that he could come up with a game plan that no one in the league had seen. We were excited every game. It was exciting to play during that time.”

Martz, who retired from coaching after last season, said his time with the Rams was the highlight of his career.

“It’s a special place in time that I don’t know if we’ll ever see again,” Martz said. “I don’t think it can never be duplicated. It was not only a collection of talented guys but talented guys that were very unselfish. They cared about each other and cared about winning. It’s just hard to explain, there was just such great chemistry there. Nobody was worried about themselves. They were always together in everything and no one was as important to our success during that time than Isaac.”

When Bruce caught the 73-yard touchdown pass in Super Bowl XXIV that gave the Rams a 23-16 win over the Tennessee Titans at the Georgia Dome, two thoughts raced through his mind.

“The play is called 9-99, and it was my first touchdown pass against the Falcons and I celebrated like we won a Super Bowl,” Bruce said. “Well, in the Super Bowl, the same play call, same side of the field, same city, same stadium and the same catch was for the touchdown that won the Super Bowl.”

The second thought was what the Super Bowl win would have been like if the team was still in Los Angeles and how much it would have meant to all the Los Angeles Rams fans and former players that came up short time after time.

Bruce wasn’t the only one who thought about Los Angeles after the Rams won the Super Bowl in 2000.

Bruce said he’s aware of the Rams’ current situation in St. Louis where the team could leave the city and possibly return back to Los Angeles if they don’t agree on a new lease by the end of the 2014 season. Despite enjoying most of his success in the NFL in St. Louis, Bruce said it would not be weird to see the Rams leave St. Louis.

“It wouldn’t be weird to see the Rams move back to Los Angeles,” Bruce said. “What was weird was the first move when they left Los Angeles. If it were to happen, it’s the price of doing business in the NFL. I do believe Los Angeles will have an NFL team soon.”

If and when the NFL does come back to Los Angeles, Bruce said he wouldn’t mind being involved in some capacity.

“I think now is the time to bring the NFL back and if they need a general manager, I’m here,” Bruce said. “Bring me back to L.A.”

Arash Markazi is a columnist and writer for ESPNLA.com.