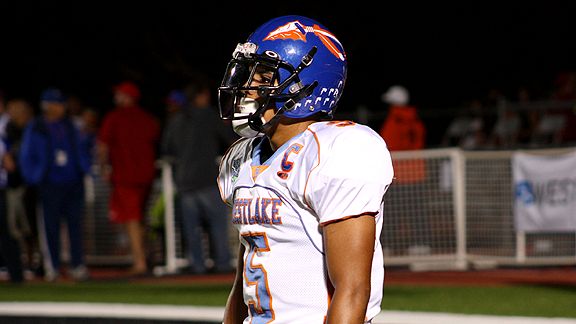 Westlake running back Tavior Mowry will be one of the offensive weapons Moorpark will need to worry about Friday.

The Moorpark football team lost only two games last season. Both were to Westlake.

The teams meet again Friday night and Westlake coach Jim Benkert knows Moorpark will be looking for a little revenge.

But Moorpark was one of the few teams that challenged Westlake last year.

“Moorpark can give us problems,” Benkert said. “There’s a lot of tradition over there. We’re expecting to play four quarters. Our kids are ready to go.”

Playing four quarters has been a rare occurrence for the Westlake starters. A good example is last week’s 56-6 drubbing of Simi Valley.

Moorpark already has two losses this season. Both losses were heartbreakers. Moorpark lost to Eastlake, 24-21, in its season opener. Two weeks ago, Moorpark lost to St. Bonaventure, 28-25, for its only loss in league play.

Moorpark is coming off a 34-7 win over Calabasas. Quarterback Grant Rohach threw for 154 yards and two touchdowns. Aaron Stanton was the leading rusher with 80 yards and a touchdown on eight carries.

The Foothilll League season opens with undefeated Canyon against Saugus. Canyon is coming off an impressive 36-3 over Dos Pueblos. Saugus has had two weeks to prepare for its Foothill League opener against the suddenly resurgent Cowboys.

On paper this game doesn’t look as if it has much appeal. The Crespi vs. Bishop Amat game is the more interesting of the two Serra League openers. But Loyola and Notre Dame are in must-win situations if either team wants to challenge for the league title.

Serra opens Mission League play on the road against St. Francis. Serra is undefeated and coming off a 48-22 win over Narbonne two weeks ago and had a bye last week. After starting the season 3-0, St. Francis has lost its last two games, the most recent, 42-28, against Paso Robles.