WESTLAKE VILLAGE -- The St. Bonaventure football team brought a sledgehammer to its Marmonte League game against Westlake. The players passed it around the sideline, each member of the defense touching it before the start of every quarter.

Something in that sledgehammer must have rubbed off on the St. Bonaventure players. It took two overtimes, two fourth-quarter defensive stands and a gutsy two-point conversion call in double overtime to beat Westlake, 32-31, ending the 22-game winning streak of the Warriors at Westlake High School on Friday night.

St. Bonaventure’s Cody Kurz said the sledgehammer represented a simple philosophy: Be the hammer, not the nail. 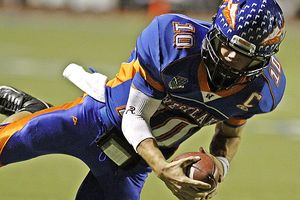 Coincidentally, it was Kurz who nailed down the victory for No. 8 St. Bonaventure, catching the two-point conversion pass from quarterback Marc Evans in the second overtime period. It was the only catch of the game for Kurz, and it didn’t even officially count statistically. But his catch set off the St. Bonaventure faithful on a celebration flurry that spilled from the stands and onto the football field.

St. Bonaventure running back Shaun Wick rushed for 119 yards and scored two touchdowns. His second touchdown of the game came in the second overtime. He scored from 10 yards out and cut the Westlake lead to one, 31-30.

Westlake, the No. 2 team in the ESPNLA.com top 25 rankings, scored on its possession in the second overtime, forcing St. Bonaventure to have to score a touchdown to keep the overtime periods and the game going.

But instead of taking its chances with a third overtime period, St. Bonaventure went for two and the win. Evans found a wide open Kurz in the corner of the end zone and gently lobbed the football to him.

He was only targeted on one other play, an incomplete pass attempt in the first half. But Therrien said after the game there was little doubt the two-point conversion play would work.

“This was our fourth overtime game,” Therrien said. “We’re 1-2 in the other three. Lost both games on extra points. Why risk it? Let’s go win the game.”

Evans was 24-of-41 for 229 yards passing. He threw two touchdown passes and two interceptions.

Wick scored on a 3-yard run with a little more than two minutes to play in the first half to give his team a 21-10 lead.

Westlake had trouble running the ball, but quarterback Nick Isham was able to get his team back in the game with three touchdown passes.

Cody Tuttle had one of his best games of the season with nine catches for 116 yards and a touchdown.

Jared Fry caught six passes for 102 yards and scored on a 70-yard punt return in the third quarter. His touchdown cut St. Bonaventure’s lead to 21-17.

Westlake took the lead, 24-21, on a 9-yard touchdown catch by Spruce in the fourth quarter.

But St. Bonaventure tied the score on a 32-yard field goal by Brandon Rominger as time expired.

Both teams failed to score in the first overtime period. Westlake had a chance to win the game, but normally reliable kicker Alex Ball missed a 36-yard field-goal attempt that sent the game into double overtime.

“We had our chances in all aspects of the game,” Westlake coach Jim Benkert said. “We didn’t put it in.”

On the first play of the second overtime, Spruce caught a 25-yard touchdown pass from Isham, who finished the game 26-of-37 passing for 378 yards.

The touchdown put Westlake up 31-24. It took three plays for St. Bonaventure to get in the end zone on its overtime possession. Wick took a pitch on a stretch play and ran 10 yards for the touchdown.