Miguel Angel Ponce is an American, but shhh. Don’t let the secret out. 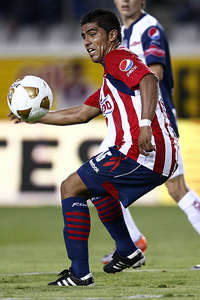 Miguel Angel Ponce struggles for the ball in a match earlier this month against Pachuca.

The 21-year-old left back, who has risen in Club Deportivo Guadalajara’s system, from the youth teams to a starting job on Chivas’ backline, knows well the guiding principle for Mexico’s most storied club. Only Mexicans allowed.

Ponce is OK with that, and should the U.S. national team come calling, it’s something he’d have to weigh very carefully before making a decision.

Ponce was born in Sacramento but moved to Tijuana, in his parents’ native Mexico, when he was still a toddler. He learned the game on both sides of the border, playing at school in San Ysidro and for clubs in Baja California and south of San Diego until he was discovered in his mid-teens at a tournament in Aguascalientes, about 100 miles northeast of Guadalajara.

He climbed from Chivas’ third-division team to its second-division team to its team in the old Primera A Division, the second tier of Mexican professional soccer, before making his debut with the big club last season. He has started all but one game during the current Apertura season as Guadalajara has started 2-2-3 in its bid to win a record 11th Primera Division championship.

“I feel so proud [of what I’ve done],” Ponce said last week. “In Mexico, playing [for Chivas] is the best thing, and I’m part of it. It’s amazing.”

Ponce, who lived on his own when he first joined the club “at 14 or 15” but was joined by his parents and brother once he was promoted to the 1A club, was back home Tuesday when Guadalajara played Chivas USA in a ChivaClasico friendly at San Diego’s Petco Park. He called the emotion of representing the most Mexican of Mexico’s clubs in front of family and friends “undescribable.”

He’s one of nine Americans with a top-division Mexican club -- and one of six that regularly plays -- but although he says he’s proud of his American background, he’s really “from T.J.”

“I was born here [in the U.S.], but in my case, my family’s Mexican, so I’m more Mexican than American,” he said. “And I’m proud I’m playing at Chivas, the team I liked [while growing up], so I try to do my best always when I am on the field.”

Ponce is aware he might one day have to choose between his native land and the country he calls home, but U.S. Soccer, to his knowledge, hasn’t inquired about him, and he’s not yet on Mexico’s radar.

“I think if Mexico or the United States needs me to play for [their] team, I’ll do what I’m doing right now …,” he said. “Chivas is a Mexican team, so you have to be Mexican to play there, so if I play for the U.S., I can’t play for Chivas.”

That would influence his decision, he admits. Another American of Mexican descent, Omar Salgado of El Paso, Texas, was forced to leave Chivas in June after accepting an invitation to play for the U.S. under-20 team. He subsequently signed with Major League Soccer and was loaned to the Portland Timbers -- which plays in the second-tier USSF D2 Pro League but will join MLS next season -- through the end of the season. Salgado will be available in next January’s MLS SuperDraft.

“He has a big future,” Real said. “He’s come to help us in a position where we had no player -- we don’t have enough left-sided players -- and as a young player, he’s still finding his way. He needs to be consistent and will get that by playing games.”

He made his sixth league start Saturday in a 3-0 loss to Jaguares, the team from Chiapas, and although Chivas has won just once in its past five league matches -- a 3-0 decision Sept. 5 over crosstown rival Estudiantes Tecos, its only competitive victory at new Estadio Omnilife -- he thinks the club is on the rise. It’s a matter of chemistry, and he’s still developing his with teammates who include World Cup veterans Omar Bravo, Adolfo “Bofo” Bautista, Jonny Magallon and Luis Michel.

Michel, the goalkeeper and captain, and Hector Reynoso, a defender and vice-captain who has been with Chivas since 2000, have become influential mentors for Ponce, talking “to me about this and that, explain to me things. … I’m proud to play [with] them.”

THAT LOSS: Guadalajara’s loss wasn’t nearly as bad as the score suggests. Jaguares, winless in its first six games this season, followed last week’s 4-0 rout of Puebla with the triumph, but it held a narrow advantage until Carlos Ochoa finished his hat trick with two goals -- with Guadalajara pushed forward in search of an equalizer -- in second-half stoppage.

GROWING GAP: The distance between the top three -- Cruz Azul, Santos Laguna and Monterrey -- is expanding, with five points separating second and third place from fourth and fifth.

Cruz Azul’s fifth straight win, Santos’ bounce-back from last week’s debacle in Queretaro and Monterrey’s second straight shutout to extend its unbeaten streak gave them a towering advantage over eight clubs with 10 to 13 points plus Guadalajara, which has nine points and one game to make up.

Monterrey (5-0-3), which has lost just three times in its last 36 Primera Division games -- and two of those were in Pachuca’s upset last May in the Clausura quarterfinals -- topped Atlas, 2-0, on goals five minutes apart from Aldo de Nigris and Humberto Suazo, who has eight goals.

The Rayados, who won last year’s Apertura and were the top seed for the Clausura playoffs, have gotten goals from Chilean World Cup forward Humberto Suazo in the last five matches.

ETC.: Toluca fans gave America forward Vicente Sanchez -- their former hero -- as much grief as possible in their showdown, which the Diablos Rojos pulled out, 2-1. on Zinha’s 78th-minute free kick. Matias Vuoso scored his fourth of the season for America. … Itamar Batista’s hat trick carried UANL Tigres past Puebla, 3-1, Los Camoteros’ second straight one-sided defeat. … Morelia has scored just two goals in five games since its 6-0 destruction of Gallos Blancos on Aug. 8. Atlante on Saturday handed the Monarcas their second successive 2-0 defeat. … Pachuca’s winless streak hit seven games with a 1-0 loss at San Luis, which has won three in a row and four of its last five. The Tuneros (4-3-1), who on Saturday play at Jaguares in the week’s most riveting encounter, got the only goal they needed from Othaniel Arce in the ninth minute. … Goal of the week had to be Jorge Zamogilny’s 35-yard rocket to the upper-left corner in Estudiantes Tecos’ 2-2 draw with Pumas UNAM.

This week's games (all times Pacific)

This week’s games (all times Pacific)

This week's games (all times Pacific)

Schedule subject (and likely) to change