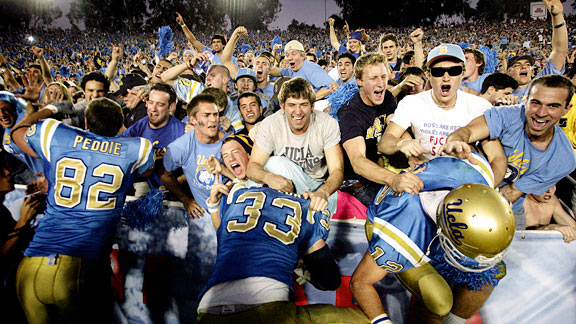 Every day this week, we'll spotlight a major moment for the Bruins in their rivalry with USC.

Some may remember Eric McNeal’s interception inside the red zone. Others may remember Rey Maualuga’s vicious blow to Patrick Cowan.

Everyone remembers the final score.

The 2006 version of the UCLA-USC rivalry produced several memorable moments and one of the biggest upsets in the history of the rivalry, and because of those things it also produced of the most unforgettable final scores in the history of Los Angeles sports: 13-9.

UCLA, supposedly undermanned and outclassed against the No. 2 Trojans, stymied a potent USC offense for most of the game and got a late game-saving interception by McNeal as the Trojans drove to the UCLA 18 with a minute, 10 seconds to play.

The stunning victory prevented USC from advancing to the BCS Championship game, ended USC’s seven-game win streak against UCLA, made McNeal a Westwood folk hero and etched into infamy that famous final score.

“I can’t say we knew at the time how big that game would be, but looking back and the way the game ended and what it meant for them, it means a lot more,” McNeal said this week. “It’s always a big game against USC but that one seems to be bigger as time goes on.”

UCLA fans printed T-shirts, flags and signs that read simply “13-9.” A favorite joke among Bruins fans asked “What is UCLA’s favorite time of day?” The answer: “8:47, because it’s thirteen to nine.” To this day, the game is known around Westwood simply as 13-9.

The Bruins entered that game with little to play for other than the chance to knock USC out of the national title picture. They were 6-5 while the Trojans won the 2004 national title, had played in the 2005 national championship game and were odds-on favorites to roll past UCLA and play in the championship game for the third consecutive year. It wasn’t to be.

The Bruins used an aggressive, blitzing defense to hold a potent USC offense at bay. The Trojans finished that season No. 18 in the nation in scoring at 30.5 points per game and had rolled their previous four opponents by a combined score of 144-43. Against UCLA, they got inside the UCLA red zone only twice.

“I just remember how we dominated their offense,” McNeal said. “They weren’t able to move the ball on us.”

At least not until late in the fourth quarter.

After Maualuga crushed Cowan on a third-down scramble, UCLA punted and USC took possession trailing, 13-9, with 5:52 to play. The Trojans drove 53 yards to the UCLA 18 and, facing a third and four, Trojans quarterback John David Booty dropped back to pass. McNeal started to blitz, but stopped.

Booty threw a pass in McNeal’s direction and McNeal raised his hands, tipped the pass with his left hand and then quickly spun around, dove and snatched the ball out of the air just before it hit the ground, preserving the upset and leaving UCLA’s eight-game win streak over USC from 1991-98 as the longest in the series.

“We knew we were better than them that year,” McNeal said. “They had a good record and everything, but we had a good defense and we knew if we executed our game plan we would be successful.”