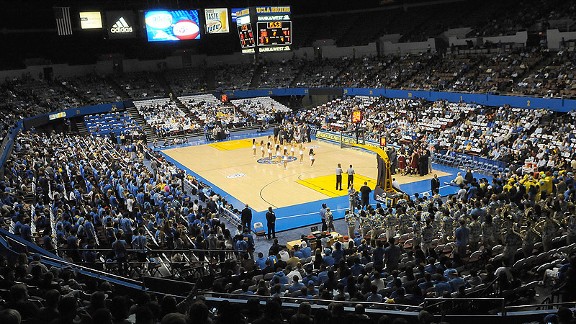 The Sports Arena, where UCLA will play most of its home games this season, was redone in Bruin Blue for the opener.

LOS ANGELES -- I was expecting the worst because that’s what I experienced for years at the Los Angeles Sports Arena.

It had been five years since I attended a basketball game at the Sports Arena and to say I didn’t miss the eyesore would be a massive understatement. In fact, I was always amazed they hadn’t razed the decaying building every time I would go to the Coliseum to watch a USC football game.

When the USC men’s and women’s basketball teams moved out of the 52-year old venue in 2006 and into the $147 million Galen Center, seven years after the Los Angeles Lakers, Clippers, Kings and Sparks moved into the $375 million Staples Center down the street, there was hardly a need to keep the outdated arena around.

The only use it has had in recent years has been to house raves and serve as the backdrop to television shows and commercials.

There was finally a need for the arena last year when UCLA broke ground on a $136 million renovation of Pauley Pavilion that will not be completed until the start of next season. When UCLA approached the Coliseum Commission late last year about using the Sports Arena as their primary home this season, the commission had already begun the process of possibly tearing down the arena and using the land to build a variety of facilities ranging from a soccer stadium to an amphitheater. The environmental impact reports for those projected plans have already been completed and one will likely be chosen next year as the fate of the land the arena currently sits on.

UCLA, of course, never wanted to have its home games this season across the street from USC’s campus and in aging arena USC couldn’t have left fast enough five years ago but they had no choice. Their first choice was the Forum but after Madison Square Garden bought the building in December 2010 for $25 million with plans to spend about $50 million renovating it into a concert-only facility, UCLA was left with little choice but to roll out their current “Road Show” plan.

The team’s poster this season says “Join The Bruin Road Show” and features pictures of the Sports Arena, which will host 14 UCLA home games, the Honda Center in Anaheim, which will have four UCLA home games, and Citizens Business Bank Arena in Ontario, which hosted one exhibition game last week. The bottom of the poster reads, “Coming to an arena near you.”

It would have made sense for UCLA to do what USC essentially did for the last 20 or so years they played in the Sports Arena -- make the most of it, hardly renovate it, while pointing toward a better home in the future.

UCLA, however, did something I never expected could be possible. They turned the arena Bruce Springsteen once called “the dump that jumps” into a respectable college basketball arena.

The change was noticeable as soon as fans exited Martin Luther King Boulevard. The arena was lit in neon blue much like Staples Center, instead of the green lights which usually bask the building. Inside, the arena had been completely repainted in blue and gold with every arena sign, fixture, pillar and post either redone or repainted in UCLA colors.

A new scoreboard, two video boards and four corner LED scoreboards were added to the building. The blue and gold court and baskets the Staples Center uses for the Sparks and the Pac-12 Tournament were brought in and remade to look like UCLA’s home court thanks to magic of stickers. 3,500 UCLA seat covers were put on the red seats in the lower bowl of the arena. And last but certainly not least the 11 national championship banners from Pauley Pavilion were brought over and are now hanging from the rafters of the Sports Arena. The school even brought over all the friendly Pauley Pavilion staff wearing their blue and gold jackets to work the games. It’s not perfect but it almost made you think of another famous line Springsteen used for one of his favorite arenas on tour -- “The joint that don’t disappoint.”

The total cost of the renovations was $200,000 and took just six to eight weeks to complete. The Sports Arena even added a surprise touch with blue carpeting around the courtside area that gave the area an NCAA Tournament feel.

“I thought they did a great job,” UCLA coach Ben Howland said. “I thought the floor looked great, the way that it’s painted. Our locker rooms look great. They did a tremendous job fixing this up for the one year that we have to be out of Pauley.”

Not only was the Sports Arena better than I ever expected it to be, even the biggest UCLA fan has to admit it’s better than Pauley Pavilion was. There’s a reason the school has shut it down for 33 months for a massive renovation. As much history as it had, by today’s standards it was a dump. The Sports Arena isn’t much better but UCLA should already be used to playing in run-down arenas that have seen better days.

UCLA will move into new Pauley Pavilion next season and can laugh about the one season they played their home games across the street from USC’s campus but during this season’s “Road Show” they might actually come to become as fond of the Sports Arena as Springsteen was.