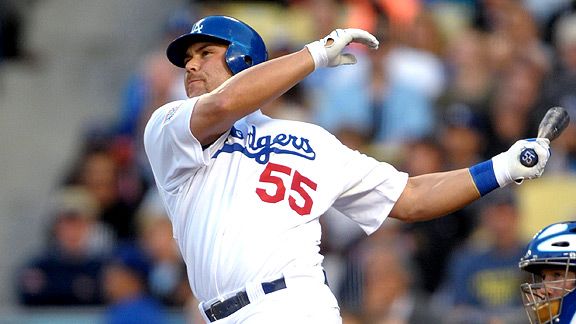 Russell Martin: Just one of the many questions the Dodgers face this winter.

The Dodger roster heading into the 2010-11 offseason, and I don't say this lightly, is a mess.

Note: Salary figures marked with an asterisk are estimates. Contract and roster information has been researched, but corrections are welcome. Minor leaguers not on 40-man roster have not been included. Cot's Baseball Contracts and True Blue L.A. were used as resources for some of the below information.

It's not a hopeless mess. But it is a mess, and it's going to take some skill from the crew in charge to clean up. It's a goop of oil and water, an unsightly combination of having to fill holes while also figuring out which rising salaries to jettison and which to risk holding onto.

Oh, and when the 2010 season ends, the No. 5 starter on the 40-man roster, at least by major-league experience, will be someone who hasn't pitched in a professional game in four months: Scott Elbert.

The Dodgers have one absolute jewel on the team: Clayton Kershaw. The team's top player won't be arbitration eligible for one more year and only figures to earn approximately $500,000 in 2011.

Then, there are a few players whose higher salaries the Dodgers won't mind paying. Chad Billingsley, who will command somewhere in the neighborhood of $6 million, knocked down many of the questions others had about him with a resurgent 2010 season. Hong-Chih Kuo will draw low seven figures, and after the way he has persevered and performed, no one should begrudge him. Kenley Jansen will make people swoon, and only receive the major-league minimum pay and meal money in return.

So much for the good news. Now, the concerns:

In sum, that's about $55 million committed to a series of question marks, some small, some large. In addition, Los Angeles owes approximately $17 million of its 2011 budget to (swallow hard) Manny Ramirez, Juan Pierre, Andruw Jones and Jason Schmidt — the price for turning past mistakes into the playoff teams of the previous two years.

Overall, the Dodgers on paper have close to $100 million -- a figure that might well be at or above their budget limit -- committed before they make a single offseason move.

Now, all is not lost. The Dodgers can and probably will gain roughly $12 million in breathing room if and when they bid farewell to George Sherrill, Octavio Dotel, Scott Podsednik and Brad Ausmus (who has said he will retire). Meanwhile, free agents Jay Gibbons and Rod Barajas should start to help shore up the bench for under $2 million combined. And it should be noted that not all of the above question marks will have negative answers.

Nevertheless, that still leaves the Dodgers at about $90 million in payroll, with John Ely as their No. 3 starter and serious questions about most of their offense. As shaky as their lineup now looks, and however aggressive the Dodgers might want to be with the latest crop of prospects, the Dodgers absolutely have to add at least two more starters, whether through free agency or trade, whether Ted Lilly, Hiroki Kuroda or outsiders.

It's for this reason that unless the team salary budget goes up, the Dodgers almost certainly will trade or non-tender a 2011 contract to at least one from the group of Broxton, Kemp, Ethier, Loney and Martin. Loney, because he has the lowest salary, might be most likely to stay – he's finishing the year as a disappointment at first base, but he's not finishing the year alone as a disappointment. In any case, all of them have something to offer other teams that might be, as hard as it is for some to digest, more willing to spend than the Dodgers are.

An Ethier trade would be a shock, for example, much more than a Kemp trade, but who can say it's out of the question now?

However this plays out, the Dodgers may well bring back many of the same players next year who boosted them to National League Championship Series appearances in 2008-09 and sunk them in 2010. In one respect, nothing will have changed: You're always hoping players move forward, like Kershaw and Billingsley, and not backward, like Kemp and Loney and Broxton and Martin and so on. Good does sometimes follow bad, after all. But still, it's going to be a nervous offseason for a lot of us.

Sure, BP had it tougher. But as cleanup goes, this is as thick a goop as Chavez Ravine has seen in quite some time.