With two weeks until the 2020 NFL draft, it's a perfect time to delve deeper into how will the Miami Dolphins land their franchise quarterback.

We continue our four-part series analyzing each top quarterback prospect and his chances of landing in Miami, especially considering that the Dolphins are armed with three first-round picks and 14 total selections. Tuesday, we discussed whether an ambitious trade for LSU quarterback Joe Burrow was a realistic option. Today, we focus in on Utah State's Jordan Love.

The expectation is the Dolphins will select a quarterback in the first round of this draft, sources told ESPN. Miami has done extensive homework on each of the top quarterbacks in the class -- Burrow, Tua Tagovailoa, Justin Herbert and Love.

Much of the pre-draft conversation around the Dolphins' future quarterback has centered on Tagovailoa and Herbert, with the assumption Burrow is drafted No. 1 overall by the Cincinnati Bengals. But there is another intriguing option in Utah State's Love -- a high-potential prospect whose 2019 production and decision-making proved disappointing.

ESPN's Todd McShay made a bet with ESPN's Mel Kiper Jr. that Love will be drafted before Herbert. The Dolphins have checked in with Love at every step of the pre-draft process, and that leads us into our question: Could Love's upside make him a surprise Dolphins pick?

'Talent is better than the tape'

In last month's Dolphins' quarterback checklist, Love ranked second slightly below Tagovailoa but ahead of Herbert in terms of being the best fit for the Dolphins because of his physical traits and ability to overcome adversity. There is reason to believe Love cannot be ruled out for Miami, even if that grading scale changes. 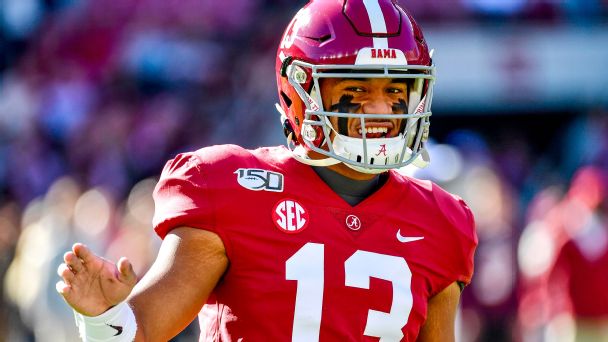 With three first-round picks and 14 total selections, Miami is in rebuilding mode:

• Is Justin Herbert the right fit for Miami?
• Trading up for Joe Burrow realistic?
• Could Jordan Love be a surprise pick?
• ESPN+: Will Tua be available at No. 5?
• NFL draft coverage | More Dolphins »

Love's upside is what has some NFL teams intrigued. At least a few times every game, Love makes a "wow" throw or play on the move that allows scouts to envision him being a strong NFL starter.

Love also had a rough 2019 season at Utah State, during which he threw a FBS-high 17 interceptions -- many of them because of poor decisions, not seeing defenders or being slow on his reads -- compared to 20 passing touchdowns and a 7-6 record. It was a troubling drop-off from 2018, when he popped up on NFL teams' radars with a strong season by throwing 32 touchdowns to six interceptions and an 11-2 record.

But some NFL scouts say Love's surrounding talent and coaching-staff changes caused him to force more throws. Those who believe in him say that with good development, he will be better in the NFL than he was during college.

"Elite-level arm talent, [but he's] just more of a project," an AFC scout told ESPN. "Not a high-level processor, yet. He has some moxie and confidence. Has to chance to be really good. Talent is better than the tape. But the talent is real."

Is Jordan Love worth a top-ten pick?

Dan Orlovsky is high on QB Jordan Love, who is now projected No. 6 in Todd McShay's latest mock draft.

The Dolphins have expressed clear intrigue with him during their meetings at the Senior Bowl and at the NFL combine. Miami also hosted Love for a pre-draft meeting at the team facility (prior to the NFL's canceling those meetings because of the coronavirus pandemic), and Miami held a video-call meeting, a source told ESPN.

If you were to handicap the likelihood of quarterbacks to land in Miami, the projection would have Love come in third behind Tagovailoa and Herbert, but that's a lot of contact for a team to have with a player who isn't among the top options.

Love would also seem to be a good fit in Dolphins offensive coordinator Chan Gailey's scheme partly because of his mobility, arm talent, smooth release and ability to flourish on off-script plays.

The Dolphins selecting Love as their future franchise quarterback would certainly be a bold, head-scratching surprise, but Miami is clearly intrigued with his skill set.

Love has been widely considered the fourth-best quarterback prospect by many analysts, including Kiper, but some such as McShay and ESPN NFL Matchup producer and analyst Greg Cosell have Love slotted higher. Cosell said on "The Rich Eisen Show" that he would "potentially take Love over Tua" and he "would take Love over Herbert."

It has been 20 years since the Dolphins had a true franchise quarterback (Dan Marino), and it would be an eye-opening bet for Miami to put its most promising hopes since then into a quarterback who didn't dominate at Utah State and whom many consider a project type of player.

But what if the risks of Tagovailoa's health or Herbert's leadership scares Miami? Or, if a team such as the Los Angeles Chargers trade up to get Tagovailoa or Herbert, leaving Miami out of its top options? Those are contingencies the Dolphins must prepare for on draft day.

If one of the above scenarios occur, the Dolphins' options to land Love could include trading back a handful of spots, collecting more picks and still drafting their quarterback or selecting an elite prospect at No. 5, such as Clemson linebacker Isaiah Simmons or Alabama offensive tackle Jedrick Wills Jr., then trading up from No. 18 to land Love.

One NFL scout said he would feel comfortable taking Love outside of the top 15, while noting that the Mahomes comparison was too much. He cautioned a team not to expect Love to start in Year 1, but that he could be special in time if developed correctly.

The Dolphins shouldn't settle at quarterback, so if they take Love it should be because they really love him and want him. If the Dolphins get leapfrogged by another team for their preferred quarterback, then a trade back for Love makes some sense as a backup plan. But, if everything goes well for the Dolphins, it shouldn't get to that point. Love to Miami seems to be an unlikely, yet not unforeseen, result.