DAVIE, Fla. -- After a nearly one-month search, the Miami Dolphins decided Eric Studesville and George Godsey will run their offense as co-offensive coordinators.

The general public reaction was ... two coordinators? What are we doing here?

They will bring continuity and fresh ideas 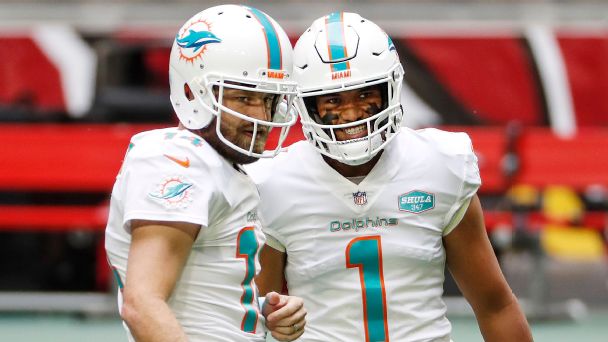 The candidates chosen should not have come as a huge surprise. ESPN reported three weeks ago that Studesville and Godsey were two of five candidates interviewed. External candidates (Pep Hamilton, Matt Canada, Mike McDaniel), and even those who were rumored to Miami but did not interview (Buffalo Bills quarterbacks coach Ken Dorsey and Kansas City Chiefs quarterbacks coach Mike Kafka), were among the more glamorous names.

Outside of Studesville and Godsey, none fit what Dolphins coach Brian Flores wanted. Promoting the pair from within means Miami's offense will have continuity coupled with new ideas and flexibility, which should prove to be an asset for Tagovailoa entering Year 2. For those dissecting what every move means for a potential Deshaun Watson trade with the Houston Texans, promoting Studesville and Godsey leans more toward building around Tagovailoa than placating Watson.

The biggest takeaway with regard to offensive scheme is Flores didn't think all of the Dolphins' 2020 offense was bad. Flores likely wants to run some of the run-pass option principles that were successful under former coordinator Chan Gailey. Studesville and Godsey give the Dolphins two younger but experienced coaches who will adjust to specific personnel, run an offense that features tempo, shifts and motions, and ultimately employ a better blend of college and pro-style offenses.

The best part about having two people running the offense is the versatility in game-planning ideas. A Studesville-led plan could look different than a Godsey-led one -- and opposing defenses will be on their toes because they won't know what is coming.

Also, the Dolphins' offensive players won't have to learn a new scheme. Godsey and Studesville will likely pick pieces they like from Gailey's offense, expand upon them and add their own.

Who will call the plays?

It might take some time before we know which coach will call plays, but the Dolphins thought it important enough to make Godsey and Studesville co-offensive coordinators so that they had equal responsibilities. From a team perspective, the benefits include minimizing pressure when things go wrong as both coaches would shoulder the blame, and it also could lessen the likelihood of another team hiring them away.

The New England Patriots have a history of giving coaches playcalling responsibilities without the title, such as what happened in 2009 to Bill O'Brien when Josh McDaniels left for Denver. O'Brien remained the Patriots' quarterbacks coach in title, but he also assumed most of McDaniels' responsibilities, including playcalling. Flores was the Patriots' defensive playcaller his final season in New England, but he never received a coordinator title.

It's possible Flores adopted some of these principles from his New England days, though split roles aren't new or exclusive to the Patriots' tree.

As of now, there is one co-coordinator situation in the league: The Minnesota Vikings have Andre Patterson and Adam Zimmer as co-defensive coordinators, and coach Mike Zimmer calls defensive plays. The most recent co-offensive coordinator setup was the 2016 Chiefs with Brad Childress and Matt Nagy. Though coach Andy Reid called plays there, Childress and Nagy had significant roles creating the game plans and they went 12-4 that season.

A few other teams have bypassed having an O-coordinator and have used pass- and run-game coordinators instead, with an offensive-minded head coach calling the plays. The 2018 and 2019 Los Angeles Rams, 2019 San Francisco 49ers and 2020 Philadelphia Eagles all fell into this category. The 2018 Rams and 2019 Niners made the Super Bowl, each with the No. 2-ranked scoring offense.

Multiple NFL teams have used a primary playcaller, then had another coach step in to call plays on specific situations such as run downs, two-minute drill or red zone.

Although game-to-game changes in playcalling is a mind-blowing idea, at some point it likely has to be delineated which coordinator will handle this role. It helps that coach get prepared, get in rhythm and makes clear who has the hard decision on fourth-and-goal late in the fourth quarter. Studesville and Godsey split playcalling duties at the 2021 Senior Bowl, and the Dolphins view both as capable of handling the role.

What to know about the Studesville-Godsey combo

Godsey, 42, spent the second half of the 2020 season coaching Tagovailoa, and that familiarity with the quarterback played a notable role. He also spent two years calling plays as the Texans' offensive coordinator (2015-16). Houston's scoring offenses ranked 21st and 28th, respectively, but they won the AFC South both seasons with quarterbacks Brock Osweiler and Brian Hoyer starting most of the games.

The relationship between Flores and Godsey is important, too, as they worked together with the Patriots from 2011 to 2013. Godsey said last year he has talked to Flores every day since they met each other. Godsey, who coached the Dolphins' tight ends the past two seasons, helped develop Mike Gesicki into one of the league's better tight ends.

A run game is a quarterback's best friend, and Studesville, 53, figures to bring his own perspective being an essential asset over the past 20 years with Miami, Denver, Buffalo and the New York Giants. He has coached three running backs to Pro Bowl seasons (Marshawn Lynch, 2008; Willis McGahee, 2011; C.J. Anderson, 2014), and he has coached backs to 10 different 1,000-yard seasons. Studesville maximized the Dolphins' backfield last season, as 2019 seventh-round pick Myles Gaskin and undrafted rookie Salvon Ahmed formed a solid combo by season's end.

"He's been someone that I've been able to lean on," Flores said of Studesville in November. "He's a great coach. He's got a coordinator and head-coaching future. The players gravitate to him."

For the co-offensive coordinator system to work, Flores has to be clear about defining roles and enforcing collaboration. Egos can't grow too big, desiring praise or getting upset if their ideas aren't used. Studesville and Godsey are humble guys who have worked together for the past two seasons.

It will be important to watch how the offense evolves from the Gailey era -- how Tagovailoa responds, what changes, what stays the same, how much more tempo and how many fewer RPOs. Eventually, it has to be clear who the playcaller is -- at least to the players and coaches.

Finally, Studesville and Godsey will have more say in player evaluation, so it will be intriguing to see which players emerge in bigger roles, which guys are released and who they target in free agency and the draft to fit their vision for the offense.

It's not a bad bet to lean on two hungry assistants who have good chemistry with young players, as well as the perfect combination of expertise and flexibility to build a better offense together.

Studesville and Godsey as co-offensive coordinators is everything the Dolphins are under Flores -- somewhat unorthodox, a bit surprising and always improving.

Stay tuned in 2021 to see if the improvement continues.