ATLANTA -- No longer just the place where the players play, Atlanta is a spot where teams come to get battle-tested.

The Vikings continued their dominance on the road and extended their win streak to eight after beating the Falcons 14-9.

It wasn’t Minnesota’s prettiest win, but in terms of what this means for the Vikings’ own playoff destiny, the victory was a major statement.

"It's always good to get hot late," wide receiver Stefon Diggs said. "We don’t want to be hot too early ... [Atlanta is] jelling right now. They’re playing some good football. To come out here and do what we can and get it done is huge, especially for this team in the direction we’re trying to go."

As the only team that entered Week 13 ranked in the top five in total offense and defense, the Vikings did not resemble the NFL’s most balanced team. The offense was more methodical and conservative than it has been in recent weeks, while the Vikings’ dominant pass rush didn’t generate a ton of pressure on Matt Ryan. For the first time since Week 7, Minnesota did not register a sack.

Still, for a team with aspirations of playing in Super Bowl LII inside its home stadium, the Vikings took care of business by beating last season's NFC champion and hold critical head-to-head wins over Atlanta, Los Angeles and New Orleans. That could play an important role in the conference playoff picture down the stretch if currently top-seeded Philadelphia runs into roadblocks.

What it means: The Vikings said it all week leading up to this NFC showdown: In order to be the best, you need to beat the best. At 9-2 entering this game, Atlanta wasn’t make or break for Minnesota’s playoff chances, but the Vikings took a critical leap forward in controlling their own path toward the postseason. They stifled the Falcons' hot streak and held their explosive offense to its second-lowest game in points after Atlanta put up 95 in three previous wins.

What I liked: The "Tay Train" powered through once again. Atlanta’s run defense had given up 112.3 yards in its past three games entering Week 13, and while it hasn’t allowed a 100-yard rusher all season, Latavius Murray came close. Vikings offensive coordinator Pat Shurmur capitalized on Murray’s hot hand on several drives when he got the ball on consecutive plays. Murray finished with 76 yards on the ground and was the best he’s been in the passing game all season. His three receptions on Sunday are the most for him as a Viking and the most he’s had since he and the Raiders beat Buffalo last December. Murray set up Jerick McKinnon in a big way in the second quarter, getting the Vikings into the red zone to set up their first touchdown.

And while Minnesota's pass-rushers may have struggled a bit in getting to Matt Ryan, the Vikings held their own as the best third-down defense in the league. Atlanta was held to one third-down conversion on eight attempts, which included a big pass breakup from Mackensie Alexander late in the first quarter which set the tone for the rest of the game.

"We were just very focused today of getting off the field on third downs, trying to get the offense on the field as much as possible and keep ourselves off the field," linebacker Anthony Barr said. "One play with those guys and it could turn ugly." 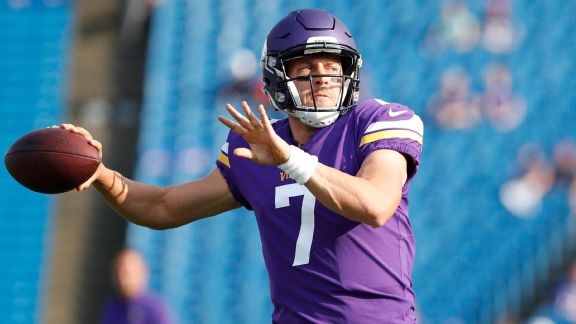 The Vikings' goal is to make history by becoming the first team hosting the Super Bowl to play in the big game. Read.

What I didn’t like: The Vikings' offense may have appeared conservative on Sunday, but the game plan worked out exceptionally well, especially in the second half. Case Keenum was 18-of-18 for 198 yards and a TD between the painted field numbers on Sunday, according to ESPN Stats & Information. A lot of where the ball was thrown was dictated by the game plan, knowing that the zone scheme Atlanta runs was bound to give up some space underneath on the outside.

This should have been a game in which Adam Thielen and Stefon Diggs dominated, as the Falcons were without cornerbacks Desmond Trufant and Brian Poole. Keenum appeared to leave both of his top receivers open a little too often but was able to compensate by getting seven other players involved in the passing game.

Rhodes vs. Jones: A week after tacking on 253 yards and two touchdowns, Julio Jones was much less productive against the Vikings. Minnesota’s top corner, Xavier Rhodes, held Jones to two catches for 24 yards and no touchdowns after he was targeted six times.

What’s next: The Vikings' three-game road stretch ends next week at Carolina, where they’ll receive another test. Once Minnesota clears this hurdle, its road is considerably smoother with Cincinnati, Green Bay and Chicago to close out the regular season.