When NFL teams wanted to learn more about Case Keenum ahead of the 2012 draft, scouts and general managers had several resources.

And when teams wanted to get a feel for Keenum's character and who the person was inside that helmet, they turned to Mikado Hinson.

The Eagles upset the Patriots to secure their first Super Bowl victory.

• Eagles take crown » | No Pats' comeback »
• How Eagles beat Pats at their own game »
• Inside 'Philly Special' fourth-down call »
• Tom Brady was brilliant, left broken »
• Officiating grades » | All the records »
• The biggest moments from the game »
• What should Philly do with Foles? »
• Now what? Execs debate Pats' future

Few people know the inner workings of what make Case Keenum tick as well as Hinson, the former team chaplain at the University of Houston from 2000-2014 who, over the years, became one of Keenum's closest friends. Every Sunday morning, Hinson's phone buzzes about 8 a.m. (sometimes later depending on when the Minnesota Vikings play). It's Keenum calling to share in a short prayer as part of his game day routine.

Hinson was with Keenum every step of the way throughout his illustrious college career. The two were initially led to one another through the Fellowship of Christian Athletes. Keenum attended FCA camp as a middle and high school player and joined up with the organization immediately after he arrived on campus as a freshman. Hinson had gotten to know Keenum well during his recruitment and quickly took the quarterback under his wing.

They shared in an abundance of wonderful moments that became treasured memories, such as their summers traversing the state -- the "Texas tour" as they called it -- so Keenum could lend his time as an FCA counselor and tell his story at banquets in Abilene, Corpus Christi and Tyler.

Keenum's record-setting years as the Cougars quarterback earned him national recognition at every turn. A picture from one of the many award ceremonies that they attended of Hinson and the quarterback all gussied up in their tuxedos sits on the desk in Hinson's office. It was actually Hinson who predicted that Keenum would marry his longtime sweetheart.

Some of the happiest times of Keenum's life have been witnessed and shared with one of his biggest supporters. But like the truest of friendships, Hinson was there at Keenum's lowest, unafraid to exert tough love to get his friend on track.

One of those moments came three games in to the 2010 season, Keenum's senior season. When scouts and GMs wanted to know how Keenum dealt with hardships, this is the story Hinson would relay.

Coming into the season as a Heisman Trophy hopeful, Keenum tore his ACL in the second quarter at UCLA trying to make a tackle after an interception.

"I almost ran on the field, but I knew I would have gotten a penalty, so I kept my butt on the sideline," Hinson said.

In the weeks after the injury, Hinson saw Keenum fall into a dark place. The star quarterback whose rise he witnessed up close was a shadow of himself.

"He lost a bunch of weight, was unmotivated," he said. "He felt like this was his senior year, and he was never going to have a chance to play again."

One day after surgery before Keenum was able to drive himself, Hinson picked up the quarterback at his apartment to bring him up to the school to do his rehab. The two later found themselves in a meeting room where Keenum pulled up the play when he got injured so they could watch it over and over and over. The quarterback kept rewinding the film, picking apart every single move retrospectively as if blaming himself for his decision on that play was going to change what happened.

I should have checked out of that play.

We (UCLA linebacker Akeem Ayers) looked at each other, we made eye contact. I knew I should have changed that play but I ran it anyway.

Keenum kept going back and forth in his self-blame until Hinson had finally heard enough. 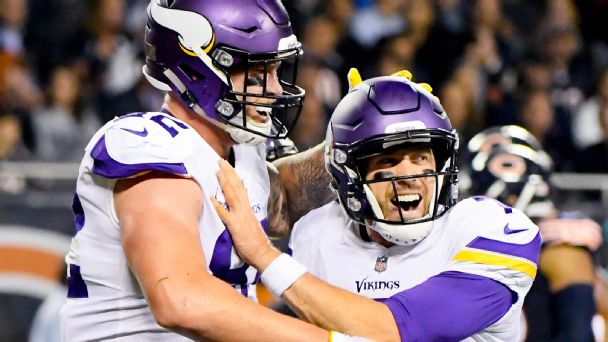 Read about Case Keenum from those who know him:

Hinson said Keenum kept lamenting about how he felt his window of opportunity in college football was over.

At that point, Hinson couldn't hear another word.

"I finally just said, 'you know what, bro? I'm leaving because to be honest with you, I'm tired of you being down and depressed. Look, get over it,'" Hinson said. "We had a come-to-Jesus meeting to the point where I pointed in his face and told him he needed to get it together."

Hinson left Keenum in that room by himself. For how long, he still doesn't know. Frankly, he didn't really care how long it was. He said what he needed to say.

Apparently, that was the wake-up call Keenum needed.

"You almost saw him go from the pit, the valley of the snare, to finally something clicking," he said.

"From then on, I saw him starting to get out of that funk, take his rehab seriously. After that, he started getting back to normal Case."

There were multiple silver linings that came out of Keenum's knee injury. Houston petitioned his situation to the NCAA, which in turn granted him a sixth-year of eligibility in 2011. By the time he left Houston, he broke nine FBS passing records that still stand to this day.

More importantly, the adversity he faced in fighting his way back solidified his love for Kimberly, who helped him through the arduous parts of his rehabilitation and stood with him every step of the way. Before the next season, the two solidified their union in marriage. Hinson officiated the ceremony.

In a moment that could have broken him, Hinson witnessed the true depths who Keenum really is. This, he feels, was his defining moment as a man.

"He's always stayed true to his roots, regardless of whether good things are happening to him or the bad things," Hinson said. "That's what makes him who is he is. When people start screaming your name and cheering for you, or even when they don't, do you change?"