Minnesota Vikings quarterback Case Keenum was one of the biggest surprises of the 2017 season, evolving from journeyman to MVP candidate.

We asked our panel of ESPN NFL insiders to give us their thoughts.

Who will be the Vikings’ primary starting quarterback in 2018?

Courtney Cronin, NFL Nation Vikings reporter: I used to think Bridgewater took priority over Keenum in terms of how the Vikings view their long-term plans at quarterback. I’m not so sure anymore, even after Keenum’s clunker in the NFC Championship Game. Keenum did a lot to earn the job going forward, including winning a playoff game. Despite Pat Shurmur being all but signed, sealed and delivered to the New York Giants as their next head coach, the Vikings' offense is going to look very similar to how it does now, aside from the expected retirement of right guard Joe Berger and possibility of Jerick McKinnon getting a deal elsewhere in free agency. Minnesota has the core of its playmakers coming back next year, including the return of Dalvin Cook.

The Vikings will go after an offensive coordinator who will build his system around his personnel just like Shurmur did, so it’s not hard to imagine Keenum having continued success under center in Minnesota. Plus, I’m not so sure I believe the Keenum-Shurmur package deal will come to fruition after all. New York can stick with Eli Manning, who is under contract for two more years, have last year’s third-round pick, Davis Webb, next in line and can use the No. 2 overall pick on a quarterback if it so chooses. The other question is this: If Keenum is the Vikings' starter in 2018, what happens to Bridgewater and Bradford? Both believe they can be starters, but will the Vikings be able to convince one of them to return as a backup next season?

Matt Bowen, NFL writer: Keenum’s ability to thrive in Shurmur’s offense put the Vikings on the door of the Super Bowl. But with Shurmur reportedly leaving to take over the Giants, I expect the Vikings to let Keenum test free agency. Look for the veteran to earn starting money on the market and for Minnesota head coach Mike Zimmer to re-sign Bridgewater as the front-runner to land the starting job in ’18 after a full offseason of work.

Domonique Foxworth, The Undefeated senior writer: Keenum will be the guy. The Vikings will not commit to Bradford because of his injury history. Because of Bridgewater’s age (25) and his potential to improve, he will get some serious consideration, despite injury concerns of his own. But in the end I can’t see the Vikings going away from Keenum, who has played well this season, and opting for Bridgewater, who has thrown only two passes since 2015.

Dan Graziano, NFL writer: I predict that Bridgewater will lead the Vikings in quarterback starts in 2018. My expectation is that they re-sign him and Keenum, but that Bridgewater (a favorite of the coaching staff) either wins a training camp competition to begin the season as the starter or ends up taking over the job at some point during the season. I still think the Vikings view Bridgewater as their long-term guy and don’t think he has had the chance to fully develop into that role yet. 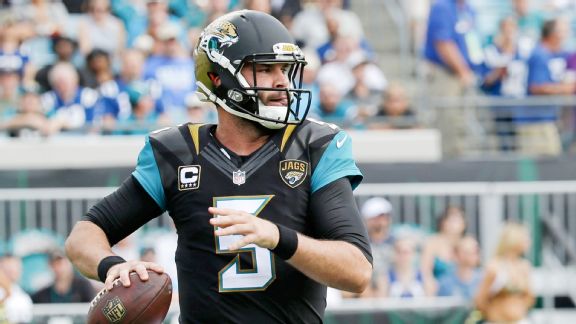 Despite leading the Jaguars on an improbable playoff run, Blake Bortles' future in Jacksonville remains iffy. See how our insiders expect the situation to play out.
• Read »

Kevin Seifert, NFL writer: There is still great loyalty and sentimentality within the organization toward Bridgewater. He would have been starting by the end of the season if Keenum had done anything other than play at the highest level imaginable for him. But the Vikings' deep playoff run changed the calculus. I now wonder if the Vikings can avoid moving forward without Keenum. Bridgewater's steady personality more closely matches Zimmer's ethos, but the organization might have tipped its hand in deciding to leapfrog Sam Bradford over Bridgewater on the playoff depth chart.

Cronin: Keenum has earned himself a big payday for his next contract and will earn starter money in 2018. When free agency hits, expect a handful of quarterback-needy teams to come calling in addition to the Vikings. In the end, if Minnesota can find a coordinator whose offensive philosophy mirrors the one that brought the best out of the quarterback in the best season of his career, Keenum has the best chance of succeeding with the Vikings.

Bowen: Following Shurmur to New York doesn’t seem logical at this point with two years left on Manning’s contract and the Giants holding the No. 2 overall pick, where they could be in a position to draft USC’s Sam Darnold or UCLA’s Josh Rosen. However, when we look at the clubs in need of a veteran starter at quarterback, such as Denver, Buffalo or Arizona, Keenum could have his pick of landing spots in 2018.

Foxworth: Back under center in Minnesota, but getting back to the playoffs will be much tougher assuming Aaron Rodgers is healthy.

Graziano: It’s possible he could follow Shurmur to New York, but I think it’s more likely the Giants draft a quarterback and maybe even keep Manning for another year. So, if following Shurmur isn’t an option, I think the run the Vikings have made will convince them to bring back Keenum, whether they sign Bridgewater or not, and install him as the starter entering camp and the regular season. After that, I imagine he has to keep playing at this level to keep the job long term.

Seifert: It's possible he'll follow Shurmur, but it now seems more likely than ever that he'll remain with the Vikings.