The Minnesota Vikings followed a theme during this year's draft based on a philosophy that has paid dividends in the past.

Find the best athletes with the biggest upside and highest ceiling for potential. Let the rest (i.e. developing into an NFL player) take care of itself, whenever that should happen. 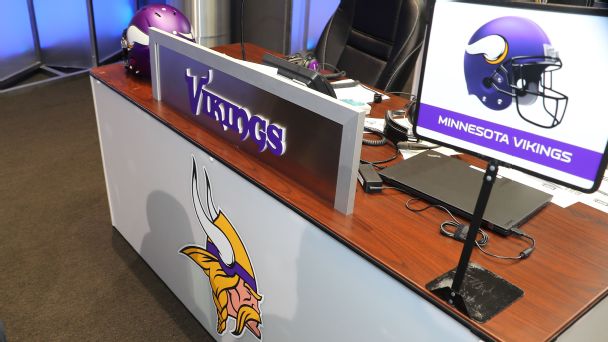 • Analysis for every draft pick »

Sometimes players drafted below a certain spot in the first round are characterized as "raw" or "projects" -- prospects whose development could take several years before they're ready to play at a professional level. If a team doesn't have a pressing need at a position, the benefit of getting these types of players into a system and letting them develop over time could yield success down the road.

For a team like the Vikings, whose stacked roster is among the best in the NFC, drafting these types of players was a top priority.

"When you can get athletes in like that it gives you a chance to hit on some guys that can be pretty special," general manager Rick Spielman said. "And I think when we go that route -- we talk about this all the time in the draft meetings -- this guy may be a better football player today, but this guy has such a higher ceiling. Our coaches are so eager to work with these athletes, and to me, that's when you get an opportunity to make a hit on a guy that can be something, the Danielle Hunters of the world."

Hunter is a prime example of this strategy playing out in Minnesota's favor. The Vikings traded back twice in 2015 to land the pass-rusher in the third round. Projected as a second- to third-round pick, Hunter had only 4.5 sacks over the course of his three-year career at LSU.

Every draft profile was the same, categorizing Hunter as a player with tremendous athletic traits but one who also needed a lot of work. "There is no doubt he's a physical specimen with considerable upside, but he was nowhere near ready to come out of LSU," NFL Network draft analyst Mike Mayock said at the time. "He still has to learn how to play football."

The Vikings rolled the dice on Hunter and won big. In his rookie season, the defensive end contributed immediately and finished the year with six sacks. By his third year in 2017, Hunter was one of the best young pass-rushers in the league.

The Vikings hope some of their current rookies will follow that same trajectory. Even on a team primed for another run at the Super Bowl with veteran talent leading the way, there are noticeable holes that need to be fixed now and could be filled by this crop of rookies.

With Hunter, Minnesota saw the potential in his athleticism and measurables, those that matched up with Jadeveon Clowney, who was the first overall pick in the draft a year before. Its 2018 draft class portrays similar traits: a group of players whose physical and athletic traits are at the top of their class.

At 6-foot-7, 297 pounds, second-round offensive tackle Brian O'Neill clocked a 4.82-second 40-yard dash, which was the fastest of all offensive linemen at the combine. Jalyn Holmes, a fourth-round defensive end who will move inside to tackle, has a near 82-inch wingspan. Fifth-round tight end Tyler Conklin has a 38-inch vertical jump. In the sixth round, Minnesota grabbed a guard who ranked fourth among all offensive linemen in the combine bench press (Colby Gossett). They also found a defensive end whose hand size, 40 time, vertical jump and broad jump all rank above the 93rd percentile (Ade Aruna). And they nabbed a linebacker who was on pace to contend for Pac-12 defensive player of the year before his season was derailed by an injury (Devante Downs).

The projections for how this group will pan out this season are all across the board. O'Neill's length, build and footwork are undeniable, but everyone inside the Vikings organization -- Spielman to O'Neill himself -- has said that he has to get stronger to play right tackle. Meanwhile, Aruna's explosive skill set could make him an early contributor.

"Going deep in the draft here with Aruna, a size/burst specimen at nearly 6-5 and 262 pounds who quietly ran 4.60 at the combine," CBS Sports draft writer Chris Trapasso said. "Mike Zimmer will put Aruna in clearly defined, one-gap spots in sub packages, and the former Tulane standout will be an important role player along the Vikings' defensive line as a rookie."

Even cornerback Mike Hughes, the Vikings' first-round pick, is projected to need time to develop his coverage skills (simply because he doesn't have a ton of playing experience) but is expected to contribute immediately in the return game.

Every player's NFL development will take its respective amount of time. Some rookies may be forced to develop sooner due to positional needs, especially on the offensive line and at nickel corner.

But the common denominator among this group is what could yield a high reward. The Vikings swung big on this crop of rookies, putting more stock in their upside rather than their collegiate stats, current body type or inexperience.

"One of the things we're always looking for is athletes," coach Mike Zimmer said. "Because we can make guys better players but we typically can't make them faster or more talented than what they are that way."

Over the next few weeks, coaches will continue to form their initial impressions of this class. In addition to the group of undrafted players the Vikings brought in with their draft class, Minnesota already liked four tryout players enough to sign them to be part of the offseason program. What happens next is a chance to see where everyone fits, including the ones who may have to make early contributions.