EAGAN, Minn. -- Doug Pederson, Frank Reich and John DeFilippo -- all three former backup quarterbacks themselves -- value having an experienced, reliable QB waiting in the wings for when things go awry. The way the Philadelphia Eagles formed their quarterback room in 2017 reflected that belief. And it paid off for them when Nick Foles, their backup who took over when Carson Wentz went down with an ACL injury, led them through the playoffs and to their first Super Bowl win in franchise history. 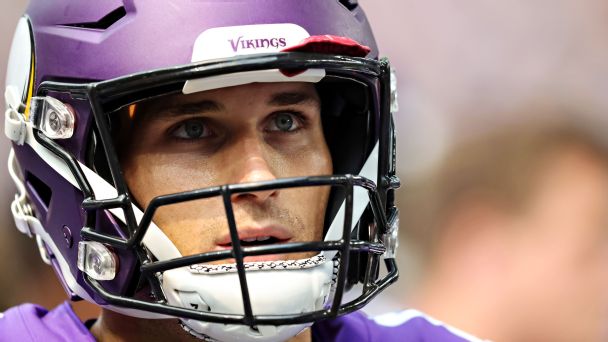 The Eagles made sure they had options, down to their No. 3, by scooping up Nate Sudfeld off waivers. In November, Sudfeld was elevated from the practice squad to the active roster in an attempt to play keep-away after the Colts had their eye on signing the young quarterback.

When the Vikings hired DeFilippo in February as their offensive coordinator, they brought in someone who believed in that quarterback structure. The model Minnesota formed this offseason mirrored what Philadelphia created last season: Kirk Cousins/Wentz as the clear-cut starter, Trevor Siemian/Foles as the experienced backup and Kyle Sloter/Sudfeld filling the role as a developmental prospect with potential.

Only twice in the past decade have the Vikings had a quarterback start all 16 games in a season. Cousins' durability is reflected in 49 straight starts since 2015, and Minnesota hopes it can rely on him to create stability at the position. Behind their $84 million man, the Vikings have confidence in the way they've formed their QB depth chart.

Like the Eagles, the Vikings experienced the benefit of building their room this way -- somewhat by luck and a leap of faith. When Sam Bradford sustained a non-contact knee injury during the 2017 season opener, their hopes rested on Case Keenum, a career journeyman who used his success from last season to cash in on a big payday and a starting role with the Denver Broncos.

Keenum, who went 11-3 as a starter and propelled the Vikings to the NFC Championship Game, reinforced the need to form their quarterback room with more than just serviceable options.

But unlike last season, the Vikings' QB room is set from the get-go. There's no ambiguity about who will be the starter by midseason, like in 2017 when Teddy Bridgewater spent the first half of the year on the PUP list before being activated. There's no question about which role each of the Vikings QBs will fill.

"Obviously, the starter is important, but the backup is a guy you want to be supportive of the starter, help him see things on the sideline," coach Mike Zimmer said. "Also, if he gets hurt, he has to be able to go in there and function. Typically, you keep another guy so that if things go bad during the season, you have a guy who understands your system and you don't have to try to get him ready in a week."

Foles and Siemian have similar makeup as backup quarterbacks. They have experience but are not past-their-prime QBs looking to hang on in the NFL.

They also have considerable practice leading their own quarterback room. Foles started 24 games for the Eagles from 2012 to 2014, earning a Pro Bowl nod in 2013 after finishing the regular season with 27 touchdowns and two interceptions, which topped Tom Brady's 36-4 mark in 2010 for the best touchdown to interception ratio in a single season in NFL history. He also started 11 games in St. Louis in 2015.

Siemian is versed in every spot on the depth chart. He entered the league as a seventh-round pick in 2015 and was the No. 3 QB behind Peyton Manning and Brock Osweiler during the Broncos' Super Bowl season. Manning's retirement the following year and Osweiler leaving in free agency propelled Siemian into the starting role. He went 8-6 in 14 starts, passing for 3,401 yards and 18 touchdowns in 2016.

After an inconsistent 2017, he was traded to Minnesota (and replaced in Denver by Keenum) during free agency one day before Cousins put pen to paper with the Vikings.

"I think his best days are ahead of him," Vikings quarterbacks coach Kevin Stefanski said of Siemian. "He's had success, he won a good amount of football games in Denver, and I still feel like he's a young guy that hasn't reached his potential yet. Not to mention he's a talented player, but he's also a really smart, cerebral player. I've found when that guy's your backup, it's worth its weight in gold for the starter."

Siemian is being asked to embrace life as a true backup for the first time in his career. The benefit for Cousins is not only having a player who can speak from a place of experience with 24 starts, but also being able to rely on someone who prepares to be ready at a moment's notice and embraces the collaborative nature of the job.

It's similar to what DeFilippo witnessed in Philadelphia between Wentz and Foles. Having a backup who accepts his role is key.

"The relationship between the No. 1 quarterback and the No. 2 quarterback has to be really good or you're not going to have a very functional quarterback room," DeFilippo said. "If one guy is trying to overtake the other guy or the starter is not treating the No. 2, they're not collaboratively working to beat the opponent that Sunday, then I think, personally, you're in for some problems. So, the fact that those two guys don't have an ego, they work great together, has been a real asset to not only our quarterback room but our team."

Every day during special teams periods at practice, DeFilippo, Stefanski and all four quarterbacks – Cousins, Siemian, Sloter and Peter Pujals – meet on the sideline away from the rest of the team. The coaches use these informal meetings as teaching time, allowing the QBs to go over the previous period while preparing for the next, correcting their mistakes and clarifying anything coming up on the script they're not sure of.

"It's a time where no question is a dumb question," Sloter said. "Sometimes it's also a goof-off time. Kind of clear your mind of football for 30 seconds and get back to it."

The collaborative effort isn't just limited to the quarterbacks. Stefanski and DeFilippo are in lock-step with each other. Where one is, the other isn't far away.

"He's always in our individual quarterback meetings, he's always talking as if he is a quarterback," Sloter said about DeFilippo. "He's a very hands-on quarterback guy. When we're doing individual stuff, I know he tries to make his rounds to everybody, but you can tell he kind of sticks around the quarterbacks a little bit more because that's really the focal point of the offense. He wants to make sure it starts and ends with the quarterback doing the right thing. That's really his philosophy."

Minnesota benefits from DeFilippo's recent pedigree as a quarterbacks coach, a role he held the previous two seasons in Philadelphia before becoming one of the hottest names on the coaching market in 2018.

All three coaches directing the quarterback – Zimmer, DeFilippo and Stefanski – know it's a team effort to make him successful.

"Flip being a quarterback guy and myself, we're tied at the hip, so the message is always consistent," Stefanski said. "I just think that's a unique position where it never hurts to have your decision-makers having constant communication among each other."

The way the room has been formed in Minnesota, with a defined role for every party involved, was the same way the coaching staff hierarchy was created in Philadelphia. And it's a structure DeFilippo wanted to carry over to Minnesota in his second stint as an offensive coordinator.

"I was adamant in the quarterback room about those guys pushing the tempo," DeFilippo recalled of his days in Philadelphia. "That was a thing Coach Pederson believed in, Coach [Andy] Reich believed in, we all believed in. That was a very unique dynamic between the three of us that's not easily attained. Those two guys obviously played in the league for a while and had a tremendous amount of success both as players and coaches.

"Then you have me. From what people have told me, I'm a pretty good developer of young quarterbacks, and I think my record does show that. There was no ego there at all. Everyone knew their role and accepted their role. The ultimate decision was up to Coach Pederson, and if Frank [Reich] wanted the quarterback taught a certain way, sounds good to me. I'll teach it to him. Maybe I had never thought of it that way. So there was no pushback, and I'm feeling that's what we're going to try and develop here, to be open to new ideas and ways of doing things. I'm very fortunate to have inherited a very experienced coaching staff here."