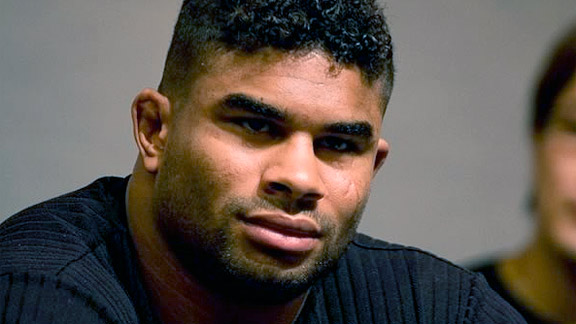 Some advice to unsuspecting bouncers: You won't like Alistair Overeem when he's angry.

It's funny how simple twists of fate -- or in this case, horrific street violence -- can prompt a change of plans: Alistair Overeem's trainer, Bas Boon, told Fighter's Only thatOvereem damaged his hand by beating up five bouncers at a nightclub. The resulting infection forced him to drop out of a planned June 6 Strikeforce title defense. (Andrei Arlovski is his rock-solid replacement.)

Have a question? Want to leave a comment related to this blog? Send your thoughts to jrossen@sherdog.com.

Apparently, Overeem drew the ire of security when he didn't have any Euros to "pay the toilet woman." (In Holland, having a full bladder apparently results in some kind of surcharge.) The argument escalated, and soon Alistair and his brother, Valentijn, found themselves in a spontaneous sparring session.