PORTLAND, Ore. -- Stephen Curry didn't play, missing his fourth consecutive game with a sprained MCL. But there was still an All-Star point guard in the Moda Center on Saturday night.

No, Portland Trail Blazers counterpart Damian Lillard wasn't in Toronto with Curry for this year's All-Star Game because of a Western Conference roster crunch, but the two-time All-Star played at that level during Game 3. Lillard led the way with the highest-scoring game of his playoff career as the Blazers knocked off the Curry-less Golden State Warriors 120-108, pulling within 2-1 in their best-of-seven series.

Behind Lillard's scoring and playmaking, Portland scorched Golden State for a 122.7 offensive rating, the highest the Warriors had allowed all season long. (Golden State was NBA's fourth-best defense on a per-possession basis during the regular season and best in the playoffs entering Saturday's action.)

Based on the way Golden State defended him, Lillard took two different approaches during the game, both of them successful.

In the first half, he defied the Warriors' attempts to corral him off the pick-and-roll. When they allowed too much airspace for the pull-up 3-pointers -- only Curry and James Harden made more this season than Lillard, according to player-tracking data -- he took advantage.

Lillard scored 14 points in the second quarter alone and 25 in the first half, including five 3-pointers, prompting Golden State coach Steve Kerr to change defensive strategy. Corralling Lillard wasn't enough. After halftime, the Warriors began trapping Lillard to take the ball out of his hands.

From the opening play of the third quarter, Lillard recognized the difference in the Warriors' defense. Instead of forcing things, he found his teammates and set up open shots. Lillard scored just five points in the period but handed out seven assists as the Blazers outscored Golden State 35-34.

"They decided to lock down on me, and I just made the right plays," Lillard said. "Guys stepped up and made shots."

Nobody stepped up more than forward Al-Farouq Aminu, who almost couldn't miss. Aminu made eight of his nine shot attempts, including four 3-pointers -- two of them coming off Lillard assists.

"He made two or three plays when they converged on him and kicked it out for a shot," Portland head coach Terry Stotts said. "Those are plays that we need him to make, as well, in addition to his scoring. Him and C.J. [McCollum]. Chief [Aminu] gets his 3s because of their penetration."

By the fourth quarter, with the Blazers trying to avoid letting a lead slip away down the stretch as they had in Game 2 at Oakland, Lillard turned scorer again. He had 10 points in the period, including back-to-back 3-pointers that pushed Portland's lead to 15 with 2:17 to go and extinguished any hope of a Golden State comeback.

Lillard's performance wasn't the only difference between Saturday's Game 3 and the first two games of the series -- both Warriors wins at home. After Portland fell behind early, surrendering 18 first-quarter points to Klay Thompson, Stotts made a couple of changes to his rotation.

Out went starting small forward Maurice Harkless, who struggled with hip pain. He was replaced by the better-shooting Allen Crabbe and Gerald Henderson. The Blazers outscored Golden State by 25 points in Crabbe's 30 minutes of action. Foul trouble also forced Stotts to use Ed Davis more in place of starting center Mason Plumlee, and Davis responded with eight points and 10 boards in 30 minutes. 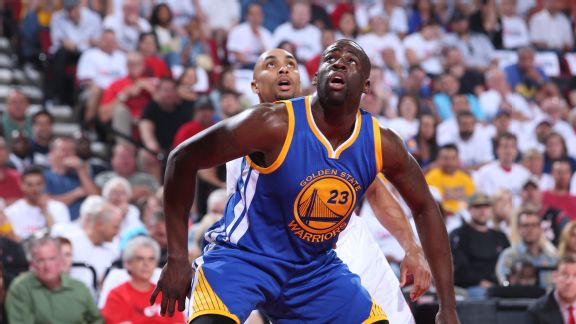 The Portland Trail Blazers got back into the series with a 120-108 win over the Golden State Warriors in Game 3 of the Western Conference semifinals.
Box score »
Game highlights »
Fan reaction »
Game HQ »
Arnovitz: Warriors lose on the margins »

However, the most important change might have been bringing Lillard back after a shorter-than-usual rest in the first half, at his suggestion. Having played the entire first quarter, Lillard returned 92 seconds into the second, teaming with fellow starter McCollum against a Warriors team with both Thompson and Draymond Green on the bench.

By the time Kerr could take timeout and get Green back into the game, Portland had turned a six-point deficit at the end of the first quarter into a one-point lead and Lillard was on his way to a monster period.

"Our season was on the line," Lillard explained. "After the first quarter, I went into our coaches' huddle and I said, 'Put me back in earlier than I usually go back in.' A minute and a half into the second, he was calling my name."

After Stotts called Lillard's name, the Moda Center PA announcer couldn't stop calling it, whether it was for buckets or assists. The performance was one of the best in Blazers playoff history. Lillard became the first Portland player with a 40-10 game in the postseason since Clyde Drexler in the 1992 playoffs.

It was undeniably an All-Star performance, as Kerr confirmed postgame. Asked during his news conference whether Lillard had played like an All-Star, Kerr looked down at the box score he was holding in theatrical fashion.