MIAMI -- Toronto Raptors guard DeMar DeRozan lost the ball at the end of Game 1 of Round 2.

In the ensuing scramble for it with Miami Heat guard Dwyane Wade, he lost his ability to shoot.

DeRozan injured his right thumb on the play -- it bent awkwardly as the two fought for possession on the floor -- and he had been bothered by it ever since.

And in Game 4 on Monday night, he air-balled his first jumper, hit two of his final 14 shots and sat from the 3:09 mark of the third quarter until the 1:38 mark of the fourth quarter.

With DeRozan struggling and Kyle Lowry fouling out late in regulation, the Raptors imploded, blowing a nine-point fourth-quarter lead before succumbing to the Heat in overtime 94-87 on Monday night at American Airlines Arena.

“I mean, it’s the feeling of being uncomfortable and not doing the things that you normally do with gripping the ball and everything,” said DeRozan, who finished with nine points on 4-for-17 shooting and went 1-for-4 from the free throw line. “It’s nothing I’ll ever make an excuse about, but like I said, I know for sure I’m not going to shoot like I did tonight [in our] next game. I know that for a fact. It’s just something I’m going to have to deal with and push through.”

DeRozan has been wrapping his hand in ice after games and wearing a blue compression glove over it.

It doesn’t seem to have helped.

“It is a concern,” Raptors coach Dwane Casey said. “He has been getting treatment on it. He is a tough kid. He is trying to play through it. We will look at the substitution pattern to try to relieve him a little bit more. We left him out as long as we could.”

In Game 4, DeRozan went 2-for-10 in the paint, 3-for-12 on contested shots and 4-for-16 when trying to create his own offense, according to ESPN Stats & Information data. Too often he was guilty of forcing things to get himself going.

“You can’t let frustration get to you at all,” said DeRozan, who underwent X-rays after Game 1, which were negative. “You can’t listen to what the outsiders have to say. You just can’t get caught up in that. You just have to stay positive. Like I said, [the series is] 2-2 and we have a great opportunity to go home and do what we know we can do. In the next two days, hopefully it will feel better then.”

With center Jonas Valanciunas lost for the rest of the series due to a sprained right ankle, the Raptors simply can’t afford for DeRozan and Lowry (right elbow) to struggle shooting the ball as they have been. But both players are banged up, and the results haven’t been pretty.

Lowry followed up a 33-point Game 3 by shooting 2-for-11 in Game 4, although as usual, he made it happen in other ways -- dishing out nine assists to go along with seven rebounds and four steals.

Toronto’s role players carried the team in an ugly affair, with Terrence Ross and Cory Joseph producing 14-point games off the bench. Bismack Biyombo added 13 points and 13 rebounds. And DeMarre Carroll had 10 of his 13 points in the third quarter, as the Raptors outscored the Heat 27-16 to turn a nine-point deficit into a two-point lead heading into the fourth.

It was 77-68 Raptors with 6:40 left. From there, Toronto shot 3-for-14 over the rest of the fourth period and was outscored 15-6 by Miami. Lowry was disqualified when he committed an offensive foul with 1:58 remaining.

The Raptors’ final two possessions of regulation -- which would usually go to Lowry or DeRozan -- went to Joseph, who missed two contested jumpers.

Lacking any scoring punch, Toronto was outscored 11-4 by the Heat in OT. 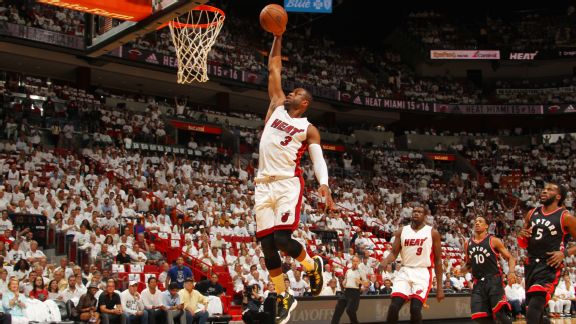 Wade outscored the Lowry-DeRozan combo 30-19. Lowry and DeRozan's six combined field goals proved to be their fewest this postseason (21.4 percent). And according to ESPN Stats & Information research, their combined 33.1 percent shooting this postseason is the worst by any starting backcourt in the past two decades (minimum 150 attempts).

“Personally, I'm pissed,” Lowry said. “I think we wanted to come down here and get two, and we had the opportunity. I can't be in foul trouble; I think I let my team down tonight. I take the loss for us, because me not being out there on the floor hurt our team.”

Nevertheless, the Raptors continue to be in every game in this series. Three of the first four have gone to overtime.

There is still time to win this series. It's just going to be tough.