TORONTO -- Twelve days ago, Kyle Lowry was a humbled two-time All-Star, working late into the night to try to fix his broken jump shot.

But on Sunday afternoon, with everything on the line, the Toronto Raptors point guard was the best player on the court.

And when he exited for the final time, with the franchise's first trip to the Eastern Conference finals already secured, Lowry received a standing ovation from the capacity crowd at Air Canada Centre.

"Hard work pays off," Lowry told ESPN.com after posting a 35-point, 9-assist, 7-rebound, 4-steal performance for the ages in Toronto's 116-89 blowout victory over the Miami Heat in Game 7 of their second-round series.

"It's the dedication that I've put into this game of basketball for myself and for this organization. I just wanted to make sure I could be the best player I could be, at all times -- especially on the biggest stage." 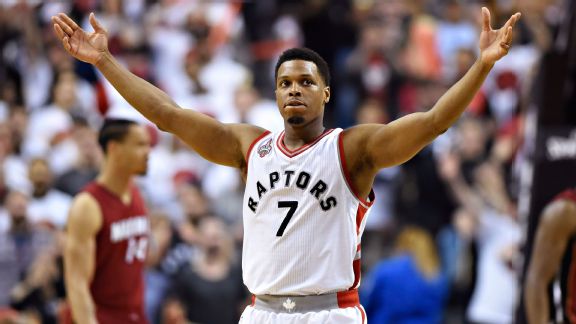 Next up: LeBron James, who hasn't missed the NBA finals since "The Decision," and the heavily favored Cleveland Cavaliers.

"It hasn't hit me yet," Lowry said of making it this far. "It's too early to even think about it. But to be honest I'll sit back and relax and talk to DeMar [DeRozan] about it because it's funny to think about where we were four years ago to where we are now. It's pretty cool.

"Everybody's probably a little bit more excited than I am, though, because I want more. I'm at that point where I just really want to keep playing and growing. I'm confident in our team and what we can do. I'm more confident in that than anything."

After a seven-point performance in Game 1 against the Heat that prompted him to put on a hoodie and shoot until 1:15 a.m. ET, Lowry's playoff averages stood at 13 points on 30.6 percent shooting -- the worst percentage for any player in 50 years. He admitted he wasn't himself mentally, and physically he had been bothered by a sore right elbow since late March.

From there, everything changed. Lowry had 29 of his 33 points in the second half of Game 3, and then went for 25 in Game 5 followed by a postseason career-high 36 in Game 6.

Still, his impact was always felt. He currently holds a plus-77 postseason plus-minus rating. As a team, the Raptors are plus-eight for the playoffs.

"I just wanted to stay poised and level-headed no matter what happened," said Lowry, who was nearly traded to the New York Knicks in December 2013. "We knew it was going to be a 48-minute game and they weren't going to give up easily and they were going to make a run. We just had to stay focused on the task at hand and get back on defense. Their coaches did an unbelievable job in going small, but we had to be big and just play our game."

After back-to-back first-round exits, the Raptors won a franchise-record 56 games and advanced to Round 2 for the first time in nearly 15 years despite being pushed to Game 7 by the Indiana Pacers.

Now, they've bested Dwyane Wade and the Heat as well.

It certainly has been a bumpy ride to get to this point. Just ask embattled coach Dwane Casey, GM Masai Ujiri, Lowry or DeRozan.

The scrutiny has come with the ups and downs, but somehow the Raptors have been able to go where they've never gone before.

Even better: For once, they made it easy on themselves, outscoring the Heat 30-11 in the fourth quarter and leading by as many as 28. The key stat was the rebounding column, which Toronto dominated by a margin of 20.

"It's very important for our program," Casey said. "I think we've done everything we've set out to do, but we're not done yet. I know what it's like to win a championship. I'm not saying we can do that, but I think this group is hungry and never say never. I know one thing: Our guys will compete."

Lowry and DeRozan (28 points) closed the series by scoring 59 points combined in Game 5, 59 in Game 6 and a career postseason-high 63 in Game 7.

Bismack Biyombo had 17 points and 16 rebounds in Game 7, Patrick Patterson finished with 11 points and 11 rebounds, and DeMarre Carroll was outscored by Wade only 16-14, meaning he harassed the future Hall of Famer defensively all game long.

"We never doubted Kyle and DeMar," Casey said. "They're our guys. They're here, they're our All-Stars and I thought they played like it tonight. They both stepped up and carried us."

There is a lot of uncertainty surrounding whether Jonas Valanciunas (right ankle sprain) will be ready for the start of Round 3, as he has not resumed basketball activities since two days before Game 1 against Cleveland. At this point, it doesn't look promising.

The Cavaliers hit 77 3-pointers during their four-game sweep of the Atlanta Hawks, and will be a tough opponent for the Raptors, who usually put more emphasis on defending the paint than the perimeter.

"It's been unbelievable," Lowry, who averaged 31 points on 66 percent shooting and posted a 46.2 PER against Cleveland in the regular season, said of what the Cavaliers have been able to accomplish.

"We've all watched it and we've witnessed all the things they've done, like hitting 25 3s in a game and 70-something 3s in the series, but that's why we have books and film and we'll have time to scout it and make adjustments."

Nevertheless, Toronto's season already has been a resounding success, and the Raptors are playing with house money now.

Just don't tell them they're the "underdogs."

"We look at ourselves as a team that's going to continue to play hard and grow and go from there and let the chips fall where they may," Lowry said.

"It's been a crazy ride. DeMar's been here for the long run, and I'm more happy for him and these guys that have been with this franchise for 21 years to finally get to this point. Our owners, [senior basketball advisor] Wayne Embry -- for me I'm happy for the other people that we've done it for."