CLEVELAND -- Tuesday night started out well for the Toronto Raptors.

Masai Ujiri's first transaction after taking over as the team's general manager in May 2013, somehow moving bust Andrea Bargnani to the New York Knicks for a 2016 first-rounder, yielded the No. 9 overall pick in the upcoming NBA draft.

And then, playing in their first Eastern Conference finals game in franchise history, the underdog Raptors jumped to a 7-0 lead over the heavily favored Cleveland Cavaliers.

But that's where the fun ended.

LeBron James and Kyrie Irving were unstoppable getting to the rim, and the Raptors missed a bunch of 3-pointers and got trounced by the Cavs 115-84 in Game 1 at raucous Quicken Loans Arena. It was the largest margin of victory for Cleveland in a playoff game, as Toronto dropped to an NBA-worst 1-10 in postseason Game 1s.

“I thought they were the fresher team, the quicker team tonight. That’s to their credit, but it’s one game. This series is not over by any means. We have another game [Thursday] night,” said Raptors coach Dwane Casey, whose team played in back-to-back seven-game series over the past month. “Again, the score is embarrassing, but it’s just one game.”

So much for Cleveland being rusty and Toronto hoping to steal one.

So much for Cleveland draining a bunch of 3s like usual. It didn't need to.

James and Irving sat out the fourth quarter after combining to score 51 points on 22-for-30 shooting over the first three, doing much of their damage from the painted area off straight-line drives.

“Those are very, very demoralizing,” Casey said. “Again, you want to take away one thing [the 3-point shooting], but you don't want to open up a whole can of worms to give them layups, and that's what we've got to be disciplined with and understand where the help is coming from, the angles of your close-outs, the angles of your foot position, your stance on the basketball.

“Again, like I said, you take away the 3, but if you're not careful, you're giving up layups, and that's where we got to get that balance, and I think that's the key for this whole series. It’s a different series than last series. We've got to get our minds adjusted and bodies adjusted. The speed of the game is another issue, a quicker pace, a quicker foot speed for this team versus Miami and Indiana, so we've got to make that adjustment.”

Maybe the Raptors could get away with that earlier in these playoffs.

Not with Jonas Valanciunas out with a right ankle sprain and his status for the rest of the series uncertain beyond being doubtful to play in Game 2 on Thursday night.

Kyle Lowry, coming off back-to-back games in which he scored 36 and 35 points, had only eight points Tuesday night on 4-for-14 shooting, including 0-for-7 from beyond the arc. He and DeMar DeRozan (18 points), who hit his first five shots and had 12 points in the first quarter, both did not get to the free throw line for the first time in 269 career games together (including playoffs), according to ESPN Stats & Information.

“Just being more aggressive,” DeRozan said. “We’ve got to come out of the gate with that mindset, being aggressive like we usually do, and I think we didn’t try to do that until later in the game.” 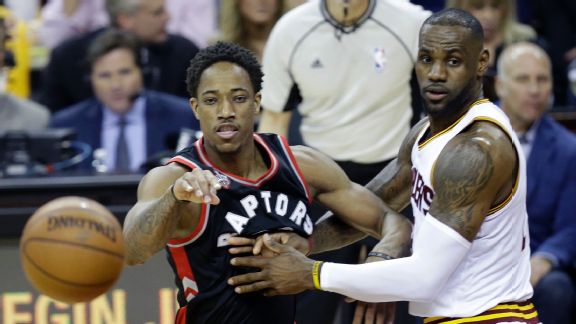 Toronto got off to a hot start, but that was as good as it got for the Raptors as the Cleveland Cavaliers dominated the rest of Game 1, 115-84.
Box score »
Game highlights »
Fan reaction »
Game HQ »

James' baseline drive and slam and Irving's behind-the-back dribble turned layup should serve SportsCenter's Top 10 plays well. Like Lowry said, James is one of the best to ever do it, and he dominated feisty defender DeMarre Carroll with ease.

“He did what he had to do tonight, and he willed his team to a victory,” said Carroll (two points), who has given James problems in the past. “You go back to drawing board and see what you can do to slow him down.”

The Cavaliers shot 55.4 percent overall, 19-for-25 on uncontested attempts, and pulled away with a 15-0 run bridging the end of the first and beginning of the second quarter, with nine of those points coming with Lowry off the floor. They have won 16 straight East postseason games, and James improved to 39-0 in the playoffs when leading by 20 or more points at some point, according to ESPN Stats & Information.

The Raptors have already done well getting this far. And that lottery pick should help them continue to get better.

It's hard to have perspective, though, after taking a shellacking like Tuesday's, when it feels like the Cavaliers are in a different class, and a four-game sweep could be the result.

“It’s the first to four, and it’s one game. It doesn’t matter if you lose by two or you lose by 30. It’s only one game,” Carroll said.