TORONTO -- Toronto Raptors point guard Kyle Lowry came into his news conference on the morning of Game 6 of the Eastern Conference finals with a hood covering his face.

The Raptors may have their backs against the wall again, but in a Jekyll and Hyde playoff run that began April 16, they're still having fun and enjoying themselves along the way.

"When you know the moment is really there, you understand that you have to do whatever you can to live to fight another day, and that's what we have to do tonight." DeMar DeRozan ahead of Game 6 of the Eastern finals in Toronto

The Raptors are looking to become the first team since the 1988 Los Angeles Lakers to play in three consecutive playoff series that go to a Game 7.

History suggests that won't happen. According to the Elias Sports Bureau, the Cavaliers have won the last six games in which they have had a chance to clinch a postseason series on the road.

But the Raptors don't worry about the past. They've made plenty of history in 2015-16, reaching this stage for the first time as a franchise.

Toronto coach Dwane Casey has learned this much about his players through what will become a 20-game playoff sample size Friday night: They don't quit.

"It's one of those things where when teams have counted us out, we've bounced back," Casey said. "Everyone counted out Kyle, everybody counted out DeMar [DeRozan] numerous times throughout three different series, and they've always bounced back.

"In the next couple years after this is over with, our team will be able to build from this. This is a great step. Nobody expected us to go through this run this season, and we'll be able to learn from it and draw from it going forward."

It feels like LeBron James has been the only consistent player throughout the series, averaging 24.6 points, 8.0 rebounds and 6.8 assists while shooting 63.2 percent from the field. Everyone else has been up at home and down on the road. Lowry, for example, is shooting 63.6 percent at home and 32.5 percent on the road.

If the Raptors are going to avoid being ousted, Lowry and DeRozan will need to have big nights -- even if that means Toronto's starting swingman takes upward of 30 shots for the third straight potential elimination game.

Center Jonas Valanciunas had nine points in 18 minutes in his return from a sprained right ankle in Game 5, and Casey would not rule out starting him in Game 6. If the Raptors are going to go down, it sure would be nice to do so with their regular rotation intact, although Bismack Biyombo has played better at home as a starter, feeding off the energy from the passionate fans at Air Canada Centre. 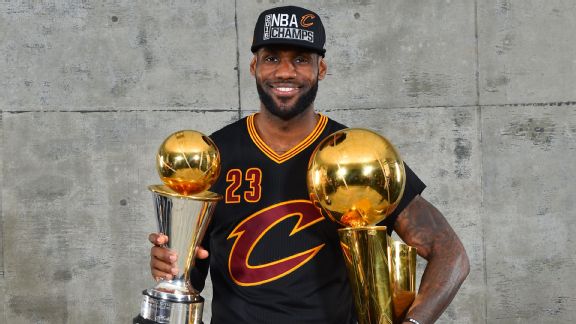 Cleveland made history, rallying from a 3-1 deficit to stun Golden State in Game 7. Relive the action from the first round to The Finals.
2016 Playoffs »

Three seasons ago, Toronto got off to a bad start that prompted general manager Masai Ujiri to trade Rudy Gay and nearly deal Lowry.

That's when the upswing for this previously woebegone franchise began.

"After we made the trade, anything could've happened," DeRozan said. "We could've had excuses, but the guys that came in [Patrick Patterson, Greivis Vasquez and John Salmons] and everyone else just buckled down and we did something that wasn't expected. We went to the playoffs, and ever since then we've always had this thing about us being resilient, never making excuses, never complaining, just trying to go out there and get it done."

In the first two rounds, the Raptors went up 3-2 and tried to have a Game 7 mentality in Game 6.

But the tables have turned, and it has to work this time -- otherwise the greatest season in franchise history comes to an end.

"There's no tricking us now. No smoke and mirrors now," DeRozan said. "When you know the moment is really there, you understand that you have to do whatever you can to live to fight another day, and that's what we have to do tonight."