TORONTO -- Before leaving the court for the final time in what was the greatest season in Toronto Raptors' history, and with his team about to be eliminated from the playoffs, Kyle Lowry embraced LeBron James.

"He's a bad motherf'er," Lowry said of James after leaving it all on the court, scoring 35 points in Toronto's 113-87 loss to the Cleveland Cavaliers in Game 6 of the Eastern Conference finals Friday night at Air Canada Centre.

"And I said to LeBron, 'You a bad motherf'er,' and I told him to go win it all. I've always had mutual respect for LeBron. We have a good relationship, and like I said I just appreciate all the effort and hard work he puts in and just that competitive nature of two competitive athletes going at it. I'm happy for him because he gets another opportunity [in the NBA finals], but I'm disappointed that we're not having that opportunity."

After reaching the third round for the first time, the Raptors finally ran into James, who has now reached the NBA finals in six consecutive seasons. For the series, the Cavaliers' superstar forward averaged 24.6 points, 8.6 rebounds and 7.0 assists while shooting 54.6 percent from the field.

"That's what he does," Lowry said. "He's LeBron James, a top-five player in the history of the NBA once he retires."

Perspective is hard to come by immediately following a team's ouster, but given where the Raptors were four seasons ago, it's pretty remarkable what they were able to accomplish in 2015-16.

"It's hard work, man. You put in everything you have, you sacrifice so much for moments like this," Toronto swingman DeMar DeRozan said. "When they get taken away from you, it's hurtful. You work so hard to climb your way up, to get knocked back down you understand you've got to start over again from ground zero. But that's the challenge we all accept, and we're looking forward to it. But as of right now, it sucks."

The Raptors might not have won anyway, but they would've had a better chance had they had the services of 7-footer Jonas Valanciunas for more than 35 minutes in the series. It would've helped if $60 million 3-and-D man DeMarre Carroll wasn't so banged up, and Carroll (knee, ankle, wrist, elbow) said he's going to use the summer to get healthy.

Still, in spite of all the challenges they faced, the Raptors fared quite well.

"I really think we're a step ahead of the process," Toronto coach Dwane Casey said. "The next step is probably the biggest step we have to take as individuals. Now the target is on your back. It's going to be even more so when people talk about the Toronto Raptors. We're one of four teams left. We should be proud, but not satisfied."

James was complimentary of Lowry and DeRozan during his postgame news conference. 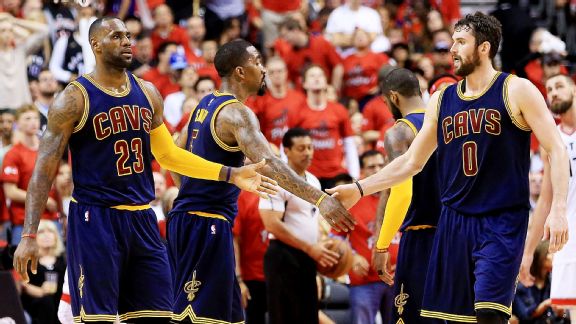 "What those two guys have done for this franchise and this city and this fan base is nothing short of amazing," James said. "Being two All-Stars and carrying this team through a first-round, seven-game series and a second-round series and then a conference finals Game 6 in their home building, they were spectacular. They were great. These fans here, I know they know what they have, and they sure appreciate talent like DeMar and Kyle, so it was fun competing against them."

The Raptors figure to face a busy offseason.

ESPN.com's Marc Stein reported Saturday morning that the team is set to begin talks with Casey on a contract extension, and unsung playoff hero Bismack Biyombo is going to opt out of his contract and become an unrestricted free agent. With the salary-cap spike, the 23-year-old center could command $15 million, and it's going to be tough for Toronto to meet that number even as Biyombo says he wants to stay. And DeRozan is going to be getting max money himself -- whether it's from the Raptors, his hometown Los Angeles Lakers or someone else.

As for Lowry, well, he's a fierce competitor, and was understandably miserable postgame. But once he looks back and reflects on everything in due time, he'll probably be able to smile.

"I'm a team player," he said. "I don't care about my individual performance. I just wanted us to win as a team and lose as a team and it doesn't matter what I did individual. We lost. It sucks. It's hard to kind of put everything in perspective right now. I need some time to really think about it, but right now I can't put it into words. I'm just so disappointed in what happened."