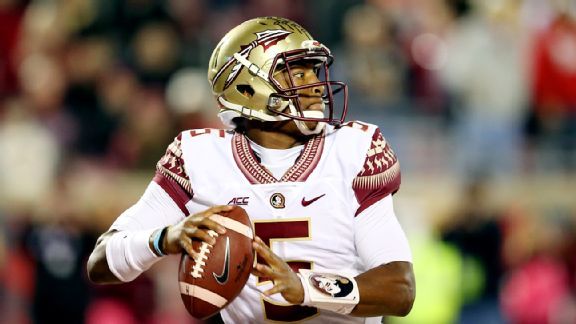 Jameis Winston displayed his come-from-behind ability in a victory at Louisville on Thursday.Florida State is not dominating teams as it did last season. The Seminoles are undefeated but have trailed at halftime in four of eight games, and their average win probability at halftime (58%) ranks 50th in FBS.

But the 2014 Seminoles don’t have to compete with the 2013 Seminoles to make the first College Football Playoff. They only have to be judged one of the four best teams by the selection committee. And regardless of their diminished dominance compared with last season, they have something no other team has: the reigning Heisman Trophy winner.

This season, the Seminoles have run almost twice as many plays while trailing (184) than they did all of last season (93). More than half of those plays (55) from last season were in the BCS Championship game against Auburn.

Winston When Trailing This Season

Here’s where Jameis Winston comes in. He is 21-0 as a starter. His career Total QBR (86.8) is the fourth-best mark for a player with at least 10 starts in the QBR era (since 2004) behind Cam Newton, Marcus Mariota and Johnny Manziel.

Winston has played his best when his team has needed him the most. He has led four second-half comebacks in his career, including a game-winning drive in the BCS Championship game.

In the Seminoles’ 42-31 win last week at Louisville, Winston helped rally his team from a 17-point deficit with 11:22 left in the third quarter. From that point on, he completed 15-of-25 passes for 278 yards and three touchdowns. He did this against a team that entered the game allowing the lowest Total QBR in the nation and that had given up a total of three passing touchdowns in the previous six games.

In the postgame news conference, Winston said, “Being down is nothing when you’ve got heart and you persevere. Personally, we play better when we’re down, honestly.”

Numbers back him up

He has been better when trailing in the second half. In that situation, he leads the FBS in yards per attempt (10.5) and third-down conversion percentage (75%) and ranks fourth in Total QBR (90.3).

His best performance might have come against Notre Dame on Oct. 18. He completed 15-of-16 second-half passes (all when trailing), including all eight of his passes thrown 10 yards or longer.

Winston on 3rd Down This Season

Third-down efficiency has separated Winston from the pack. He has converted a first down on 54% of his third-down passing plays in his career, on pace to be the best for any FBS quarterback in the last 10 seasons (min. 10 games started).

There is a first half/second-half divide with his third downs, too. Look no further than last week against Louisville, when Winston completed 2-of-5 third-down passes in the first half for 19 yards and an interception. In the second half he was 5-of-6 for 169 yards and three touchdowns.>Not surprisingly, Winston leads the FBS in third-down Total QBR in the second half.

The Seminoles might not be winning every week by 40 points like last season, but they are 8-0. According to ESPN’s Football Power Index, the Seminoles have a 34% chance of winning the rest of their games, including the ACC Championship game. An undefeated Power 5 team that is the reigning national champion and has a Heisman Trophy winner at quarterback sounds a lot like a playoff team.