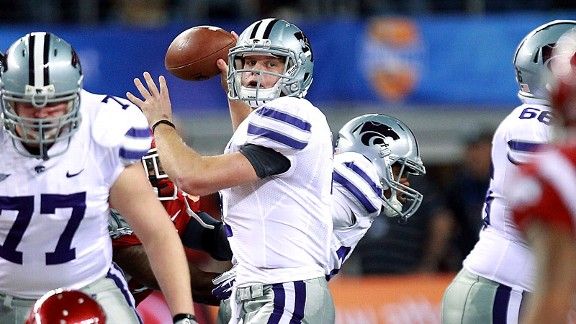 History shows that Collin Klein and teammates will have a hard time replicating 2011.

Kansas State won eight games decided by seven points or fewer last season, the most of any team since the start of 2004.

Overall the Wildcats went 8-1 in games decided by that margin, which included a goal-line stand at Miami, a four-overtime victory versus Texas A&M and a nine-point fourth quarter comeback versus Baylor.

Kansas State outperformed expectations last season, but according to recent history and statistics, the Wildcats also won more games than they “should” have won based upon how many points they scored and allowed.

That may not bode well for next year.

Based off of Bill James’ Pythagorean Theorem for baseball, ESPN Stats & Information Analytics Specialist Alok Pattani calculated the expected win percentage (or Pythagorean Win Pct) for every FBS team since 2004.

The Pythagorean Win Percentage formula calculates an expected win total based upon the number of points that a team scores and allows in a season.

So what does that mean for Kansas State?

Last season’s results indicate that the Wildcats “should” have gone 7-6 or 8-5 instead of 10-3. They won approximately 2.6 more games than expected. That was the largest differential between wins and expected wins of any team in FBS last season and the sixth-largest differential since 2004.

That is not to say that the Wildcats should not have won 10 games. Whether it was luck or skill, the Wildcats performed when the game was on the line. However, recent history suggests that it's unlikely for a team to outperform its Pythagorean Win Percentage two years in a row.

Most Wins Above Expected Wins
Single Season Since 2004

Of the 63 teams that won at least 1.5 more games than expected since 2004, only four teams outperformed their expected wins by 1.5 games again the next season.

These teams averaged 0.025 fewer wins than expected the next year, meaning that they basically performed as their point differential predicted.

Further, many of the top outperforming teams saw a drastic decrease in win percentage the next season. There is always significant turnover in college football, but the chart on the right shows that the teams that outperformed expectations mostly faltered the following season.

This does not mean that Kansas State is doomed. The Wildcats return one of the strongest quarterbacks in the nation in Collin Klein who is nearly unstoppable around the goal-line. If Klein can improve his pocket passing (he completed 59 percent of his passes inside of the pocket last season) the Wildcats may be able to repeat their success.

Yet, history suggests it is unlikely for Kansas State to win 10 games again next year without increasing its score differential. Because of last season's success in close games, don't be surprised if the Wildcats win fewer games despite being a better team than a year ago.