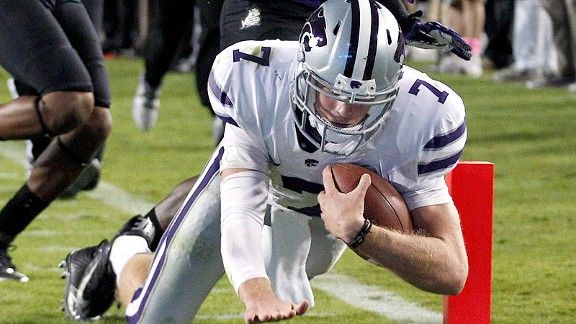 Collin Klein's efficiency is one reason Kansas State is No. 1 in the BCS.

Statistically speaking, who are the Kansas State Wildcats? They are a team built on efficiency, attention to detail and a Heisman-worthy quarterback:

1: Collin Klein has accounted for 65.7 percent of Kansas State’s offensive yardage this season and 66 percent (31 of 47) of its offensive touchdowns.

2: Kansas State scores on 53 percent of its possessions, the best rate in FBS. The Wildcats score once every 1.8 offensive drives.

3: The Wildcats have a plus-20 turnover margin, tied for the best turnover margin in the country with Kent State. Kansas State has turned the ball over six times and allowed the fewest points off turnovers (7) in FBS.

4: Kansas State is committing 3.2 penalties per game, fewest in the nation.

5: The Wildcats’ average drive starts on its own 41, the best average starting field position in FBS by 4 yards.

6: On the flip side, Kansas State’s opponents’ average drive starts on its own 27. The plus-14 field position differential is the best in the country, 5 yards better than any other team.

7: One reason for Kansas State’s stellar field position is its special teams. The Wildcats rank in the top three in FBS in yards per kick return (29.0) and yards per punt return (23.8).

8: Since the start of last season, Collin Klein has an FBS-best 34 touchdowns on 68 runs in goal-to-go situations, with at least one touchdown in 21 of his 23 games.

10: Kansas State faces Baylor on Saturday. Baylor is ranked second in passing offense and some have questioned whether the Wildcats can stop its passing attack.

Kansas State has faced four teams currently ranked in the top 15 in passing offense. These teams averaged more than 300 passing yards per game against Kansas State, but combined for just six passing touchdowns and nine interceptions.