1. As previously detailed by ESPN.com senior writer Ian O’Connor, Patriots quarterback Tom Brady and Baltimore Ravens coach John Harbaugh shared a private plane on Feb. 3 while returning from Jim Harbaugh’s Michigan’s national signing day event. That plane ride is timely to revisit with the Patriots hosting the Ravens on Monday night, and it's timely given Brady’s “study the rulebook” comments following a divisional-round playoff victory two seasons ago, remarks that led Harbaugh to acknowledge to O'Connor that he was “pissed off.”

As he returned to his locker following practice Saturday, I asked Brady about the plane ride, which included Harbaugh’s daughter Alison, a budding lacrosse star.

“We had a nice time. It was nice to get to talk to him,” Brady said, acknowledging that he's never had that experience with an opposing coach before. “We flew home from Ann Arbor, dropped here. I had never really been around him. He’s a real professional. You could tell how much his job means to him. I enjoyed getting to know him a little bit, getting to know his daughter. It was nice.”

Asked if the two had talked at all about their history, past matchups or any other issues between them, Brady laughed.

“No,” he said, smiling. “We weren’t going to give away anything. But it was friendly.”

A few days earlier, Harbaugh had shared his thoughts on the plane ride with Patriots reporters.

“We just had a chance to talk for a couple hours and really more than anything, Alison got a chance to listen to Tom Brady talk about competing, and what it takes to be great at what you do,” he relayed. “He gets off, they go, and we get back on the plane and we’re talking, and she says something like, ‘Boy, Tom really is a nice guy.’ And I look at her and go, ‘Tom?’ I’m thinking Mr. Brady would have been more appropriate. And she says, ‘He said to call me Tom.’ I got a kick out of that.

2. Some within the Patriots organization were amused this week at how much talk they heard from the Ravens about how Baltimore wasn’t scared of playing New England. Walking out of the team’s locker room on Saturday after a fourth straight day of media access, it almost felt like some players were using it as a form of motivation. There seems to be widespread respect for the Ravens at One Patriot Place, but at the same time, some seemed to think the team’s 9-3 all-time series lead was being conveniently left out of the discussion by some Baltimore players.

3. If a team was considering trading for Patriots quarterback Jimmy Garoppolo in the offseason, the move would be endorsed by ESPN Monday Night Football analyst Jon Gruden, whose annual QB Camp with draft prospects provides him a solid background of NFL talent at the position.

“There are a lot of teams that I’m sure have him at the top of the food chain of their wish list,” Gruden said Saturday at Gillette Stadium after sharing an inspirational message with local high school players and coaches. “He can answer a lot of problems if you need a quarterback. But he’s under contract, so I’d hate to speculate right now.”

Before saying that, Gruden had noted, “[Garoppolo] played for Dino Babers at Eastern Illinois in a no-huddle, up-tempo offense and you like his athletic ability, his passing ability, but he had never been in a huddle, didn’t really look at the defense and have to recognize anything. But being here, with this organization, and watching Tom [Brady], and being with Josh McDaniels every day for the last few years, you saw the dividends when he did play. His audibles, his arm talent, his athleticism was all showcased in those two wins. I think he has a great future.”

4. Five football nuggets from an enjoyable afternoon with Gruden:

A difference that stands out to him with the Patriots. “I think getting [offensive line coach] Dante Scarnecchia back has been huge.”

What he sees from Tom Brady. “Brady is wired differently than just about any other human being you’ll ever meet. He’s maniacal on and off the field. His diet, his stretching, his flexibility. He’s moving around so much better than I’ve seen him move. He can establish new launching spots in the pocket. He’s quick. He’s been scrambling for yards. I’ve always said that, ‘You either get better or worse.’ I don’t give a damn how old he is; he’s getting better. He looks good to me.”

Matchup that stands out Monday night. “This is going to be as good a matchup between a defensive system like the Ravens against the best quarterback that I think has ever played. The Ravens excel in the red zone, they’re great on third down, they create turnovers, they have a lot of looks that give people problems. They have multiple rushers, talented people that can ruin the game. The Ravens are hot right now. I think they are quietly as good as anyone in football.”

Brady over Joe Montana as best of all-time? “Look, I was with Joe. My dad was at Notre Dame with Joe. I was in San Francisco. I’m not going to get into all that fantasy stuff. But I don’t know many guys in my lifetime that are 39 years old and have 19 touchdown passes and one interception. It’s pretty insane, if you ask me. The guy looks like he’s 25 years old. I don’t know; I’m going to go to TB12 [Sports Therapy Center] and check into that facility!”

Best player he’s ever coached. “I’d probably say Jerry Rice. He was 40 years old and he ran routes in practice like he was 23, 24. If you watched Jerry Rice practice, if you threw him a pass, he would practice making long runs. If we didn’t put a fence around the field, Jerry would run out in the street and get hit by a car! He practiced harder than any guy I’ve ever seen.”

5. While the potential return of receiver Keshawn Martin seemed to make a lot of sense for the Patriots -- he has knowledge of the system and punt-return experience -- the team instead signed Griff Whalen on Thursday. I later learned that Martin wasn’t an option for the team because of a grievance situation, as he had sustained a leg/foot injury in the preseason finale and was released Sept. 4. So the sides weren’t going to come together again. Whalen, meanwhile, had gone through one workout since being released by the Chargers on Nov. 22, and it was with the Jets.

6a. Arguably the NFL’s most recognizable referee, Ed Hochuli, has been assigned Monday night’s Patriots-Ravens game. While Hochuli’s sometimes verbose penalty announcements spark thoughts that his crew throws more penalty flags than the norm, that isn’t the case, at least not this year. Hochuli’s crew is averaging 15.3 penalties per game this year, according to data compiled by ESPN’s Kevin Seifert, while the league average per crew is 16.34. Only six of the league’s other 16 crews are averaging fewer penalties per game than Hochuli’s crew.

6b. Additional officiating note: Walt Anderson, who was referee of the Patriots-Colts AFC Championship Game that sparked Deflategate, has not worked a Patriots game since. According to Pro Football Reference, he’s worked three Colts games since that time.

7. When a team is 10-2 like the Patriots, the list of disappointments isn’t long. But top draft choice Cyrus Jones has to be considered one of them, given his consistent struggles as a punt and kickoff returner when considering these remarks from director of player personnel Nick Caserio from May: “There were some different players who were graded equally; I think the thing that tipped the scales in Cyrus’ favor a little bit was his overall versatility – punt return – that’s a huge component of what we do and we thought he had the ability.”

It hasn’t turned out that way to this point. 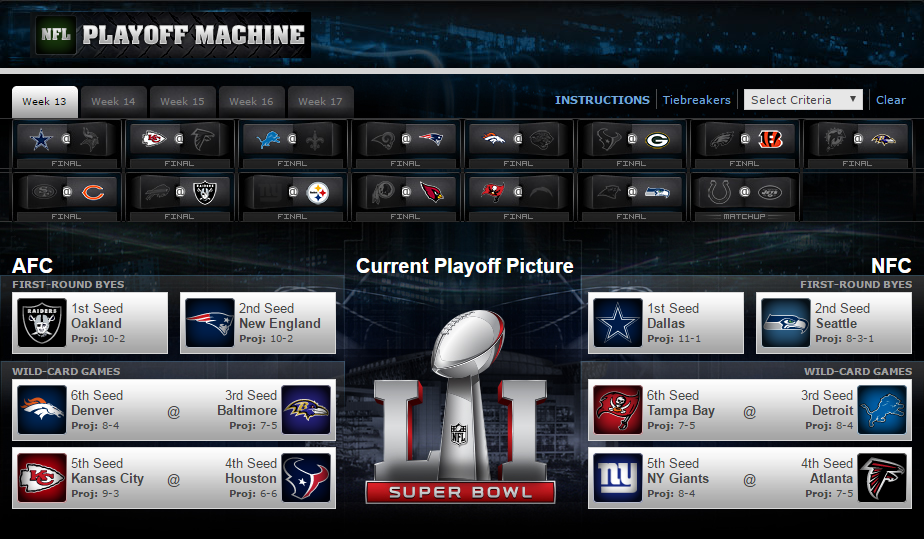 9. The NFL will announce its four games in London for the 2017 season on Tuesday, and as reported by ESPN’s John Sutcliffe, another game next season in Mexico pitting the Patriots and Raiders is potentially on the radar. A game in Mexico is something the Patriots would like, as long as it doesn’t take away a home date from their season-ticket holders. “We love playing outside the country,” team president Jonathan Kraft said on 98.5 The Sports Hub last week. “We’ve done London a couple times. We actually played in Mexico against the Cowboys in a preseason game in [1998], and we loved it. That stadium is awesome; you see why the Mexican national team in soccer has such an advantage. If the league asked us to do it, we’d love to do it. It would be a lot of fun.”

10. Neat piece by ESPN.com Seahawks reporter Sheil Kapadia that has a notable Bill Belichick twist. When Seahawks GM John Schneider was peppering former Patriots assistant to the coaching staff Michael Lombardi with questions about Belichick at Marcus Mariota’s pro day in 2015, Lombardi told him to read the book “The Obstacle is the Way” by Ryan Holiday for the best feel for what Belichick is all about.