Realizing full well that it’s only a possible four-game suspension for Julian Edelman, that the New England Patriots made it all the way to the Super Bowl without him last season and that we may well be overreacting, it’s worth at least considering whom they might bring in to replace him, right? 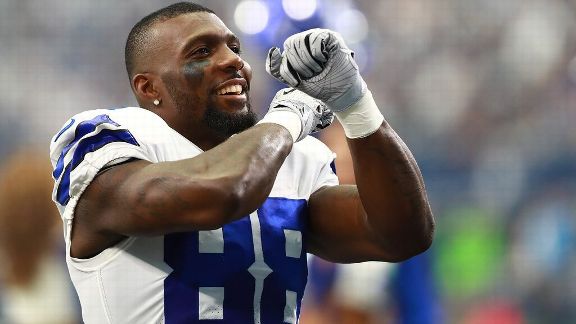 Wide receiver isn’t a position at which the Patriots were already loaded with experienced, quality depth. This offseason has seen the departures of Danny Amendola (signed with the Dolphins) and Brandin Cooks (traded to the Rams) and the additions of Jordan Matthews and Cordarrelle Patterson. Still, there are Chris Hogan, Malcolm Mitchell, Kenny Britt and Phillip Dorsett. And they drafted Braxton Berrios in the sixth round.

Can Tom Brady, Bill Belichick & Co. make something out of that? Absolutely. Is there reason to worry that Edelman’s absence from the first four games will cost New England the AFC East title? Not at all. But it makes sense that they’d at least look to add a veteran body at the position, assuming the price is low enough.

With that in mind, here's a quick look at some wide receivers who are or could be available should the Patriots look to add one to their mix between now and the start of the season:

Dez Bryant. Feels unlikely, since the Patriots would probably be looking to make a rock-bottom spend on a move like this. If Bryant were willing to sign for a rock-bottom price, he’d probably have a job already.

Jeremy Maclin. He’s been cut by the Chiefs and the Ravens in the past 12 months, but he’s a 30-year-old veteran who’s played in a few different offenses and might just be looking for a chance to stick somewhere.

Eric Decker. Didn’t contribute much in his year with the Titans, and he’s a 31-year-old whose best days may be behind him. But he’s got experience in the slot, which is where they’ll miss Edelman.

Michael Floyd. Another free agent who hasn’t generated much interest this offseason, Floyd is only 28 and was briefly a Patriot at the tail end of the 2016 season. So they know him, but they didn’t bring him back last year.

Kamar Aiken. Journeyman 28-year-old has played for four different teams, but one of those was the 2012 Patriots.

Hard to say for sure at this point in the offseason who will shake loose as rosters come together during the summer, but Houston could move on from Braxton Miller if fourth-round pick Keke Coutee beats him out for the slot receiver job. Seth Roberts is on the roster bubble in Oakland. Cleveland has a crowd at wide receiver and could move on from Ricardo Louis, Rashard Higgins or even, potentially, Corey Coleman. Brandon Coleman could be available in New Orleans. Minnesota could be ready to move on from former first-round pick Laquon Treadwell.