FOXBOROUGH, Mass. -- Wide receiver Josh Gordon could turn out to be a big steal for the New England Patriots, or he might quickly fall off as the non-factor that he has mostly been over the past four seasons with the Cleveland Browns.

In the end, a fifth-round draft choice is a modest price to pay for the chance to see if Gordon's talent might emerge again -- especially given the depleted state of the Patriots' wide receiver corps.

The Patriots also have significant draft capital in 2019: a first-round pick, two second-rounders (one from Chicago) and a third-rounder, with the expectation that they could receive two additional third-round compensatory picks for losing offensive tackle Nate Solder and cornerback Malcolm Butler in free agency.

So a fifth-rounder is a drop in the bucket, and is consistent with Bill Belichick's past approach of aggressively filling areas of short-term need.

Sometimes that can lead to a notable hit. 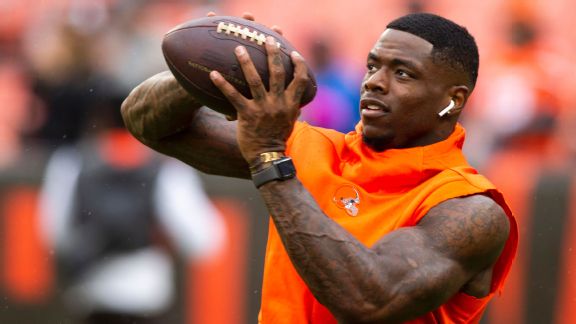 The trade for Josh Gordon and release of Corey Coleman bring the number of WR transactions in New England since training camp began to a startling number:
• Tracing the Patriots' 25 (!) WR transactions since camp began »
• What we learned in Week 2: Will the Josh Gordon lottery ticket pay off? »
• Limited risk for Patriots in acquiring talented Josh Gordon »

Other times, it's a big miss, such as acquiring receiver Chad Ochocinco in 2011 for fifth- and sixth-round picks, or defensive tackle Albert Haynesworth for a fifth-round pick that same year. Both players fizzled out quickly.

What makes Gordon a bit different from any past situation, however, is that one of the hallmarks of the Patriots' well-established program is dependability -- an area Gordon struggled with in Cleveland.

In that sense, the move reminds me of when the Patriots claimed wide receiver Michael Floyd on waivers in December 2016. Floyd had been arrested for driving under the influence (he later pled guilty for extreme DUI), was waived by the Arizona Cardinals, and the Patriots swooped in to see if he could help a short-handed unit as they prepared to make a Super Bowl run.

As Bill Belichick often says, a player gets a clean slate upon his arrival and the main risk to the Patriots with Floyd was more financial, as the remainder of his salary ($1.3 million) was a significant price to pay with three regular-season games and a playoff run ahead of them.

Floyd ultimately provided insurance while making a minimal contribution -- his signature moment coming in the regular-season finale with a crushing block to free receiver Julian Edelman on a 77-yard catch-and-run touchdown, which came after he had scored on a 14-yard reception earlier in the game. He was inactive for the AFC Championship Game and Super Bowl LI.

Given what they are working with now, the Patriots would gladly take those types of contributions from Gordon in the short-term, with the hope for more in the long run. At the same time, as history has shown, they won't be hesitant to move on quickly if he can't be a reliable teammate, or fit into the team's hard-driving culture.

Belichick has long said that when the Patriots bring a player onto the team, it gets everything that comes with him -- and with Gordon there's a lot to digest with the everything.

But in the end, a fifth-round pick is minimal risk to see how it all might come together.