FOXBOROUGH, Mass. -- One of the common lines of thinking in Bill Belichick's coaching tenure has been that September is an extension of the preseason, in the sense that the coach is still figuring out how all the pieces fit.

That's why some of the New England Patriots' slower starts in past years have usually been viewed through the prism of a team that often gets better as the season unfolds.

Is this year different?

No one truly knows the answer at this point, but for those who might make that case, it wasn't that the Patriots lost on Sunday against the Detroit Lions, it was how they lost. A week after stressing the importance of a faster start when playing on the road, they fell into the same hole for the second straight game. There were times when they weren't competitive against an 0-2 team that isn't viewed as an upper-echelon club. 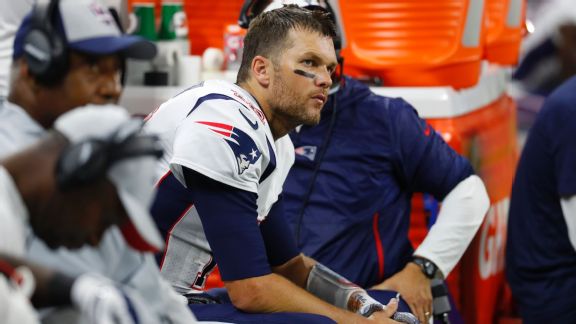 The Patriots are off to one of their worst starts in the Bill Belichick-Tom Brady era. How bad? Check out these stats: Read
• Are Fins legit contenders for East?
• Is this bad start different for Pats?

But for those who believe it's only a matter of time until the Patriots turn it around, pointing to the return of receiver Julian Edelman after a four-game suspension is a good place to start. The Patriots' offense is too easy to defend right now, with opponents locking down tight end Rob Gronkowski and forcing others to beat them. Edelman will help, and if Josh Gordon can contribute a bit, that would be another coup. As for the defense, 2017 is a good example of how early-season questions were answered as time passed.

Here is a look at some of the early-season struggles the Patriots have had under Belichick, which shows how rare it is that they didn't respond after a loss.

First-month recap: The opener against the Chiefs was filled with defensive breakdowns (remember newly acquired Cassius Marsh in coverage down the field?) and coverage busts, but the club rebounded with authority the next week in New Orleans. After squeaking out a win at home against the Texans, the coverage busts returned in a home loss to the Panthers.

What happened: The Patriots cleaned things up on defense, went 11-1 the rest of the season and advanced to Super Bowl LII, losing to the Eagles.

First-month recap: A disappointing opener in South Florida showed how newcomer Darrelle Revis was still getting acclimated to the team's defense, but the Patriots rebounded with back-to-back wins against Minnesota and Oakland, and they were never truly threatened in either game (the Raiders did have a chance to tie late). Then came the Monday night debacle at Arrowhead Stadium in Kansas City in Week 4, which is when media-based questions swirled around whether the team's dynastic run was ending.

What happened: The Patriots went 10-2 the rest of the way, en route to a stunning victory in Super Bowl XLIX over the Seahawks.

First-month recap: The Patriots decisively opened the season with a win in Nashville, before a stunning home loss to the Cardinals in which special-teams breakdowns were a big factor in the outcome. Replacement officials were working games at that time, and in Week 3, Ravens kicker Justin Tucker's game-winning field goal sailed over the upright and was ruled good (it was close). Belichick followed one of the officials off the field after the game with a fury that the team ultimately played with the rest of the way.

What happened: The Patriots went 10-2 the rest of the season, before losing to the Ravens in the AFC Championship Game at home, 28-13.

First-month recap: Coming off their third Super Bowl championship in four years, the Patriots opened the season with a solid win at home over Oakland before splitting back-to-back road games against Carolina and Pittsburgh, and then falling apart at home against the Chargers. That was the game then-Chargers coach Marty Schottenheimer noted how New England had a run of injuries that ultimately catch up to every team, which Tom Brady used as motivational fuel.

What happened: The up-and-down nature of the season continued as the Patriots were 4-4 before making a strong finishing kick to finish 10-6. They could have been 11-5, but didn't play the regular-season finale like they would have had they not had playoff positioning in mind. The team ultimately lost to Denver in the divisional round, 27-13.

First-month recap: This was the "Lawyer Milloy Game," as the Patriots had stunningly released safety Milloy the week before the opener, and he signed with the Bills. The Patriots were steamrollered in the opener. They rebounded the next two weeks, before a surprising loss in Washington, D.C.

What happened: The Patriots didn't lose again the rest of the season, all the way to Super Bowl XXXVIII against the Panthers. That might have been the best defense the Patriots have had in Belichick's tenure.

First-month recap: Drew Bledsoe opened the year as the starter, but when he took a big hit from Mo Lewis in Week 2, it opened the door for Tom Brady –- then a second-year player -- to step in. It has been his job ever since, with the team's decisive win over the Colts a surprising start, followed by a tough loss in Miami.

What happened: The Patriots rallied around Brady with strong defense and special teams, and while they lost to the Rams by a touchdown to fall to 5-5, that game was a springboard for a remarkable finishing kick: nine straight wins and a victory over those same Rams in Super Bowl XXXVI.