FOXBOROUGH, Mass. -- There was a moment in the third quarter of the New England Patriots' victory over the Minnesota Vikings on Sunday that sparked a potential dilemma: How would the team possibly replace starting left tackle Trent Brown?

Brown had entered the pop-up blue medical tent on the sideline during a break in the action, and when the Patriots’ offense returned to the field soon thereafter, he remained in the tent. So LaAdrian Waddle took over at left tackle. 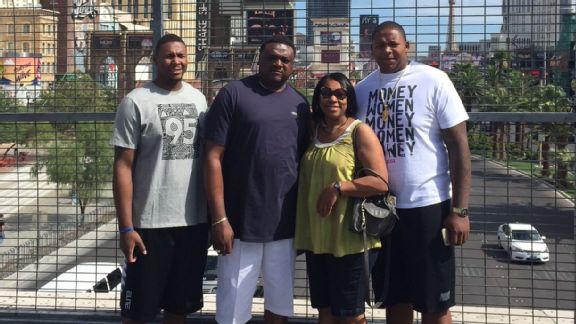 Trent Brown comes from a tight-knit family, including his father who is a cop. And that family bond is important to the Patriots' left tackle, who's enjoying a strong season protecting Tom Brady's blind side.
Meet Trent Brown.

Life without Brown lasted only one play -- he emerged from the tent and jogged onto the field to replace Waddle -- which was a relief to the Patriots.

It was also a reminder of how things have changed from nine months ago, when arguably the biggest question facing the team was how it would replace Nate Solder at left tackle. Between Solder (2012-2017) and Matt Light (2001-2011), the Patriots had a fortunate run of stability at one of the game's most important positions.

Brown has filled the void this year, becoming a key cog along the line to the point that a potential extended absence due to injury would have been a major concern.

Highlighting Brown’s contributions is topical after a game in which Brady wasn’t sacked, and Brown held up well against potent pass-rusher Everson Griffen, albeit in a game plan that featured a steady diet of short passes in which the ball was out of Brady’s hand quickly. On one of those plays, Brown's athleticism showed up as he blocked down the field and Vikings cornerback Xavier Rhodes wanted little part of the matchup.

The week before, in a win over the Jets, Brown's dominant run blocking was singled out by coach Bill Belichick in his plays of the week segment on the Patriots’ official website.

“Trent’s done a good job for us,” Belichick said. “He learned a new offense, has played left tackle before but has played right tackle more recently, so the footwork obviously is the opposite, at least initially. But, he’s done a good job and certainly is a big, powerful player that can do a lot of things that can help us at that position."