ATLANTA -- The New England Patriots' dynastic Super Bowl run led by quarterback Tom Brady and coach Bill Belichick started with a victory over the Rams on Feb. 3, 2002, and officially has come full circle on Sunday.

On the same date 17 years later, against the same opponent, Brady, Belichick and the Patriots captured their record sixth Super Bowl championship -- putting them in a class by themselves among football's all-time greats -- with a 13-3 win. How they did it had similarities to their old-school approach, by relying on their defense. 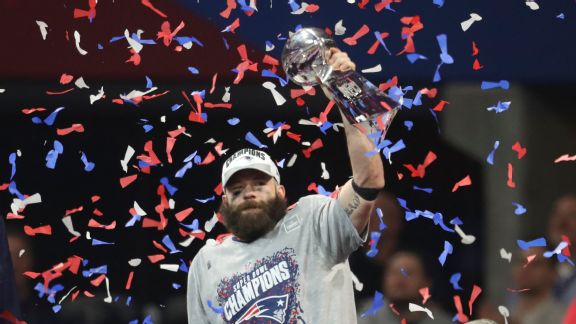 They're both from the Bay Area, but Julian Edelman and Tom Brady didn't cross paths until they became teammates in New England. And the rest is NFL history.

That's because Brady and the offense, which had been sizzling heading into Super Bowl LIII, were outplayed by the Rams' defense, led by veteran coordinator Wade Phillips, into the fourth quarter. Brady threw an interception on his first pass attempt, and the Patriots took a 3-0 lead into halftime, before things came to life in the fourth quarter with an X's-and-O's switch: The Patriots went to a run-based package on offense with one receiver (Julian Edelman), two tight ends (Rob Gronkowski, Dwayne Allen), one fullback (James Develin) and one running back (Rex Burkhead) and went empty and threw out of it.

It was the key adjustment of the game, as three straight completions -- Edelman for 13 yards, Burkhead for 7 and Gronkowski for 29 -- set up a Sony Michel touchdown run to break a 3-3 tie.

But in the end, this was about the defense, which had a 2001-like feel to it.

The link between those years struck Brady in recent weeks, with the veteran QB saying part of what made the 2018 season special for him was its throwback feel.

While the Patriots remained widely respected around the NFL, their uninspiring play in mid-September and then back-to-back losses in December had some wondering if their best days were behind them. Brady said the feeling of being 9-5 and in jeopardy of not earning a first-round playoff bye for the first time in nearly a decade brought back memories of the 2001 season -- his second year in the NFL -- when the Patriots weren't viewed as favorites. He used that as motivation and teammates took his cue.

A strong finishing kick of five straight wins had the Patriots playing their best football when it mattered most, with a scintillating AFC Championship Game victory over the Kansas City Chiefs at Arrowhead Stadium bringing out emotions in Brady seldom seen before. When the game ended, he raced across the field, took off his helmet and jumped into the arms of teammates.

"No one expected us to win that game, and that's a lot how it used to feel, before all the success. It brings back different feelings and different emotions," he said, calling it one of the greatest joys of his life.

Brady embraced the emotions associated with proving skeptics wrong. During a Super Bowl rally with an estimated 35,000 Patriots fans before leaving for Atlanta, Brady led the fans in a chant of "We're still here!" After beating the Chiefs, Brady said during an on-field interview on CBS that "everybody thinks we suck and can't win any games."

So, in many ways, this has been a rejuvenation for Brady, who turns 42 in August. He has often said his favorite championship is the "next one," and a sixth Lombardi trophy breathes new life into the final stretch of his career.

Brady has decisively reaffirmed his plans to play until 45. He enters the final year of his contact in 2019, with a bloated salary-cap charge of $27 million, which means a contract extension in the offseason is a strong possibility. That would be a signature move as the Patriots plan for a 20th season (and then some) with Brady.

The title further also adds to the legacies of Brady and Belichick, who turns 67 in April, as the most successful quarterback/head coach tandem of all time.

Brady becomes the only player to win six Super Bowls, breaking a tie with Charles Haley. Brady is now 6-3 in Super Bowls; no player has appeared in more. Brady had entered the game as the all-time Super Bowl leader in passing yards, completions, pass attempts, touchdowns and starts. He extended those records.

Also, the victory is Brady's 237th overall, passing Colts kicker Adam Vinatieri for the most wins of any player in NFL history. His 30 playoff wins are easily the most by a starting quarterback in NFL history, with his boyhood idol, Joe Montana, next on the list with 16.

As for Belichick, he joins George Halas and Curly Lambeau as the only head coaches with six NFL titles. He had been one of four NFL head coaches to win five or more championships since the league began postseason play in 1933, but the only one to win five Super Bowls.

Brady and Belichick have been the pillars of the Patriots' success, along with owner Robert Kraft, who ties the Rooney family for the most Super Bowl wins in NFL history. Accomplishing that feat in 25 years highlights the remarkable run of success that began Feb. 3, 2002, which Kraft called the greatest day in his ownership tenure.

Continuity with Brady and Belichick, through ups and downs, has helped drive the success.

"I'm pretty proud that we've been able to keep him and our quarterback together for 19 years," Kraft said in an interview with ESPN in January. "Please God, it will be two decades next year. In today's era of free agency and people going in different directions, that's pretty cool.

Kraft called Brady "definitely the greatest player of all time, not just quarterback," citing his leadership and connection with teammates who are nearly half his age. Of Belichick, he said, "He's the GOAT of coaches, just like our quarterback is the GOAT of quarterbacks. And no one can dispute it."

It becomes even harder to do after a sixth Super Bowl championship.