1. Open-minded approach: When receiver Phillip Dorsett entered unrestricted free agency last offseason, his first choice was to return to the Patriots and that contributed to him not visiting with other teams. As for this year?

"I would say that will probably be a little different," said Dorsett, who is one of a handful of Patriots free agents whose status has been overshadowed by quarterback Tom Brady's. "Last year, I had my heart set on where I wanted to go and I didn't have an open mind. This year, I know I have to go into it with an open mind."

That's not to say Dorsett doesn't view his three seasons in New England fondly, which included winning a Super Bowl championship and being widely lauded for his professionalism and team-first approach after the Patriots acquired him in a trade for quarterback Jacoby Brissett.

"It's just something that I feel like I need to be honest with myself about," he said. "The way the roles changed in New England in the middle of the season out of nowhere … it took me off the field. So at the end of the day, I have to be smart about it and make the best decision."

Dorsett's playing time and production dipped notably after he played 61 snaps in an early December loss to the Texans. He averaged 13.5 snaps over the final four games, when the stakes were highest, and totaled two catches for 56 yards. He finished the season with 29 catches for 397 yards and five touchdowns.

His 50-yard reception against the Dolphins in the season finale was a reminder he can still deliver big plays, but the reduced role could be an indication the Patriots are prepared to move away from him in 2020.

The team has Julian Edelman, Mohamed Sanu and 2019 first-round pick N'Keal Harry as its top receivers under contract, with the expectation more speed will be added to the mix.

Dorsett said Brady's uncertain status has little bearing on his own. Asked if he was following that storyline, he laughed.

"Every channel you turn on, they're talking about it," he said. "So it's hard not to follow it." 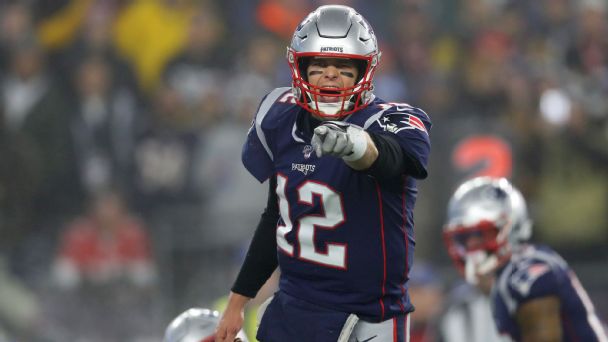 2. Weis relays his text exchange with Brady: Former Patriots offensive coordinator Charlie Weis always had a direct, blunt way of delivering a message, and that has continued in his role as a co-host on Sirius XM NFL Radio's "Opening Drive" program. Weis has remained close with Brady, and in response to rampant speculation on Brady's future, he relayed the following on Thursday's show: "I do have one bit of scoop for us. I've been texting with Tommy. I don't [usually] pass along these conversations, but one thing he told me -- 'Nobody knows anything. So anyone who is telling you they know, they don't know.' I'm not going through any other part of the conversation [but] I followed up and he said, 'Clean it up.' So I'm cleaning it up."

3. Brady's future in the red zone: When Brady tells Weis no one knows anything, this is my translation from Brady's viewpoint: How can anyone know anything about my future team when I don't know myself, as there is currently no indication of the type of financial/annual commitment coach Bill Belichick is willing to make? Once Brady gets that information definitively, and knows what he is agreeing to or walking away from, then the pieces should fall into place. That's why news that the players' vote on the collective bargaining agreement is to be completed by March 12 is significant; it will determine the financial rules under which all teams operate and should finally force Belichick to show his hand with four days on the calendar before other teams can legally negotiate with Brady's agents.

4. CBA from a Patriots perspective: Dorsett told me he is undecided on how he'll vote for the CBA, and plans to study it and reach out to Patriots player representative Matthew Slater before deciding. It highlights Slater's important role behind the scenes as a conduit to his teammates. "I've seen him a couple times this offseason. He talks about it, and is doing everything he can [to keep us informed]," Dorsett said. Offensive lineman Ted Karras and long-snapper Joe Cardona are alternate reps. Karras, by the way, told me he voted for the new CBA.

5. Rivers' workout crew at Gillette: A handful of players are continuing to work out at Gillette Stadium this offseason, including fourth-year defensive end Derek Rivers, who told me the group includes veteran cornerback Jason McCourty, core special-teamer Brandon King, practice squad linebacker Terez Hall and practice squad safety Malik Gant, among others. "It's a good group of younger guys and older guys. We get our work in, then laugh and joke with each other," said Rivers, the 2017 third-round pick from Youngstown State who spent his rookie season and last season on injured reserve with a knee injury. "Coming off the injury, praise God, the knee feels awesome. I'm looking forward to seeing all the guys back, offseason workouts, and then camp. And we'll see what happens from there."

6. McCourty's presence: The Patriots have a decision to make on cornerback Jason McCourty, who has a $500,000 option bonus on March 18 that would activate the second year of his contract. If they don't pick it up, it would create about $4 million in salary-cap savings. Ian Rapoport of NFL Media reported the Patriots intend to pick up the option, which is a small price to pay when factoring in how McCourty's A-plus leadership is important to have around young corners J.C. Jackson and Joejuan Williams, both of whom show promise on the field as they continue to learn what it means to be a professional. McCourty's presence at the stadium this offseason, as noted by Rivers, is one example of how that manifests itself behind the scenes.

7. Stallworth to run Boston Marathon: Donte' Stallworth played for the Patriots in 2007 and 2012, and he has maintained connections with many teammates, including Brady, Edelman, Patrick Chung and Devin McCourty, among others. So when he challenged himself years ago to run a marathon before he turned 40, Boston was an obvious choice. Stallworth, who turns 40 in November, has been training for the April 20 race and will run it as part of the Joe Andruzzi Foundation. Andruzzi, of course, won three Super Bowl championships with the Patriots (2000-04). "I've seen [Tedy] Bruschi do it a number of times," Stallworth said. "He's an inspiration."

8. Patriots' Butler switches agents: Fourth-year Patriots defensive tackle Adam Butler quietly switched agents in recent weeks and is now represented by Andy Simms and Cody Recchion of Young Money APAA (the same agency that represents Patriots teammates Devin and Jason McCourty, Duron Harmon and Jonathan Jones). This is significant from a team perspective because the 6-foot-5, 300-pound Butler has emerged as a valuable cog (6 sacks last season) and extension talks might soon be on the radar. Former Patriots D-line coach Bret Bielema said that if football had an "assists" category for linemen setting up others to make plays, Butler would have ranked highly. This offseason, Butler is scheduled to become a restricted free agent, and because he entered the NFL as an undrafted free agent out of Vanderbilt -- and New England would receive no compensation if another team signed him away via an offer sheet -- it might lead the Patriots to tender him at the second-round level (projected around $3.2 million) if an extension isn't broached.

9. Andrews trending in positive direction: Patriots starting center David Andrews had expressed optimism about returning to play in 2020 after missing last season because of blood clots in his lungs, and I'm told he continues to receive positive medical reports and feels like he is in excellent condition physically. When I caught up with Andrews in January, he noted he had some important tests in late February. My understanding is the plan is to continue taking a cautious approach -- there is no reason to rush things now -- but things appear to be trending in the direction Andrews wants them to go.