1. Two-year financial window: The Patriots are among the NFL's leaders in a category no team wants to be leading in 2020 -- salary-cap charges for players no longer on the team. They have nearly $23 million in dead cap space. Making that figure sting even more is that $13.5 million of it is devoted to quarterback Tom Brady.

This is a reminder that while the salary cap can be manipulated, the charge always comes due at some point. And in 2020, the Patriots are paying the price for some of their past decisions. 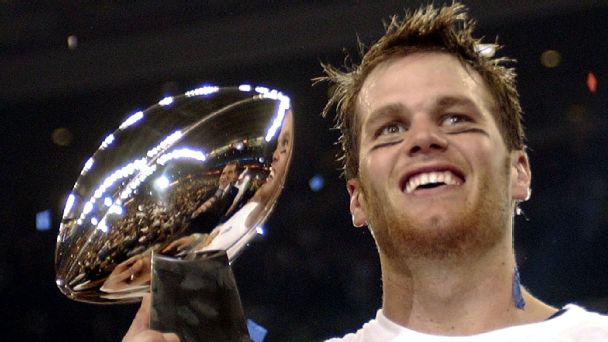 On March 22, ESPN presents a seven-hour Tom Brady marathon highlighting his Super Bowl performances over the past two decades. (All times are ET)

Previous coverage on ESPN.com:
• Ranking Brady's playoff performances
• Brady's kindness not lost on this reporter
• 'Tuck Rule' still has Jon Gruden fired up
• How Patriots came back in Super Bowl LI
• Patriots' SBs could have gone other way

But while the financial crunch is most definitely a factor -- it was the impetus for trading safety Duron Harmon to the Lions, for example -- the two-year snapshot looks more favorable.

In 2021, the Patriots' cap commitments reduce significantly. They are positioned to have in the range of $100 million of space next season, among the NFL's top teams.

So the way I view how coach Bill Belichick is approaching building the team is with this two-year snapshot in mind. The Patriots finished last season with the NFL's oldest roster, according to research by ESPN's Stats & Information, and had more players over 30 (17 total) than any team in the NFL.

Brady's departure for the Tampa Bay Buccaneers is the catalyst to shift to a more definitive youth movement. It's a time to clean up the salary cap and pay some bills that have been pushed off. And it's a time for the Patriots to position themselves for optimum flexibility in 2021 when the financial handcuffs are loosened.

The Patriots should still be competitive in 2020, as there are plenty of talented players on the roster. Re-signing pillars such as safety Devin McCourty and special-teams star Matthew Slater, and putting the franchise tag on guard Joe Thuney, reflect how this is not a rebuild as much as it is a reboot.

But what makes this one different from those in the past (e.g. 2010) is that Brady isn't a part of it. He always provided a security blanket for any points of transition.

And therein lies the intrigue for what's ahead.

2. Thoughts on Brady's departure: What are the primary factors that led Brady to this outcome? My thoughts:

3. Self-preservation might be Brady's biggest challenge: The No. 1 rule in chronicling Brady's career is that if you bet against him, do it with extreme caution, so I expect big things from him in Tampa Bay. But if it heads in the wrong direction, what might be the No. 1 factor? That was a question I asked a front-office executive who has a working background with Buccaneers coach Bruce Arians, and this was the response: Self-preservation, because quarterbacks under Arians have a history of taking a pounding with high sack totals, in part because of a heavy emphasis of downfield throws that take time to develop. I ran some numbers, and this is what resulted: Arians' offenses in Pittsburgh (2007-2011), Indianapolis (2012), Arizona (2013-2017) and Tampa Bay (2019) surrendered 508 quarterback sacks. In that same time period (with Brady's lost season in 2008 and Arians' 2018 season on the sideline canceling each other out), Brady was sacked 318 times in New England (also factor in Brady missing four games in 2016 because of suspension). Surely, there will be some adaptation to ensure Brady isn't pounded into submission, but the point is worthy of note.

4. New perspective on Patriots' hiring of Fisch: With 2019 fourth-round draft choice Jarrett Stidham now atop the Patriots' quarterback depth chart, it adds a new layer of context with which to view the team's hiring of Jedd Fisch as an offensive assistant in February. Fisch's primary background is with quarterbacks, specifically in developing those at an earlier stage of their careers, and I'd expect that to be his role in New England. So between Josh McDaniels and Fisch, Stidham can expect high-level coaching. As for Stidham and what he might become, I asked one general manager how he viewed him coming out of Auburn in the 2019 draft. The answer: One of the smartest quarterbacks in the class whose ceiling was as a really good No. 2.

What you need to know about the New England Patriots:

5. Promotions for Patriots assistants help players cash in: When coaches from New England move on to head-coaching jobs -- as Matt Patricia (Lions), Brian Flores (Dolphins) and Joe Judge (Giants) have done the past three years -- it is usually good financial news for Patriots players. Does defensive end Trey Flowers get the five-year, $90 million he received from the Lions in 2019 anywhere else? Or does Jamie Collins get a three-year, $30 million deal in Detroit? Does outside linebacker Kyle Van Noy see the four-year, $51 million pact he agreed to in Miami if Flores isn't there? Does niche special-teamer Nate Ebner have a market anywhere else in the NFL if Judge -- his former coach -- isn't in New York? No. No. No. No.

6. Coronavirus and its impact on 2020 season: In conversations with players, coaches and executives in recent weeks, one of the things that consistently came up in discussion was how limited offseason programs (if any) due to the coronavirus pandemic will affect multiple parts of the team-building process. It is already a challenge for rookies to make the jump from college to the NFL, but the general thinking is this will make it even harder for them to contribute in their first season (similar to rookies from the 2011 lockout year). Also, a player's familiarity with a team's system now has some added value because there won't be much offseason practice time, if any. One example: Brian Hoyer is a potential quarterback option to pair with Stidham.

7. What are Patriots getting in Allen? The Patriots' two-year agreement with free-agent defensive tackle Beau Allen (Buccaneers) flew under the radar this past week because of Brady's departure. Allen is 6-foot-3 and 327 pounds, and if he adapts well to the Patriots' defensive-line techniques, he projects as a starter next to Lawrence Guy. Here is a scouting report from a coach Allen played under: "Easily one of my favorite guys I have ever coached. He is a very good athlete at that size. Was a hockey player growing up. Has the right combination of hard work and discipline but doesn't take himself too seriously. Works extremely hard in the weight room and classroom. Good person that guys like to hang around [with] outside the building."

8. Opportunity trumps total dollars for Karras: Stepping in for injured Patriots center David Andrews in the 2019 season, free agent Ted Karras got a taste of what it's like to be on the front lines every Sunday -- and experiencing that again ultimately trumped the possibility of making more money to stay in New England in 2020. That explains Karras' decision to accept a one-year deal from Miami worth a maximum of $4 million instead of staying in New England on a two-year deal that had a higher total value. Karras started 15 games in 2019 after having started three over the first three years of his career, and in Miami, he has a clear path to the starting center spot vacated by Daniel Kilgore. In New England, he would have been an insurance policy behind Andrews (who's optimistic of his chances to return) and starting guards Thuney and Shaq Mason.

9. Learning from Welker? The Patriots' decision to put the franchise tag on Thuney at $14.78 million marked the first time the organization has used the tag since 2015 with kicker Stephen Gostkowski, and came as a surprise in the sense that the sides had not been actively working toward a long-term extension. Now it sets an expectation in future contract talks, which is something the Patriots experienced in 2012 and 2013 with receiver Wes Welker. In 2012, the Patriots had put the franchise tag on Welker at $9.5 million, which was a decision some in the organization would later regret. That's because the next offseason, when the Patriots and Welker were negotiating a longer deal, the expectation in Welker's camp was that the deal would have a floor of $9.5 million per season as that was how the team valued him tag-wise. It complicated the talks, and ultimately led Welker to sign with Denver.

10. Did you know: No player has registered more offensive snaps than Thuney since he entered the league in 2016. According to research by ESPN's Stats & Information, it's Thuney (4,273), followed by Eagles center Jason Kelce (4,190) and Buccaneers left tackle Donovan Smith (4,129).