NEW ORLEANS -- Anthony Davis called it one of the five best alley-oops in his career.

According to DeMarcus Cousins, it was all about the pass.

"I put it right on the money for A," Cousins said with a big smile underneath a hood and circular sunglasses. "And he did the easy part: He finished it."

Either way, Davis' 180-degree finish of Cousins' lob from the top of the key early in the third quarter was a triumphant moment for the much-parsed new pairing of the elite NBA big men, one Cousins underlined by raising his arms above his head, Maximus Decimus Meridus-style, as he backpedaled the other way.

"He threw it a little short so I had to go get it," Davis said.

"Nah, he actually threw a good pass," Davis conceded. "When I caught it, my intention was to dunk it backward, but I can't remember who it was, but he was going to tip it. And then I caught it and, I don't know, it just happened."

That combination of ease and surprise could easily extend to the entirety of the New Orleans Pelicans' 100-77 rout of the Portland Trail Blazers.

The Blazers came into the game winners of five of their previous six, looking very much like the biggest threat to Denver Nuggets in the race for the Western Conference's eighth and final playoff spot. The Pelicans emerged from Saturday's overtime matchup in Charlotte with their third win since the All-Star break, but it was clouded by the late-game benching of their second star big man.

Their fourth win since the break, and first consecutive victories, was more decisive. The Pelicans finished with a season-low five turnovers, allowed a season-low 77 points and a season-low 30.3 percent from the floor and earned another big mark in the positive side of the ledger for their 25-game evaluation of their new big-to-big connection.

"It's -- excuse my French -- it's a b---- for bigs," Cousins said. "You think you get a break when one guy goes out and another one is coming in. Or you've got to pick your poison with both of us."

The Pelicans didn't have much of a choice in the second quarter, when a rolled left ankle led Davis to check out with 5:46 left in the first half, conceding the floor to Cousins.

In the eight prior games in which Cousins has suited up for New Orleans, the Pelicans had thrived with Davis and not Cousins on the court but struggled when Cousins played without Davis. The Pelicans had a 114.4 offensive rating and a plus-8.3 net rating with Davis but no Cousins, but an 87.6 offensive rating and a minus-16.2 net rating with Cousins but no Davis, according to NBA.com/Stats.

Cousins responded in Davis' immediate absence, scoring six points on three shots, earning a trip to the free-throw line and recording a steal in less than four minutes of work. A five-point lead when Davis checked out ultimately became a 14-point advantage before Davis could return to start the third quarter. Overall, Cousins was plus-17 on the night, with the Pelicans sporting a 110.4 offensive rating and a plus-27.4 net rating with him on the floor.

"I was watching the game," Davis said. "Everyone was playing well, and we're going to need this if we want to continue to make this push."

Indeed, unlike in games past, the "other" Pelicans not only held their own but proved to be a source of strength. While Cousins and Davis again did much of the heavy lifting, combining for 37 points and 24 rebounds in less than 31 minutes apiece, the non-Boogie/Brow Pelicans shot 56 percent from the floor.

While Jrue Holiday (10 points on 4-for-6 shooting, two assists, three steals, two turnovers) again appeared to struggle to find a groove in a less-prominent offensive role, he and Solomon Hill continued to serve as the backbone of a defense that has maintained its elite look despite the addition of Cousins and a rotating cast of 10-day additions.

"We have the same system," Pelicans coach Alvin Gentry said. "[Associate coach Darren Erman] has done a great job of working overtime with those guys. When we get new guys on our team, we spend time with them in a team situation but we also try to break it down individually. He does a great job of walking them through what we try to do as far as weak-side rotations, pull-ins and things like that, and the guys have really caught on."

Damian Lillard (29 points) and CJ McCollum (eight points) combined to shoot 40 percent from the floor, and the rest of the Blazers combined shot just 24 percent.

"I've just kind of been taking it personal," Hill said. "I respect whoever's on the other end of the court, but it's almost like that can change the game. CJ McCollum and Damian Lillard can put up 65 together easily. We take one of the heads of the snake away and it can change the game." 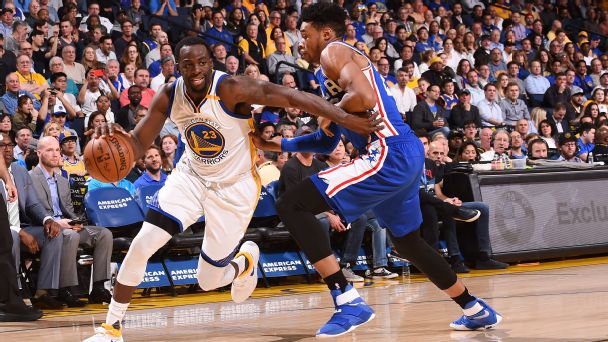 On the other end, the Pelicans' star duo teemed with excitement over the possibilities that lie ahead.

Cousins said he and Davis have talked often lately, including about utilizing more big-to-big pick-and-rolls similar to the ones deployed by Blake Griffin and DeAndre Jordan.

"It's hard to stop," Cousins said about the Clippers' screen-roll combo. "If me and A get involved in that, it could be something special as well."

Much like those eagerly tracking their game-to-game progression, Cousins couldn't help think a bit broader, too.

"I guess you can say it's something that hasn't really been seen," he said. "And if it has been seen, it's been a while since it's been seen. It's different, but it can become something special. It's just going to take time."