NEW ORLEANS -- While the slimmest of percentage points technically keep the Pelicans in the race for the eighth and final playoff seed in the Western Conference, it's hard, even after blindsiding one of the best teams in the NBA, to completely ignore the writing on the wall.

"All we'll do is continue to play, guys," Pelicans coach Alvin Gentry said Friday night. "I don't know what's going to happen. What we talk about doing is going out and playing every game like we're in the playoffs."

A 128-112 victory over the Houston Rockets, three weeks after losing by 30 to the same team on the same court to kick off the DeMarcus Cousins era, certainly won't hurt their cause. New Orleans picked up a half-game in the standings as a result.

But with 13 games left to play, the Pelicans are just as close to a bottom-three record (5 1/2 games) -- and thus a greater chance at keeping the top-three-protected 2017 draft pick they sent to the Kings as part of the Cousins trade -- as they are to a spot in the postseason.

The only certainty the rest of this season can offer is a chance to test a roster thrown into flux by the blockbuster trade for Cousins during the All-Star break.

As the past week-plus illustrates, the early returns have been hard to pin down: The Pelicans failed to break 90 points in two straight games; beat the Hornets on the road in overtime with Cousins benched late; held a surging Blazers team to 77 points; lost to the Heat; then took down an NBA Finals contender without Cousins.

"We added Lou Williams, and it [causes] a little bit of a ripple that you've got to get over a little bit," Rockets coach Mike D'Antoni said. "You add someone like Cousins, that's a boulder going into a river. There are some waves.

"It just takes a while. And there's no substitute [for time]. You can't get around it."

Friday's victory brings the Pelicans to 2-0 without Cousins and 5-7 overall since the trade, with the on-court pairing of Cousins and resident superstar big man Anthony Davis still a net negative despite occasional flashes of grandeur.

But while the Boogie-Brow tandem will continue to draw the spotlight, the microscope isn't reserved only for the two All-Stars amid what will amount to a 25-game petri dish. Especially when the minuscule 10-game sample we currently have of the duo remains influenced by a glaring lack of shooting to take advantage of the many looks they produce.

Which makes Friday's offensive explosion from Solomon Hill all the more interesting.

Hill, who procured the most lucrative contract handed out by the Pelicans this past offseason, not only had more points than any other teammate -- yes, including Davis -- he also finished with more than he has ever had in an NBA game: a career-high 30, to go along with seven assists, six rebounds and six 3-pointers.

It's the first time Hill, a four-year player at Arizona before being drafted in 2013, has scored 30 points in a game since high school.

While Hill has been one of the main reasons the Pelicans have a top-10 defense for the first time in the Davis era, the offense has been a season-long struggle. The 25-year-old is averaging 6.5 points per game while shooting 33.3 percent from 3, good for a player-efficiency rating of just 7.67. A top-20 defender at his position, according to ESPN's real plus-minus, he has, effectively, given away most of the value he brings on that end with a minus-1.27 offensive RPM. 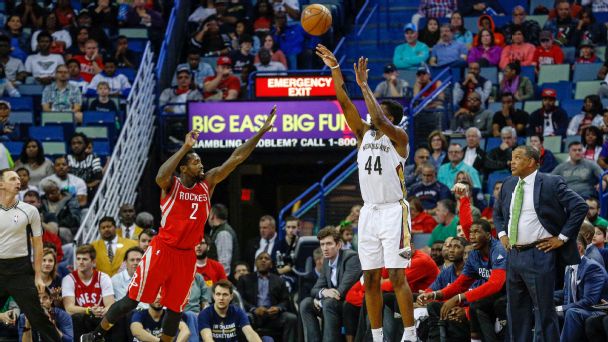 Solomon Hill's career night helped the Pelicans upset the Rockets despite the absence of DeMarcus Cousins and another 40-point triple-double from James Harden.

But with the Pelicans turning to a rotating cast of 10-day contract players to fill the starting 2-guard position vacated by Buddy Hield, Hill has begun to see a more assertive role on offense while still defending the opponent's best wing scorer. Hill has been more assertive in attacking downhill from the perimeter, as best evidenced in a 16-point performance against Charlotte this past Saturday. A heady player and willing passer, Hill could also be seen against the Rockets bringing the ball down the court and starting the offense.

Gentry said Hill's creation helped the fluidity of the ball movement, one of the Pelicans' main goals all season, and he also liked Hill's aggressive approach in attacking the basket and committing to the follow through on his shot.

"A few games before, he played well [but] I thought he was shooting and turning and leaving and not staying in his shot," Gentry said. "I thought he stays in his shot now. He's shooting the ball better from the perimeter, but he's doing a better job at attacking the rim also."

Hill is unlikely to end up with a featured role on the offensive end anytime soon. The Pelicans traded for that type of player weeks ago.

"The guy is averaging 25 [points] and 12 rebounds," Gentry said of Cousins. "I don't think you can ever take that away from your team and [think that] you're a better team."

But with such firepower in the frontcourt, being able to take advantage of a weaker defender, as Hill did Friday against the likes of Ryan Anderson and James Harden, can indeed make a difference.

"Every night, A.D. or [Jrue Holiday's] going to get their best defender," Hill said. "Just got to take advantage of what they give me."

The Pelicans might not reap much from this season in the standings, but there's still very much to be learned about the future in this final month of games.