Mark Ingram is no stranger to sharing the New Orleans Saints' backfield, after he split touches for years with the likes of Pierre Thomas, Darren Sproles, Chris Ivory, Khiry Robinson and Tim Hightower.

As such, he insisted that the arrival of Adrian Peterson won’t faze him either.

In fact, Ingram said he has followed Peterson since his freshman year at Oklahoma, and the opportunity to play with him will be “special.” 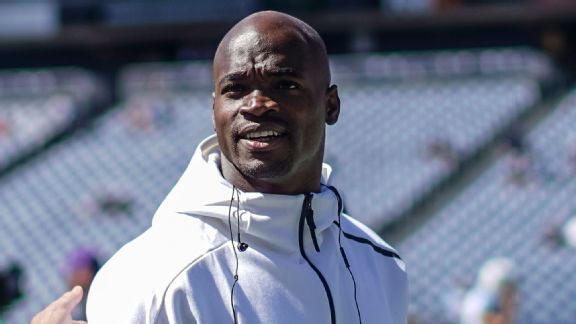 The veteran running back plans to sign a two-year deal with the Saints, he told ESPN's Josina Anderson on Tuesday. Read more

• Why it took 2 months to find a team
• AD's fantasy value in New Orleans?
• Saints-Vikings? Get ready Minneapolis
• Deal makes sense for Saints, Peterson
• Vote: How will AD perform with Saints?

“I’m a big fan of his. I admire his running style. I admire everything he’s been through, the adversity he’s overcome in knee injuries, having some 1,000-yard seasons, being a perennial leading rusher,” Ingram said on a conference call with the New Orleans media. “The résumé, the name speaks for itself. And just having the opportunity to be in the same running back room with that guy, pick his brain, learn from him is only gonna make me better.”

Of course, Ingram hasn’t always loved sharing the ball, as he has demonstrated with a couple of emotional, competitive outbursts over the years. But he has been lauded by coaches and teammates for having a great attitude throughout his frustrating early years and his successful later years, and he has grown into a well-respected team leader.

Ingram said nobody from the Saints called him to discuss the Peterson move, but he was prepared for another running back to come in after the team let Hightower leave for the San Francisco 49ers in free agency.

“Listen, man. It’s nothing new. I’ve been sharing the ball with one or two or maybe even three guys since I got here,” Ingram said. “I figured we was gonna draft somebody or get somebody in free agency. We still might. So it’s not surprising.

“This sounds a little cliché, but it’s hard to be the guy that’s just getting every handoff -- not only in [Peterson’s] case but in Mark’s case,” Payton told reporters while participating in the Zurich Classic pro-am on Tuesday. “And we were fortunate for a few years to have a guy like Tim Hightower. I’m not by any way saying that his role will be the same as Tim’s. But I think it’s important in our game to have a number at that position that can handle the length of the season.”

Saints quarterback Drew Brees said in an interview with New Orleans’ WWL Radio that he also is excited about the move.

“Yeah, that was big news today with Adrian Peterson becoming a Saint,” Brees said. “Obviously, I’ve had a ton of respect for this guy for a long time, as has just about everybody in our league and our locker room.

“I know he’s going to come in with a chip on his shoulder, ready to show what he can do. And I’m sure he’ll embrace the opportunity.”

Brees, who has famously overcome a major injury and some early struggles in his career, said he absolutely believes in the idea of the “chip” that Peterson has as a 32-year-old running back who was released by the Minnesota Vikings after he missed most of the previous season because of a knee injury.

“Listen, it’s a must,” Brees said. “It really is a must, and I just think certain guys are just wired that way. I play this game because I’ve been blessed to play this game, and I want to be the best that I can at it while I have this opportunity. Throughout my career, there have been plenty of moments where I was told that it was not going to happen for whatever reason. Too small, too short, too this, too that. And there is a little bit of satisfaction proving people wrong, but I want to be great because I’m just wired that way. …

“Well, Adrian Peterson, look at his career. He has an ACL injury, and he comes back and rushes for 2,000 yards. I mean, what that guy has accomplished in the face of a lot of adversity has been tremendous.”