That’s overstating things a bit, obviously. The New Orleans Saints' dynamic rookie running back and the future Hall of Famer didn’t play the exact same role, since Kamara has mainly been used as a pass-catcher so far (including his 10 catches for 71 yards and a touchdown in Week 4). 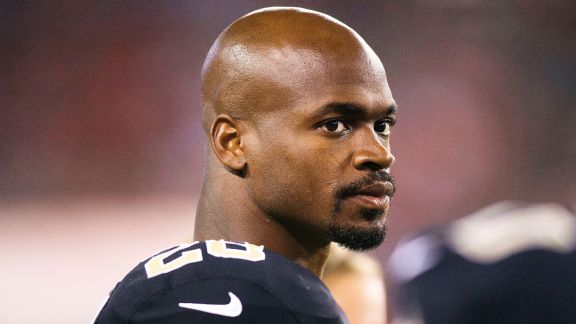 Clearly the Saints decided that they didn’t have much use for Peterson since they preferred the more versatile duo of veteran Mark Ingram and Kamara and wanted to get both of them on the field as much as possible.

Sean Payton hinted recently that the Saints might not have signed Peterson if they had known they were going to draft Kamara in the third round -- or, at least, that the vision for Peterson wouldn’t have been the same.

“The difference between us and the NBA is that the NBA has a draft and then they follow it up with free agency and sign what they can’t draft,” Payton said when asked about New Orleans’ crowded backfield.

The need for Peterson was lessened even more when Kamara proved to be such an impact player as a rookie -- with a total of 83 rushing yards, 147 receiving yards and two touchdowns through four games, not to mention his 50-yard between-the-tackles touchdown run with the starting unit in the preseason.

So the Saints traded one of the NFL’s all-time greats to the Arizona Cardinals on Tuesday for an unspecified conditional draft pick, meaning they spent about $2.8 million for four games, 27 carries, 81 yards and no touchdowns.

For fantasy purposes, this doesn’t really change much. Peterson was barely playing in recent weeks (just six snaps in Week 4, with four carries for four yards).

What you need to know in the NFL

This does solidify the value of both Ingram and Kamara in New Orleans, where we now know for certain that the Saints won’t try to force more touches or potential vulture touchdowns to get Peterson involved. Throw in the fact that New Orleans recently placed fullback/touchdown vulture John Kuhn on injured reserve, and Ingram looks like an obvious fantasy starter, with Kamara as a likely RB2/flex play every week, especially in PPR leagues.

As for Peterson, I’m not willing to call him a “bust” just yet -- just a bad fit for New Orleans.

I’m still dying of curiosity to see what A.D. can do if he gets steady touches in Arizona, since there still isn’t enough evidence that he has run out of gas. Peterson, 32, was fully healthy all offseason (and still showed glimpses of looking like a freight train when he got to the second level of the defense in practice). Plus, he just led the NFL in rushing two years ago when he was last healthy at age 30.

However, Peterson wasn’t a good fit in New Orleans because he wasn’t versatile enough for their pass-first offense. Ingram is much more trusted as a pass protector. And both Ingram and Kamara are better pass-catchers.

That meant Peterson entered the game almost exclusively in obvious run situations, and defenses were ready for him.

Peterson was hoping he would get the chance to exploit nickel defenses in New Orleans and see fewer eight- and nine-man fronts than ever before. But Peterson has never been as comfortable running out of the shotgun, and those snaps usually went to Ingram and Kamara.

I’m also not going to kill the Saints for rolling the dice on Peterson, who didn’t cost all that much in the grand scheme of things. They only guaranteed Peterson $3.5 million (and I’m assuming the Cardinals will pick up the remaining $700,000 and change in base salary from Weeks 6-17, though that has not yet been confirmed).

The Saints needed a veteran backup running back since injuries are so common at the position. There was plenty of work for Tim Hightower and pass-catching backup Travaris Cadet over the past two years. Hightower, 31, had a total of 923 rushing yards, 329 receiving yards and nine touchdowns in just 24 games played over the past year and a half.

The bigger question is whether the Saints should have avoided signing a “celebrity” backup, because of the distractions that came with overblown headlines over Peterson’s sideline glare toward Payton in Week 1 or his quote that he didn’t “sign up for nine snaps” in Week 2. There was no indication that Peterson’s frustration had been an issue in New Orleans or affected team chemistry. He kept a positive attitude and seemed to be well-liked and respected by his teammates, including the other running backs.

Now that the Saints are ready to move on to a less famous backup, it’s worth noting that Hightower remains available after being released by the San Francisco 49ers this summer. Or they could consider promoting second-year running back Daniel Lasco from their practice squad, among other options.