EAST RUTHERFORD, N.J. -- The New York Giants are in a rebuild. They won’t want to say it. Nobody likes that word in a league in which the current Super Bowl champions had a losing record the previous season. Admitting to a rebuild is the equivalent of flipping the bird to your paying customers for the rest of the calendar year.

However, it's hard to look at the big picture and find a better term for what the Giants are doing and what really needed to be done earlier this year. They’re 1-6, and they just traded starting cornerback Eli Apple, a 2016 first-round pick (No. 10 overall) by the previous regime who has played fairly well this season.

Defensive tackle Damon Harrison also was traded Wednesday morning to the Detroit Lions for a fifth-round pick, according to ESPN’s Adam Schefter. That further solidified to the rest of the league that a "for sale" sign is hanging on the Giants' defense. Just about anyone in East Rutherford is available for the right price.

At least, that’s the impression multiple NFL sources had Tuesday afternoon. Anybody on the Giants' defense could be had.

Apple has had his problems since joining the Giants. He was far from a building block after he was suspended and benched during a tumultuous season last year. But he’s a usable player at a premium position who has talent and value on the open market. Now he is in New Orleans in exchange for a 2019 fourth-round pick and a 2020 seventh-round selection.

Harrison played well since being signed by the Giants in the 2016 offseason, but he’s soon to be 30 years old, with a hefty contract. He wasn’t a building block.

Now it’s a question of “Who’s next?” in exchange for draft capital that will yield more promising young players.

This is much more of a statement on the current state of the Giants than on Apple or Harrison. The Giants have lost 19 of 23 games the past two seasons, and general manager Dave Gettleman is in “sell” mode, trying to turn over the roster he inherited from Jerry Reese after a massive offseason miscalculation.

The Giants tried to put a Band-Aid on their roster after a 3-13 season by primarily signing and trading for veteran pieces while recommitting to quarterback Eli Manning. We’ve seen how that has unfolded. Many of the Giants' free-agent acquisitions flopped, and they’re currently tied for the worst record in the NFL. As for their 37-year-old quarterback, he has seven touchdown passes in seven games and looks like a boxer stumbling, trying to avoid that final knockout blow. He might not make it through the 16-game season.

All of this has forced Gettleman to throw his hands in the air and concede before the bye week. It’s time for the overhaul, a full-blown rebuild after his initial approach backfired badly. 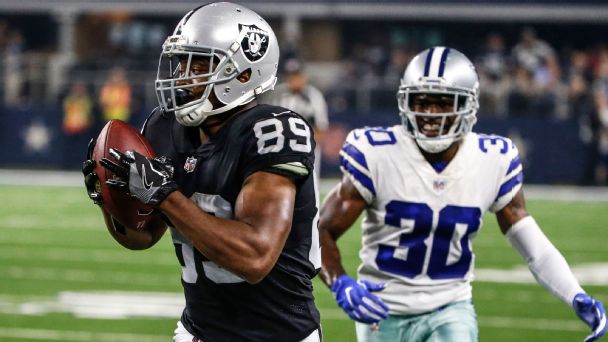 We're tracking every deal since training camp, with analysis and highlights from our team of NFL reporters. Trade tracker »
More NFL coverage »

With the NFL’s trade deadline set for next Tuesday, teams might as well submit their best offers to the Giants. Just about any veteran with a movable contract is believed to be available. Note: That does not include star wide receiver Odell Beckham Jr., who signed an extension potentially worth $95 million this summer.

Defensive end Olivier Vernon and cornerback Janoris Jenkins are viable candidates to be dangled. Safety Landon Collins and linebacker B.J. Goodson are other names that could draw interest. For the right price, Gettleman (who is known to be aggressive) might just pull the trigger.

The goal now for the Giants is to add draft capital and shed salary for the future. They’ve already added three picks in the past two days, with more likely to come. They should land a high pick on their own, with talent being pushed out the door and nine games remaining on the schedule.

The main question is: “What do they do with their quarterback?” Manning doesn’t fit the rebuild approach and wouldn't be easily traded. At the very least, he’s likely to give way to rookie Kyle Lauletta sometime in the second half of this season.

It’s all necessary, given the current state of the franchise. The Giants' future is muddled at best. They have a bevy of weapons but no quarterback to build around for the future. That’s a pretty important missing piece, and it must be priority No. 1 this offseason. The Giants also have to rebuild their offensive line.

It isn't as if they haven’t tried to fix the line. It’s just not that easy and might need a long-term view. The previous regime spent high draft picks and signed notable free agents in an attempt to fix the problem. It didn’t work.

Gettleman spent a lot of money this offseason signing left tackle Nate Solder and guard Patrick Omameh in addition to drafting guard Will Hernandez in the second round. That was supposed to be 60 percent of the Giants’ starting offensive line solidified. It didn’t work either.

Omameh has already been benched, and Solder has experienced his ups and downs, even if he was an upgrade from Ereck Flowers, another former first-round pick recently exiled from the Giants' roster. Flowers was waived several weeks ago after beginning the season as the team’s starting right tackle.

All of this has led to a team in current and future flux. It has led to a team finally conceding to a rebuild. The Giants don’t even need to admit that it is in motion. Their results and actions do it for them.