Daniel Jones' curiosity got the best of him earlier this year. He knew Joe Judge was the New York Giants' new coach and former Dallas Cowboys coach Jason Garrett was now the Giants' offensive coordinator. It got the second-year quarterback thinking, perhaps even dreaming, of the possibilities.

But NFL rules prohibited Jones from getting his hands on the Giants' playbook until mid-April. The collective bargaining agreement forbids new coaches from talking football with players until the start of the offseason workout program. This year, the coronavirus pandemic pushed that timeline to April 20. 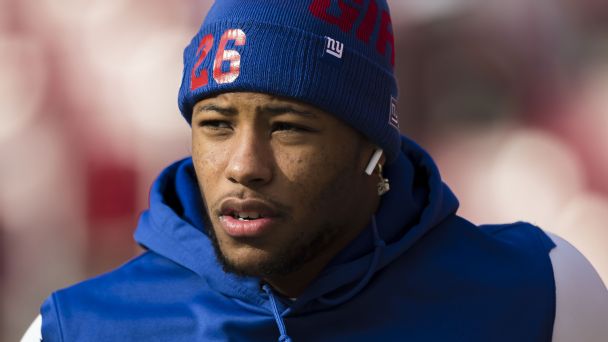 That didn't stop Jones from getting started early, because he had an idea that the Giants' offense would strongly resemble what Garrett did all those years in Dallas, where he had been the offensive coordinator or head coach from 2007 through 2019.

So, Jones had a conversation with former Cowboys quarterback Tony Romo. He also studied some tape of Garrett's Dallas games.

"I certainly did that, diving into some of the Cowboys' stuff and what they had done in the past," Jones said Wednesday during a conference call with reporters, the first time he has spoken publicly since the start of the Giants' offseason workout program. "The rules make it tough to communicate a whole lot about that stuff, so there's a little bit of patience involved in that and getting to the point where we could get the playbook and kind of understand some of the concepts and get some of the verbiage. I did my best to be prepared for when I could get my hands on that stuff."

Sources have told ESPN that the Giants' running game will have more pulling linemen and misdirection, and the passing game will rely on timing patterns.

What the Giants players are seeing offensively is a spinoff of the Cowboys' former scheme, Judge confirmed. And that's not necessarily a bad way to go. Dallas finished first in total offense last season, averaging 431.5 yards per game. The Cowboys' offense led the league averaging 6.5 yards per play.

This is what the Giants are inheriting.

"I think schematically, the easiest way to describe it to the outside world right now is it's going to be similarly based off what Jason's done in Dallas over the last 10 or so years," Judge said. "There are going to be some similarities carried over from that, but it has to cater to our players we have on our roster currently."

Jones will play the role of Romo or Dak Prescott. Saquon Barkley is the Giants' Ezekiel Elliott. They are the Giants' centerpieces of what Garrett has to work with now. Tight end Evan Engram and wide receivers Sterling Shepard, Golden Tate and Darius Slayton are his other dynamic chess pieces. That should be enough to prop up an improved offensive line.

The system will be different for Jones & Co. Former Giants coach Pat Shurmur relied more on traditional play-action passes than misdirection the previous two seasons. The running game was more inside zone than anything else.

Garrett ran Elliott to the outside much more than the Giants did Barkley. Elliott had 17 more interior rushes the past two years than Barkley, according to NFL Next Gen Stats data. That pales in comparison to the 121 more carries Elliott had outside the tackle box.

This was a product of the offenses. That gap is sure to decrease -- if not completely evaporate -- this season. The goal will be to get Barkley into space, where he can best put his power and speed to use.

Barkley considers himself a student of the game. He watches most of the league's top running backs, and some legends from the past. He knows what makes Elliott successful. The plan is to pick his brain at some point.

"I actually haven't contacted Zeke yet. That's something that I do plan on doing," Barkley said. "I kind of want to dissect it and get the system down myself and then get to Zeke and see what he was doing here, what he was doing there, because it's kind of like with anything. Obviously there [is] some basic stuff that you learn and the big stuff that you've got to be able to do, but at the end of the day, there's some stuff that you've got to do as a football player and become great and use your creativity. I'll definitely use him and try to learn from him to see what he was able to do."

Jones says he plans to talk more with Romo in an effort to lean on the Cowboys' past to supplement the Giants' future.

The Giants' offense, centered on Jones and Barkley, will have elements of what Garrett learned from the "Air Coryell" offenses (explosive plays through the air), as well as from his time working under Norv Turner and Ernie Zampese, and even Nick Saban with the Miami Dolphins.

Judge said he recognizes some of Garrett's playbook verbiage from his time with Saban in Alabama. But the terminology is all new to Jones, who views it as the biggest difference in offenses.

"There are going to be some similarities with Daniel, but I would not say it's a carryover in any way, shape or form from his rookie year," Judge said.