EAST RUTHERFORD, N.J. -- Quarterback Daniel Jones didn't play at Seattle in Week 13, but he came closer than even the New York Giants expected at the beginning of last week.

Barring a setback, Jones is expected back from a hamstring injury this week when the Giants host the Arizona Cardinals (1 p.m. ET, Fox), according to a source close to the quarterback. That's big for the NFC East leading Giants (5-7) with the Washington Football Team (5-7) breathing down their necks. 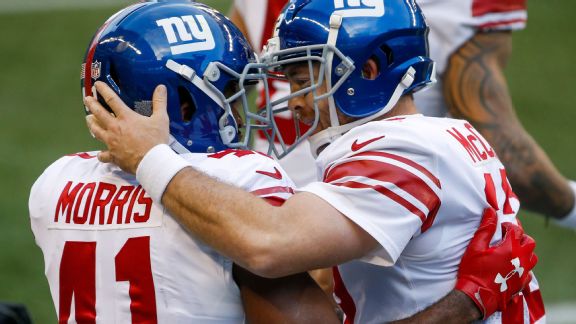 Jones will need to pass through some checkpoints, which includes proving to the team's decision-makers he is ready. It will begin Wednesday when the Giants have little more than a walk-through in preparation for the Cardinals.

"We're going to give him every opportunity to go on the practice field this week and show that he can defend himself on the field properly," Giants coach Joe Judge said. "If that's the case, then we obviously want him to play. But we're going to make sure we do the right thing by him.

"Look, I had to make the decision [Sunday at Seattle] to go ahead and hold him out. He was a little disappointed because he's a competitive guy. But we have Wednesday, Thursday and Friday to get on the field. We'll see how he looks in there, and we'll make the best decision for him going forward."

Jones almost made it back for the stunning victory over the Seattle Seahawks. He wasn't ruled out until after coaches met with the quarterback on Sunday morning. Until then, the Giants were holding out hope Jones could at least be active, potentially even as the backup or emergency option.

But Judge decided it was in the quarterback and team's best interest to keep their starter on the sideline in street clothes, and start veteran Colt McCoy.

"I had to kind of protect him from himself [Sunday]," Judge said of Jones after the game. "I didn't want to put him in a position where I wasn't 100% certain that he couldn't defend himself on every single play."

Jones didn't practice early last week, but Judge watched him drop back and throw for an extended period of time on Thursday. He was impressed with the way Jones moved. The QB then snuck in a little practice time on Friday and prepared alongside McCoy as if he was going to play. But they all knew the reality, and Jones was listed as doubtful.

"DJ communicated with me pretty well all week long," McCoy said after completing 13-of-22 passes for 105 yards with a touchdown and interception. "He kind of knew it would be a long shot for him."

McCoy was serviceable on Sunday, but the offense doesn't have the same big-play ability with him at the helm. He threw one pass longer than 20 yards; it was his final one, and it came up short, falling incomplete to Sterling Shepard.

The Giants haven't thrown the ball deep often, but Jones is completing an NFL-best 57.7% of his deep throws. Four have accounted for touchdowns. They would like to have that threat Sunday against the Cardinals (6-6), a team that can put up points.

It's only going to be possible if Jones can move efficiently, and that's what Judge and the Giants will determine this week.

"When there's pressure in the pocket, can he sidestep, can he step up? If he has to leave the pocket and scramble, if there's a gap open for him to go ahead and tuck that ball and run to get a first down, are these things we're OK with him doing and we're confident that he's going to go out there and do it without getting hurt worse," Judge said.

"We talk about defending himself, I want to make sure that when his natural instincts kick in as a player, that he's not limited somehow physically or someone has an advantage over him on the field. That's just not fair for us to do. ... [if] he's just a sitting duck."