EAST RUTHERFORD, N.J. -- It was early last season in the most unusual of years. For weeks, months even, Tae Crowder sat spaced 6 feet apart from his fellow New York Giants linebackers with his face hidden behind a mask. He rarely participated in any casual chats, opening himself up to his teammates.

Crowder was too focused on the task at hand and making sure not to let this opportunity go to waste. He was a rookie, the 255th and final pick of the 2020 NFL draft, out of the University of Georgia. He decided to let the T-shirts or hoodies he wore -- emblazoned with "irrelevant" or "I am Mr. Irrelevant" -- do the talking.

Eventually, Crowder let down his guard and became more vocal, according to fellow linebacker Blake Martinez. But not before fully embracing the Mr. Irrelevant tag that came with being the last pick of the draft.

"It was really funny because Mr. Irrelevant was actually a thing," Crowder said. "And this is how my whole process has been -- just being an underdog and all that and having to overcome a lot of obstacles and get where I wanted to be.

"But it was great to get in that [Mr. Irrelevant] lane and embrace it. I loved it. I still do love it."

There is the Mr. Irrelevant merch as proof. And Crowder isn't too shy to mention the watch, trophy and gear sent from the people at Irrelevant Week that he keeps prominently displayed in his New Jersey apartment. He even has the label prominent in his Instagram bio. But he does regret missing out on the banquet and trip to Disneyland that traditionally comes with the honor; the coronavirus pandemic made that impossible.

Crowder says people still throw the Mr. Irrelevant tag out there with regularity. Friends, family, outsiders, it hardly matters. "Mr. Irrelevant, what's up?" is not an uncommon greeting. 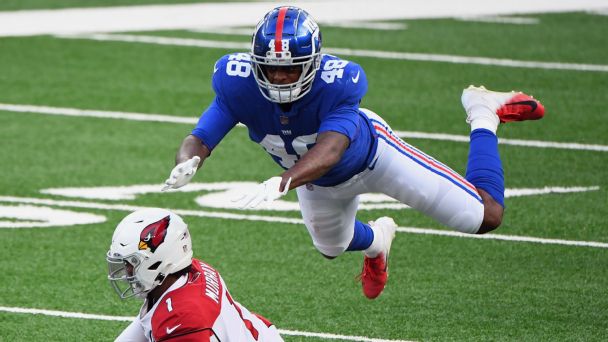 And that is just fine. This is now part of Crowder's story: "It's my title now."

And it's one he is going to use to his advantage as long as he continues to do his part on the field. His promising rookie season was a step in the right direction despite it being the self-proclaimed country boy's first time being in New York and New Jersey.

"There are ways to market it and maybe turn it around to be 'Mr. Irrelevant in the past, Mr. Relevant today,'" said Crowder's agent, Team IFA president Blake Baratz. "As he continues to make a name for himself, plays good football and makes the roster and becomes a leader on that young defense. I don't think that [label] will leave him any time soon. He'll use that in a plethora of ways if we can."

The Mr. Irrelevant tag is already plastered on three street signs honoring Crowder around his hometown of Pine Mountain, a town in Western Georgia with a population of a little more than 1,400 residents. It's also an indelible line on a résumé he hopes will one day prove the other 31 teams and 254 picks wrong.

Crowder played in 11 games with six starts as a rookie. It would have been more if not for a midseason hamstring problem that landed him on injured reserve. He finished with 34 tackles (three for a loss) with a sack, three quarterback hits and a fumble recovery that went for the game-winning touchdown against the Washington Football Team in the Giants' first win of the season in Week 6.

There was a point early in the season when Martinez remembers telling defensive coordinator Patrick Graham they needed to put Crowder in "way more." When it happened, the seventh-round pick flourished and came into his own, on and off the field.

He has positioned himself to potentially start (or at least play a significant role) this season. Not that he views it that way. He still seems to think of himself as the two-star recruit who was the last pick in the 2020 draft.

Crowder was a running back at Georgia until midway through the 2016 season. He was stuck behind Nick Chubb (Cleveland Browns) and Sony Michel (New England Patriots) -- both top 35 picks in their respective drafts -- on the depth chart until Bulldogs coach Kirby Smart called him in for a meeting. Crowder said he was told he was doing so well on the scout team that Smart wanted to find a way to get him on the field. That started his new career as a linebacker.

Four years later he was an NFL prospect, but without an invite to the league's scouting combine. The pandemic stripped him of a pro day and also forced the cancellation of several pre-draft visits.

It's believed this hurt his status. Instead of working himself into a potential fourth or fifth-round pick, a possibility given the heavy interest from teams, Crowder had to wait until the final pick.

"It is my motivation every day," he said. "Having to go from running back to linebacker in college, to having to prove myself at linebacker and try out. I'm embracing the whole process."

It's a message Crowder intends to pass along to the next in a long line of Mr. Irrelevants, most of whom never get to start or make an impact in the NFL. Kicker Ryan Succop, pick No. 256 by the Kansas City Chiefs in 2009 and and fullback Jim Finn, who played for the Giants from 2003 to 2007 after being drafted by the Chicago Bears at No. 253 in 1999, are two of the more successful final picks.

The Tampa Bay Buccaneers hold the final pick (No. 259) entering this year's draft, and Crowder said he will be watching closely on Saturday to see who is this year's Mr. Irrelevant.

After all, he's a proud member of the club.