1. He said, he said: Talk about contrasting takes.

On the same day CEO Christopher Johnson said the drafting of Sam Darnold will be remembered 20 years from now as "the moment the Jets shifted into a new gear, that they became a great team," OT Kelvin Beachum offered the perspective of a grizzled veteran who wants to see the kid perform before he canonizes him.

"Man, you know, I'm one of those guys, until you get hit in the mouth, I don't know what you got yet," Beachum said. "And he hasn't been hit in the mouth by an NFL defensive lineman. So when that time comes, we'll see." 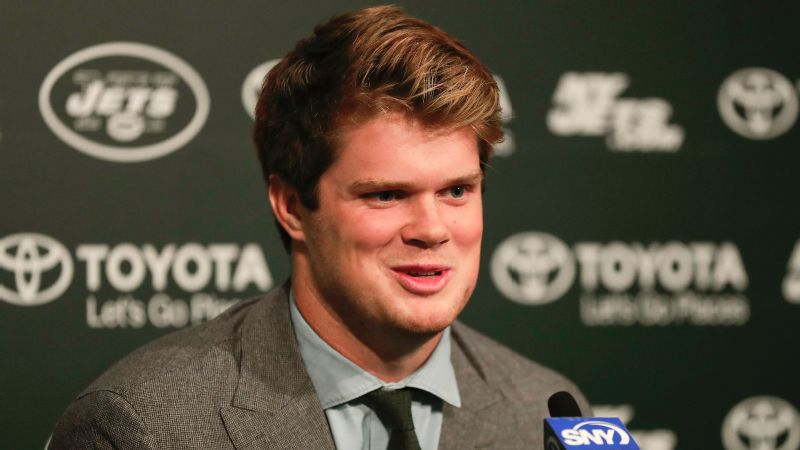 The Giants are a flagship franchise. But the opportunity to win the Jets' first ring in 50 years is a lot greater than being Eli Manning's successor, writes Ian O'Connor.

• What Sam Darnold must fix to become the Jets' QB savior »

• How the Jets fell head over heels for Sam Darnold, then agonized »

There's nothing wrong with either opinion, but hearing both viewpoints triggered a question: Could the Jets be headed for a quarterback controversy?

That's a loaded question, to be sure, but it can't be overlooked. Incumbent Josh McCown, widely respected in the locker room, will be replaced at some point. It's inevitable. How that switch is handled -- the timing, the circumstances, etc. -- will be critical.

The Jets have two things working in their favor: McCown is the ultimate team guy and won't make a stink. Coach Todd Bowles doesn't have a quick hook. If anything, his hook is too slow. Remember, he was prepared to go the distance last season with McCown over his young quarterbacks even though the team was hopelessly out of playoff contention. He turned to Bryce Petty only after McCown's season-ending hand injury.

This is a different deal because Darnold, drafted third overall, must play -- and will play. The best-case scenario is for Darnold to show everyone -- even the McCown supporters -- he's the best quarterback on the team. That would make for a seamless transition. Otherwise, it could get a bit bumpy, especially if Teddy Bridgewater (can't forget about him) makes a run for the job.

2. Four! At this point, it would be an upset if the Jets don't bring four quarterbacks to training camp. That means another Summer of Hack. Speaking of Christian Hackenberg, his revamped throwing motion features a shorter, more compact delivery than before, I'm told. He decided to rebuild his motion with the help of a personal QB coach.

3. Checking in with D Lee: In a radio interview with ESPN 98.7, Darron Lee referred to himself as the "Mike" linebacker. Is the former first-round pick being groomed to replace Demario Davis at the all-important middle linebacker position? Uh, not exactly.

I can say with great certainty that free-agent addition Avery Williamson is slated to be in the middle, with Lee staying at the weak inside spot. Chances are, Lee is getting some informal reps in the middle. After all, 'tis the season for experimenting.

Lee made a couple of other interesting comments:

Incredibly, the Jets haven't scored on defense since Oct. 20, 2013, when Antonio Allen returned an interception for a touchdown against Tom Brady. Since then, they've gone a league-high 73 games without a defensive touchdown.

4. No comps for you: The window for compensatory free agents closed this week, meaning the compensatory picks for the 2019 draft can be projected with a high degree of accuracy. The Jets aren't due to receive any comp picks, according to overthecap.com.

5. Ground and pound: Beachum said the offensive line's goal is to be a top-10 rushing team. Is that feasible? Sure, but it'll take some work. The Jets finished 19th last season, but it sounds as if there will be a greater emphasis on the running game. They have a new line coach, Rick Dennison, who also has the title of run game coordinator. The scheme will feature outside zone runs -- aka stretch plays.

6. Forget the diet: Defensive end Henry Anderson dropped 15 to 20 pounds this offseason because he thought he'd be playing in the Indianapolis Colts' new 4-3 scheme, which requires more quickness than a 3-4 front. Anderson, usually 300 pounds, was so serious about it that he hired a nutritionist.

Now he needs to go in the other direction. He was traded to the Jets during the draft, which means it's back to a 3-4. Bowles likes his linemen in the 300-to-310-pound range, so Anderson needs to develop a serious case of the munchies.

7. What pass rush? The Jets lost 44.5 career sacks when they sent Muhammad Wilkerson packing, leaving only 30.5 sacks among the current defensive linemen. The situation is worse at outside linebacker, where they don't have a player with more than nine career sacks (David Bass). The chances of finding a decent pass-rusher at this late stage are remote, so yes, this will be a recurring issue throughout the season.

Bowles said there's "good competition" among the pass-rushers, adding, "But, obviously, we need better production from everybody up front from a sack standpoint. But it's not about sacks -- it's about disrupting the quarterback, and we've got good competition there. We have guys we think are capable."

Maybe general manager Mike Maccagnan, who did a terrific job of putting the team in position to draft Darnold, can pull off an end-of-summer trade, the way he did last year for wide receiver Jermaine Kearse.

8. The last word: "I'm hoping he's that franchise quarterback the Jets have been looking for. It's hard to go too far in the NFL without that franchise-like quarterback, and I'm hoping Sam Darnold is that for the Jets." -- Curtis Martin, Hall of Fame running back