"If the kid is ready, play him," the former New York Jets coach said Tuesday. "Why would you stunt his growth?"

The kid, of course, is Sam Darnold, only 21 years old and fabulously wealthy -- the perceived savior of a franchise that hasn't been to a Super Bowl in 50 years. Now that he's under contract, with a $20 million signing bonus in the bank, his development in the next few weeks will be one of the top storylines in the NFL. At some point in the preseason, coach Todd Bowles will have to determine whether Darnold is ready to lead the team.

Start the future now, or let him season on the bench?

In 2009, Ryan faced the same decision with rookie Mark Sanchez, who, like Darnold, was a first-round pick out of USC. Ryan named Sanchez his opening-day starter, and he suspects Bowles will do the same with Darnold.

"I have a feeling the rookie will start, in my opinion, from Day 1," Ryan said. "I would be shocked if he doesn't start."

The decision has many layers. Darnold's competition (Josh McCown and Teddy Bridgewater) is better than what Sanchez faced (Kellen Clemens), but some people at One Jets Drive believe Darnold will leapfrog the veterans as soon as he proves he's ready. Of course, it's not always a black-and-white answer when evaluating young quarterbacks. Sometimes it's just a gut feeling.

"I think he has a chance to make a transcendent impact," said former NFL quarterback-turned-analyst Dan Orlovsky, who has studied Darnold closely on tape.

That's a strong opinion, but Orlovsky believes Darnold has rare attributes for the position. He described the former USC star as an unconventional quarterback because of his innate ability to make plays the way they're not drawn up.

"I call it magical sloppiness, where he's just got this unique trait that I think he was born with and developed playing all kind of sports," Orlovsky said. "He can just make some things happen with his body and with his arm angles. You can't drill that stuff."

Darnold isn't a textbook quarterback. His throwing motion includes a noticeable hitch and sometimes his feet are pointed this way and that way when he delivers the ball. He's "a little sloppy with everything, even the good stuff," Orlovsky said. But his arm is strong and accurate, and he has a terrific feel for judging angles and the way receivers run their routes, according to Orlovsky.

Ryan likes Darnold's upside and loves his intangibles, but he wonders if the hitch in his motion will be an issue on the NFL level.

"The only thing I didn't like about him in college was his mechanics," he said. "I think he's a slow-deliver guy and that scares me in this league. A lot of guys will say, 'Yeah, but we can coach that out.' Bulls---."

"All three are decent quarterbacks, but [Josh] McCown has been a journeyman his whole life. What are you going to get there? I mean, forget it. That's out. I mean, it's [Teddy] Bridgewater or the rookie. If he has a good preseason, why not start the rookie?" 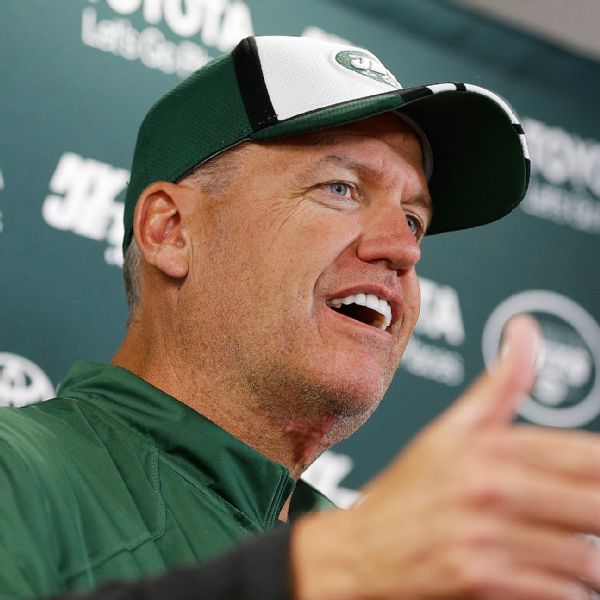 Orlovsky doesn't think Darnold's hitch will be a major factor.

"Could it hurt him? Yes. Do I think it will? No," he said. "Here are my reasons why: When USC did a lot of their quick-game stuff, I was really impressed. When that ball needs to get out, it gets out. The motion is unique, but the ball, timing-wise, is just as quick as any other guy coming out. The ball gets out fast. He’s got that quick-twitch wrist flick."

Stylistically, Darnold isn't a paint-by-numbers quarterback. He improvises. Sometimes he goes outside the lines (13 interceptions in 14 games last season), but many times the result is a masterpiece. Many quarterbacks can't play that way; they're robots whose brains lock up as soon as something breaks down. Well, guess what? More often than not, something is breaking down in an NFL pocket. Darnold's ability to play off-script, experts say, will expedite his ascent to the starting lineup.

So will the Jets' offensive scheme.

New offensive coordinator Jeremy Bates is installing the old Mike Shanahan system -- a version of the West Coast offense, which is designed to reduce the mental burden on the quarterback. Those who played in the system believe it's ideal for an inexperienced quarterback.

"They don’t ask a lot out of their quarterbacks, intellectually, at the line of scrimmage," said Orlovsky, who played in the system. "People use the term 'quarterback-friendly.' There’s not a ton of pre-snap [responsibilities]. They put a lot of burden on the offensive line."

Example: The system has built-in answers when it comes to protection schemes. It's up to the linemen and backs to anticipate blitzes, adjusting on the fly based on the number of pass-rushers and where they're coming from. The system, Orlovsky said, doesn't rely heavily on audibles, but rather "check-with-me" calls -- and they suspect they will be a big part of the Jets' running game. A "check-with-me" is when two plays are called in the huddle, and the quarterback picks one at the line of scrimmage based on the defensive look.

So back to the original question: Can Darnold be the Jets' Week 1 starter?

"I wouldn't say I'd be shocked, but I'd be surprised a little bit because I have so much respect for Josh McCown," said former NFL player Matt Bowen, an ESPN analyst. "If I were the coach, Sam would have to jump out every day on the practice field. There would have do be so many traits showing that, even with his inexperience, you say, 'Look, we have to put him on the field; he gives us the best chance to win.' If you don't see it, that's fine because I know I have a veteran quarterback."

Darnold is relatively green, having started only 22 games in college. Some expect growing pains when it comes to reading NFL defenses. Ryan, who made a living confusing quarterbacks, doesn't think it will be a problem for Darnold. He said it's easier for young quarterbacks because pass coverages aren't as sophisticated as they used to be, especially on first and second down.

"Why wouldn't you start him?" Ryan asked. "All three are decent quarterbacks, but McCown has been a journeyman his whole life. What are you going to get there? I mean, forget it. That's out. I mean, it's Bridgewater or the rookie. If he has a good preseason, why not start the rookie?"