Pete Carroll couldn't win here. Bill Belichick didn't even want to try. Herm Edwards restored pride in the franchise, then got himself traded. Eric Mangini was the "Man-genius," which landed him a cameo on "The Sopranos" -- and then he got whacked in the middle of the night by his best friend, former general manager Mike Tannenbaum. Rex Ryan almost made the Super Bowl -- twice! -- but his winning touch disappeared faster than his waistline.

And now there's another coach on the New York Jets' scrap heap -- Todd Bowles, who was fired Sunday night after another terrible season. He was a solid hire in 2015, a smart defensive coach with the right pedigree, but he imploded like no Jets coach since Rich Kotite in the mid-1990s. Bowles' final record: 24-40. The man lost 21 of his last 27 games. It's indefensible. 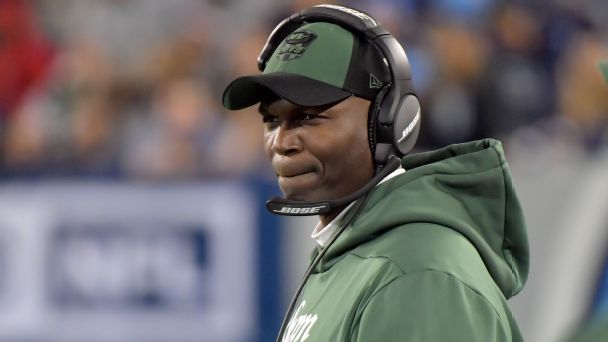 • Jets fire Bowles after four seasons
• Sizing up the Jets' coach candidates
• Next coach must make Darnold a star
• Do Johnson, Maccagnan have savvy?
• Why McCarthy should be candidate
• Background on offense a must-have

What is it with the Jets? They take promising football coaches, put them into a vice and use the power of a half-century of futility to squeeze the life and smarts out of them. It's one of the toughest jobs in sports, so daunting that it scared away Belichick. In retrospect, his first "genius" move was fleeing this wayward franchise, which has spent decade after decade searching for that elusive trifecta -- sound ownership, management and coaching.

The Jets haven't reached a Super Bowl in 50 years. Only the Detroit Lions have a longer continuous run of futility. That doesn't happen by accident.

For the love of Pete (Carroll), the Jets should use their latest failure -- and those who preceded Bowles -- to help them in their coaching search. It will take a special coach and person to empty the skeletons out of the closest. What they really need is a Bill Parcells-like persona who can shop for the groceries, cook the meals and rule the kitchen with the confidence of Gordon Ramsay. Unfortunately, Parcells is 77 and there are no young and available Tunas on the NFL horizon.

They need someone with a strong personality. A big part of this job -- any head-coaching job, for that matter -- is presentation. A coach has to sell himself and his program to the public, and that wasn't one of Bowles' strengths. He could be engaging away from the cameras and microphones, but he never let that side show in public. He was nothing like his mentors, Bruce Arians and Parcells, meaning he said little and showed no emotion. The job demands an "it" factor, especially in a market such as New York. They need a culture-changing presence, someone who isn't intimidated by the Super Bowl drought and the stigma attached to it.

They need an offensive-minded coach. Enough with the defensive coaches, already. The last head coach with an offense background was Kotite, and he went 4-28 in two seasons. He was followed by Parcells, a defensive guy who brought a CEO-type quality to the job. After him, they hired the same guy over and over -- five defensive assistants with no NFL head-coaching experience.

Now, more than ever, the position screams for offense. The NFL is an offense-driven league, and the Jets have a young quarterback, in Sam Darnold, who needs to be developed by a coach who sees the game from that side of the ball. One of Bowles' shortcomings was that he never figured out how to run an offense. He went through three offensive coordinators and five quarterbacks in four years, a lack of continuity that stunted the growth of the whole team.

It wasn't all his fault because it was hard to attract top-flight coordinators without a promising quarterback (pre-Darnold), but which brings us back to the earlier premise: Coaches can't succeed unless management supplies talent, and this is a front office that once believed Christian Hackenberg was a legitimate prospect when the rest of the league knew otherwise. Bowles recognized Hackenberg couldn't play, the reason why he famously kept him on the bench even when the front office was pushing for the kid to play at the end of the 2017 season.

They also need to hire a compatible coach-GM tandem. Ownership decided to keep general manager Mike Maccagnan, essentially blaming Bowles for the disaster. They were hired on the same day in 2015, presenting a united front as a couple of Jersey guys with similar football philosophy. In reality they were strangers, joined together in an arranged marriage. That almost never works.

They had some good moments (remember the almost-playoff run in 2015?), but they grew distant this season, sources said.

Bowles felt he didn't have the roster to win, and it bothered him when Maccagnan stood pat at the trading deadline, according to sources. It also chafed some people in the organization when Maccagnan, in his midseason media availability, waxed optimistically about the future, promising to be active in 2019 free agency. Some interpreted that as him kissing off the 2018 season and selling his rebuilding plan in an attempt at self-preservation.

It's firing-and-hiring season, and we're tracking all the moves.
• Everything to know about openings »
• The hottest NFL coaching candidates »

At the same time, Bowles' inability to close out games infuriated factions in the organization. The Jets went 1-6 in games decided by eight or fewer points, often imploding in spectacular fashion. It prompted some at One Jets Drive to wonder: If the team was talent-poor, as many outside the building suggested, how come it was able to compete for three-plus quarters before unraveling? They put that on Bowles and the coaching staff, which was slow with in-game adjustments.

Truth be told, there was a disconnect between the coaching staff and the personnel department. One source said there were times when the coaches didn't know when players were being elevated to the 53-man roster. This wasn't as toxic as the ill-fated Ryan-John Idzik pairing in 2013-2014 -- another shotgun marriage that went bad -- but communication was an issue.

One time, Bowles found out from a reporter in a news conference the team had traded for cornerback Rashard Robinson. In some ways it summarized the Bowles-Maccagnan relationship. Not only did it turn out to be a bad trade, but it showed the coaches and personnel department weren't always in lockstep.

Now there's a new coaching search, another opportunity for this moribund franchise to change direction. Will the leaders get it right or will they continue to sabotage themselves by making the same mistakes and expecting a better result? That, as you know, is the definition of insanity.