The New York Jets' mission, general manager Joe Douglas has stated many times in recent months, is to maximize Sam Darnold's potential by improving his supporting cast. For the most part, they have. If the Jets really want to help their young quarterback, they will figure out a way to get more production out of running back Le'Veon Bell, whose first season in New York was historically poor.

Coach Adam Gase has a plan. It involves a scheme adjustment and a "less is more" approach to Bell's usage. In an interview with ESPN's "Flight Deck" podcast, Gase hinted he might try to incorporate more backs into the rotation in 2020. 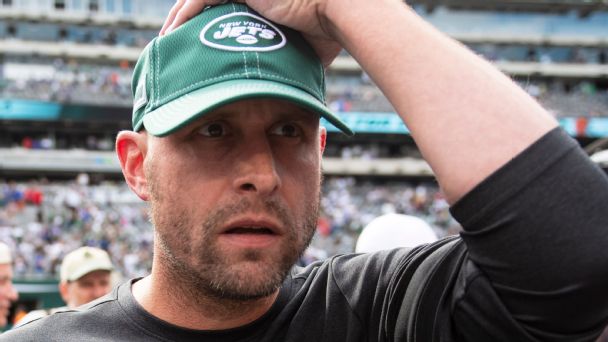 "I do think we have some guys that can help maybe lessen the load on [Bell] to where it's not all on him," Gase said. "Hopefully, we can get some of the younger backs to where we can make a good one-two punch to where we can really excel instead of feeling like it's just all on him all the time."

Though Bell didn't get as many touches as he did with the Pittsburgh Steelers, he was a workhorse for the Jets -- a combined 311 rushes and receptions, eighth in the NFL. The next-closest running back on the team was Bilal Powell (66 combined).

Bell, 28, got the ball a lot, and he liked it that way because he sees himself as a volume runner who can wear down a defense. How would he react to fewer touches? He would probably say he's cool with it -- here comes the qualifier -- as long as the team is winning. Hello, slippery slope.

The Jets are paying him $13.5 million this season, fully guaranteed, so it would be ridiculous to make him a rotational back. To be clear, Gase wasn't saying that at all; he said they could "lessen the load" on Bell by mixing in others.

But, what others? They don't have a clear-cut No. 2 back, especially with Powell in free-agent limbo. Kenneth Dixon (715 career rushing yards), Josh Adams (523) and rookie La'Mical Perine (fourth-round pick, 2020 draft) are the top backups.

Bottom line: Undermined by a poor and unstable offensive line, Bell averaged 3.2 yards per carry -- the worst in franchise history (minimum: 175 carries). He might have lost a half-step, which happens to all running backs after a few years, but he's definitely better than 3.2.

The Jets could have four new starters on the line, which should help. Gase believes the overall construction of the offense will yield more efficiency from Bell.

"If you have the vertical threats like I think we're going to have with the wide receivers now, hey, maybe we'll start seeing two-high zone instead of them just focusing on one guy in the receiving corps," said Gase, alluding to the additions of speedsters Breshad Perriman and rookie Denzel Mims (second round).

"You've got [tight end] Chris Herndon back. You've got [tight end] Ryan Griffin. You've got some guys who can do some different things there and stretch the field vertically. That was something Chris was really good at. Now, all of a sudden, Le'Veon is seeing lighter boxes, which he didn't see a lot last year. We saw loaded boxes for the most part. We didn't do a good enough job winning in the passing game to open some of that stuff up."

A loaded box is when there are more defenders than blockers. Bell, in fact, saw a loaded box on 36.3% of his runs -- the seventh-highest percentage among 29 ball carriers (minimum 150 rushes), according to NFL Next Gen Stats. In his final season with the Steelers, the number was a league-low 24%.

"When you're a running back and you're constantly seeing seven-, eight-man boxes, that can be frustrating," Gase said.

Gase said last season was a "big-time learning experience," adding that his goal is to "emphasize what [Bell] does extremely well and get him the ball in those situations."

In Bell's last great season (2016), he ran well out of every formation -- shotgun, I-formation, single-back with the quarterback under center, you name it. It's Gase's job to figure out what Bell does best for the Jets. He said he's digging into Bell's old Pittsburgh tape to look for answers, which is fine -- except it sounds a lot like what he said before last season.

Gase also revealed that he is planning to use more outside-zone runs than last season -- i.e., stretch plays. With the additions of George Fant and first-round pick Mekhi Becton at tackle, the Jets have improved their athletic ability on the offensive line, conducive to a zone scheme. He said it's "something we're really looking to get back to. We probably went away from it a little bit last year -- quite a bit. We're looking to make that more of a staple for ourselves."

Bell certainly has the patience and vision for an outside-zone scheme, but he's not a classic, one-cut runner -- the style that works best on stretch plays. He's at his best when going downhill.

It should be another fascinating season for the Jets and Bell.