On June 7, 2019, the New York Jets capped a tumultuous offseason by hiring former Philadelphia Eagles executive Joe Douglas as their general manager. They gave him a six-year contract -- a bold commitment for a first-time GM. Their message was clear:

The Jets needed saving. Still do. This is a franchise that hasn't made the playoffs since 2010 and hasn't posted a winning season since 2015. Since then, the Jets are 21-43. The only team with a worse record is the Cleveland Browns (14-49-1).

Exactly one year into the gig, Douglas looks and sounds like a man with a plan. It's hard to assign a specific grade because we still haven't seen his 2020 draft picks or key free-agent additions on the field, but it's clear he has a vision for the team -- and that's a big part of the battle.

A quick review of his first year:

He restored calm and credibility. The Jets became a laughingstock for firing GM Mike Maccagnan three weeks after the 2019 draft. Maccagnan and newly hired coach Adam Gase splintered faster than a dead twig, plunging the organization into turmoil.

Douglas walked into a tough situation, but he galvanized the building with his unpretentious personality and blue-collar work ethic. Support from Gase, who endorsed Douglas' hire, helped the transition. The front office/coaching staff relationship is stronger than it was under Maccagnan and former coach Todd Bowles. The "watch-your-back" mentality that existed in previous regimes appears to be gone.

Douglas also surrounded himself with lieutenants whom he knew from his past, creating cohesion in the front office. He brought in an outside voice, hiring Rex Hogan as assistant GM. Hogan was instrumental in a few of the Jets' trades.

He established a hard line at the bargaining table. For years, the Jets threw around crazy money, hoping to buy solutions to deep-rooted problems. More often than not, it backfired. Douglas changed that approach, refusing to pay more than his perceived value for a player. It cost him wide receiver Robby Anderson, who bolted as a free agent, but it allowed him to retain linebacker Jordan Jenkins and cornerback Brian Poole on team-friendly deals. 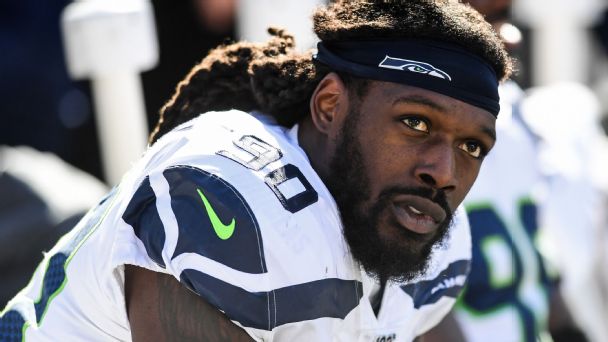 Look, every team overpays to some extent -- $9 million-a-year for right tackle George Fant raised eyebrows around the league -- but Douglas' business model should serve them well over the long haul.

He dared to think outside the box: After a 20-year cold war with the New England Patriots, Douglas made two (yes, two!) trades with the Jets' No. 1 nemesis. That might not seem like a big deal, but it showed he wasn't going to let preconceived notions stop him from doing business.

He attacked the No. 1 problem (with gusto): Douglas started talking about the offensive line at his introductory news conference. He made it a priority and he wound up spending 75% of his free-agent funds on the line. The cherry on top was tackle Mekhi Becton, whom he drafted 11th overall.

Douglas made it clear from the outset that strength in the trenches is the backbone to a successful team. It wasn't just lip service. Four of his acquisitions figure to be in the opening-day lineup: Becton, center Connor McGovern, right guard Greg Van Roten and Fant.

Best move: The Leonard Williams trade, executed at the NFL deadline last fall, was a prescient move. Douglas knew he didn't want to re-sign the defensive end, who was headed to free agency. Instead of losing him for nothing, he found a taker (hello, New York Giants) and received fair value -- a 2020 third-round choice and a 2021 fifth-rounder. With the third-rounder, he chose Ashtyn Davis, who could be the free safety of the future.

Worst move: Douglas wasted time and money (nearly $7 million) by coaxing center Ryan Kalil out of retirement. He took longer than expected to get in shape, never got comfortable in the scheme and suffered a season-ending injury midway through the season.

The lesson learned is that chemistry matters, especially on the offensive line. Another lesson: Sometimes the incumbent (in this case, Jonotthan Harrison) is better than an outsider with a fancy résumé.

The Jamal Adams situation: This could get ugly if not handled properly. It's incumbent upon Douglas to maintain an open line of communication with the All-Pro safety. They got their lines crossed last fall at the trading deadline, infuriating Adams. That might have been a rookie mistake by Douglas, who found himself engaged in trade talks after telling Adams he had no plans to deal him.

From the player perspective, Douglas has sent mixed messages this offseason, professing he wants to make Adams "a Jet for life" while dragging his feet in contract talks. From all indications, the Jets don't want to extend his deal until 2021, the final year. If that's the case, Douglas needs to be clear with Adams, a personality who could become a distraction if he feels as if he's getting jerked around.

It could be moot anyway if Adams is hellbent on getting a new deal by the start of the year. Douglas' resolve will be tested if Adams stages a training camp holdout and/or requests a trade.

Patch on the fly: Douglas improved the depth at a number of positions, but he's still thin at wide receiver -- really thin. Unless second-round pick Denzel Mims is a standout from the jump, the Jets will need another starting-caliber player. Get ready for a summer of trade rumors.

Distribution of resources: Only three of the top-10 cap charges for 2020 are players who were drafted by the Jets -- defensive tackle Quinnen Williams (seventh), quarterback Sam Darnold (eighth) and guard Brian Winters (10th), who is hanging by a thread. Though no fault of Douglas, who inherited a bad roster, this illustrates a dangerous imbalance. They're spending too much on outside players and not enough on their own, which highlights their poor drafting.

Douglas' challenge is to reverse the trend.