Good news for the New York Jets: For the first time in two decades, they don't have to face quarterback Tom Brady.

Now for the bad news: Kansas City's Patrick Mahomes and Seattle's Russell Wilson are on the schedule.

This will be a fascinating season for the Jets' defense, which overachieved in 2019 against a favorable schedule. They play six of the top 11 offenses from 2019 (based on total yards), which means they will be challenged in new ways by some of the best players in the sport.

Jets defensive coordinator Gregg Williams is a resourceful coach who knows how to utilize personnel based on matchups, but he's dealing with some obvious deficiencies. Once again, the Jets don't have a legitimate edge-rushing threat or a shutdown cornerback. He also might have a hole at safety, depending on how the Jamal Adams soap opera shakes out. It will be hard to improve last season's No. 7 ranking without their best defensive player.

After examining the Jets' offense on Tuesday, let's take a closer look at the defensive positions:

The story begins and ends with Williams, the "can't-miss" prospect who grinded through a pedestrian rookie season -- 2.5 sacks and six quarterback hits in 13 games. If he can reach his potential and become a consistently disruptive player on the inside, the defensive line -- heck, the entire defense -- will be raised a notch. The raw talent is there; that's why he was drafted No. 3 overall. Williams needs to be stronger and more instinctive at the point of attack than last season.

The rest of the group is solid. Keep an eye on Fatukasi, who is poised for a prominent role after making a big jump in his second season. It's a crucial season for Shepherd, a third-round disappointment from 2018. He needs a strong training camp to warrant his keep. The Jets also need a better year out of Anderson, whose production slipped last season, in part because of a shoulder injury.

Overall, this is one of the Jets' strongest positions. There's no reason they can't repeat as a top run defense. 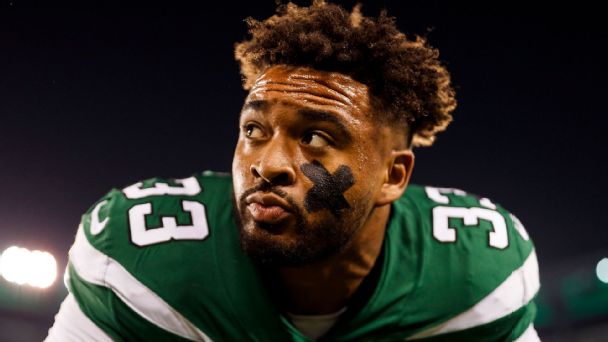 No one in this group scares the opposing quarterback, and that's a problem -- a perennial problem, as every Jets fan knows. General manager Joe Douglas has yet to adequately address the issue, leaving it up to a cast of largely unproven players. Douglas speaks highly of Jenkins, but money talks louder than words -- and his one-year, $3.8 million contract indicates the organization isn't sold on him as a long-term piece.

Jenkins and Basham project as the starting outside linebackers, but that's almost meaningless because Gregg Williams uses a myriad of fronts. It will be interesting to see what they get out of Zuniga, a third-round pick from Florida. Listed at 264 pounds, he projects as a defensive end. He produced when healthy, but injuries were a problem in college.

Once again, Williams will have to rely on blitzing. The Jets rushed five or more on 34% of passing downs, the sixth-highest rate in the league for 2019, per ESPN Stats & Information. Despite their efforts to affect the quarterback, they finished 21st in pressure percentage (26.5).

You're probably thinking, "Why not sign Jadeveon Clowney?" Unless Douglas has a change of heart, it's not going to happen. They don't want to blow a large amount of salary-cap space on a one-year player with injury questions and good, not great production.

So many storylines: Can Mosley can return to his pre-injury form? Will Williamson make the regular-season roster? Who will emerge as the starter alongside Mosley?

A healthy Mosley, who expects to be ready for training camp after surgery to repair a core-muscle injury that ruined his 2019 season, will make a huge difference in the middle of the defense. Those four Pro Bowls for the Baltimore Ravens didn't happen by accident.

Williamson, coming off knee surgery and entering the final year of his contract with an $8.5 million cap charge, could be trade bait. Frankly, it's a surprise he's still around, but the Jets could be slow-playing the situation to maximize his value. He might attract suitors if he proves in camp that he is healthy. The Jets have a glut of inside linebackers, with Onwuasor and Hewitt capable of starting next to Mosley.

Five of the six veterans on the roster are playing on one-year contracts, which pretty much summarizes the state of the position. It's a transition year, as the Jets move from the Johnson-Roberts disaster to open auditions for 2021. The position includes a cast of Indianapolis Colts castoffs (Desir, Wilson and Hairston), along with late-round/street free agents.

Translation: They don't have a legitimate CB1. The one certainty is Poole, who will start in the slot.

Desir is the best of the bunch and likely will claim one starting job in the outside. The other position is anybody's guess, but don't be surprised if Hall -- a fifth-round pick from Virginia -- plays his way into the conversation. He was on his way to becoming a top-50 draft pick before a serious ankle injury last fall caused his stock to plummet. For him, it's all about getting healthy.

Because of the cornerback problems, Williams played man coverage on 56% of third-down plays in 2019, down from his usual rate, per ESPN Stats & Information. If he can't find a couple of reliable "man" corners in this group, the 2020 coverage plan could be similar.

Adams' contract dispute will dominate the headlines in training camp. Will he get traded? Will he show up? If the All-Pro (signed through 2021) doesn't report for camp, he will be fined $40,000 per day and will lose an accrued season. The penalties might sound steep, but Adams is so frustrated by the lack of progress in talks that he formally requested a trade last week. Maye, too, is playing for a contract, as he will be a free agent in 2021.

If Adams and Maye get a fourth season together, they will need to generate more big plays. A combined six interceptions in three seasons isn't good enough. On the flip side, they complement each other nicely and provide stability in the secondary. Davis, an athletic third-round pick from Cal, could work his way into sub packages. Farley, another ex-Colt, is the top veteran reserve. Cioffi, a New Jersey product by way of the CFL, could surprise.