1. Empty cupboard: Even though the Jets' poor drafting record is well known, the trade of All-Pro safety Jamal Adams shined a particularly harsh light on the issue. And maybe, just maybe, it factored into Jets general manager Joe Douglas' decision to deal away his best player. Let's explain.

By trading Adams, drafted No. 6 overall in 2017, the Jets joined the Las Vegas Raiders as the only teams that don't have a single one of their first-round picks from 2011 through 2017 on their rosters, according to ESPN Stats & Information.

That factoid is more damning in the Jets' case because they made eight selections in that window, the Raiders five. 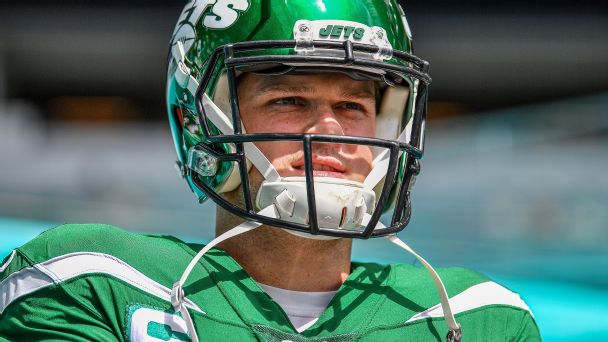 • Darnold is being extra cautious in camp
• Gase moving on from breakup with Adams
• Jets GM: Adams didn't talk way out of N.Y.
• Camp preview: Can Darnold improve?

A team doesn't have to consistently ace the first round to have success -- look no further than Adams' new team, the Seattle Seahawks -- but it's more the exception than the rule. The lifeblood of a team is, and always will be, the NFL draft. The Jets' failures are a big reason why they haven't made the playoffs since 2010, and the many misses are hampering the rebuild because the picks from the mid-2010s -- the players who should be the nucleus -- are nowhere to be found. Quarterback Sam Darnold (Class of '18) is the longest-tenured No. 1 pick on the roster, for crying out loud.

Douglas did not want to trade Adams -- he mulled Seattle's offer for weeks -- but the potential upside was too good to ignore. By acquiring first-round picks in 2021 and 2022, he gave himself four No. 1s in the next two drafts. The last time the Jets had this much draft capital in a one- or two-year span was 2000, when then-GM Bill Parcells made four first-round selections. After not having first-round picks in 1998 (swapped for Curtis Martin) and 1999 (Parcells compensation to the New England Patriots), he pulled off a franchise-altering draft.

This is Douglas' Parcells moment, spread over two years -- a chance to atone for the sins of his predecessors.

2. Did you know? Other than the Jets, the only other teams to part ways with at least eight first-round choices they picked from 2011 through 2017 are the Cleveland Browns (10 out of 12 picks) and Minnesota Vikings (eight out of 10), per ESPN Stats & Information.

3. History repeats: I hate to keep digging into the past, but I must say the Adams trade blockbuster reminds me of the Keyshawn Johnson trade in 2000.

Back then, the Jets dealt away a brash, charismatic, Pro Bowl talent who demanded a new contract and didn't get along with the coach (Al Groh). They received two No. 1s for Johnson and used a third-round pick to take another wide receiver, Laveranues Coles. The Jets can't cash in their Adams picks until next year, but they do have a third-round pick at his position, safety Ashtyn Davis.

Parallels aside, what remains to be seen is how the Jets respond to the Adams trade. In 2000, the Johnson deal galvanized the team. It motivated the players to prove people wrong, to show critics they could survive, even thrive, without their No. 1 receiver. History looks upon that season as a bust because of the 9-7 finish, but let's not forget the Jets started 6-1, including the historic comeback win against the Miami Dolphins.

The current, post-trade spin from the Jets is how they're "hungry" and "motivated." They should be. Adams was a terrific player for the Jets, but they should be able to withstand the loss of a safety.

Unfortunately for the Jets, they also lost Pro Bowl linebacker C.J. Mosley, who has opted out of the 2020 season because of coronavirus pandemic concerns. The silver lining is the Jets played 14 games without him last season and still finished seventh in total defense, but that was with Adams. No one said circling the wagons would be easy.

4. Reality check: Even though the Adams trade created no cap room in 2020, some folks might be wondering if Douglas will respond with a big-name, crowd-pleasing acquisition to make people forget about Adams.

The NFL's best at every position

Jeremy Fowler polled a panel of more than 50 coaches, execs, scouts and players to come up with top-10 rankings for 2020:

That's not how he operates.

Unless a great opportunity comes along, Douglas probably will roll his cap surplus (currently $21 million, per Over the Cap) into next year.

Jadeveon Clowney? We've been down this road before; the answer is no -- still.

Yannick Ngakoue? The Jacksonville Jaguars probably will wind up trading their disgruntled pass-rusher, but I would be surprised if it's to the Jets. They won't trade a first-round pick and pay $17.8 million for a (likely) one-year rental on the franchise tag. They see him as a one-dimensional player. He is productive in that one dimension (37.5 sacks in 63 games), but he's not an ideal fit in Jets coordinator Gregg Williams' base front.

5. Bell is ringing: If you follow Jets running back Le'Veon Bell on social media, you know he is fired up for the season. He's predicting a career year, which would be a remarkable turnaround after last season's disappointment. The man should be highly motivated because he knows he almost certainly will enter the job market again next offseason.

"He's not a guy I would ever doubt, just seeing what he's done throughout his career," Jets coach Adam Gase said.

Gase said Bell's knowledge of the system is "completely different than it was last year," so he expects him to have quicker reactions than before. He also talked about how Jets coaches used the offseason to study different ways they can get him the ball in the running and passing games.

Haven't we heard this before? Enough lip service; let's see it happen.

6. QB questions: Gase said they have had extensive internal discussions on whether to have a "quarantine quarterback" during the pandemic, a newfangled insurance policy that seems to be gaining momentum around the league. It's an interesting concept.

Think about it: What if the entire quarterback room tests positive two days before a game? What, then? The smart play would be to have an arm in the bullpen, a quarterback who participates in the meetings virtually, trains away from the facility and could step into the huddle at a moment's notice.

The logical candidate is David Fales, who already knows the Jets' playbook, but there are some logistics that need to be worked out. Would he count on the roster or the practice squad? What about salary? As Gase noted, the Jets have three games on the West Coast, which complicates matters. He said there's no urgency to make a decision.

7. Delay of game: For those wondering about the training camp schedule, the teams are having an extended ramp-up period that emphasizes strength and conditioning. The first non-pads practice is Aug. 12, likely open to the media, followed by the first padded practice Aug. 17. After 30 years of covering training camps, it certainly feels weird to spend the first two weeks at home.

8. The last word: "My first reaction when I saw the call [from Seahawks GM John Schneider], I thought I was in trouble. Then I realized I hadn't done anything. Then I was like, 'OK, this is weird. You don’t really talk to a GM every day.' All I remember is him saying, 'We traded you to the Jets.' It was almost like his voice echoed in my ear. He continued for speak for two more minutes and all I heard was, 'Jets ... Jets ... Jets.' At first, I was kind of stunned. I felt abandoned, like they just kicked me out, like they didn’t care about me or valued me there. Then I started to think about how much of a blessing this was, another opportunity." -- safety Bradley McDougald on his reaction to being traded.