The next one will be more complicated, even though it doesn't have to be.

The unheralded White, on the roster bubble at the start of training camp, delivered a passing performance for the ages Sunday and deserves to stay in the lineup as long as he keeps playing well. The man threw for 405 yards and three touchdowns in the Jets' 34-31 win against the Cincinnati Bengals, sparking the offense the way few quarterbacks in their history have done.

Yes, Zach Wilson is the so-called future. Yes, he was the second pick in the 2021 NFL draft. Yes, the Jets guaranteed him $35 million. He has a lot of talent, more raw ability than White, but he has a lot to learn about playing the position. Right now, White is the better quarterback. Let him play. 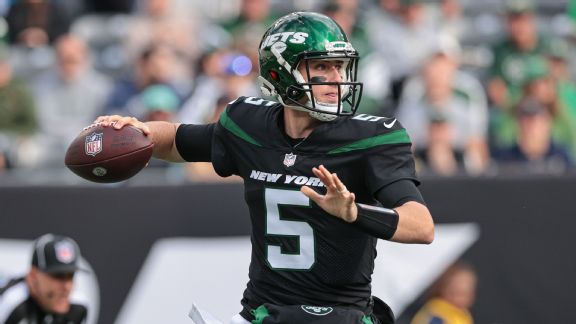 What you just heard was the sound of a door creaking open: the door of a potential quarterback controversy. Saleh could've said, "Mike was awesome, but Zach is our guy" -- but he didn't.

Fortunately for the Jets, they don't have to make that decision now. Wilson will need another game or two before he's ready to return from a sprained right knee, so it buys Saleh a little time. Who knows? Maybe White will crash to Earth on the road in prime time, although he didn't exhibit any signs Sunday of a player who can't handle big moments.

His poise was impressive. He started 11-for-11 and led the Jets to their first first-quarter points of the season, with offensive coordinator Mike LaFleur calling a more aggressive and creative game than he did previously with Wilson. White encountered adversity with interceptions on the second and third possessions, but he rebounded and played near-flawless football in the second half to rally the Jets from an 11-point deficit.

White finished 37-for-45, including 14-for-16 for 188 yards and two touchdowns in the second half. Until White came along, the Jets were 0-38 over the past five seasons when trailing by 11 points or more in the fourth quarter.

He had 37 pass completions, the most ever by an NFL quarterback in his first start. Comparison: Wilson hasn't had more than 37 attempts in any game.

Unlike Wilson, who has a tendency to play hero ball, White stayed within the structure of the offense and made simple completions. Not one of his attempts traveled more than 15 yards in the air, which is astounding. They called plenty of deep shots, Saleh said, but White wound up checking down. Maybe that strategy won't work against a defense that plays man-to-man, but it was genius against the Bengals' zone-based defense.

"I compare it all the time to a 3-point shooter in basketball," White said. "If they're struggling from 3 points, they try to get to the line and see the ball go in, so I compare it a lot to that. As a quarterback, you're seeing the ball completed and you're moving the chains. Whether it's 5 yards, 6 yards, it doesn't necessarily have to be a 20-yard throw to start the game. It helps get the offense in a rhythm, it helps the guys kind of calm down and things of that nature."

As Saleh would say, White played "boring" football, which is what he wants Wilson to do. At times, Wilson can be reckless, which is why he began the week co-leading the NFL with nine interceptions. He should go to school on Sunday's game tape, seeing how a quarterback plays the risk-management game.

White, 26, has been in the league for three-plus years, mostly as a scout-team quarterback for the Dallas Cowboys and Jets, which means he has seen a lot more than Wilson. He learned by watching. He didn't do anything wild, he just made smart decisions and threw to the open guy.

If he does it again on Thursday night and gets sent to the bench, the locker room will look sideways at Saleh. No doubt, Wilson needs to gain experience, so you could argue that keeping him on the bench is counterproductive. But we're not at that point yet. For now, they should ride the wave.